Polish Briefing: NABE will be created in early 2022 | Poland sent a proposal regarding Turów to Czech Republic 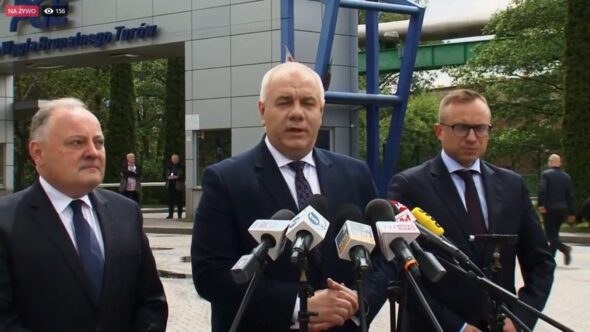 What goes on in Poland on the 16th of November.

NABE will be created in early 2022

Minister of State Assets Jacek Sasin announced that the government is finalizing talks with the social side on the National Agency of Energy Security (NABE) issue, which is to be established in early 2022. – Later, notification will be needed in the European Commission – added the Deputy Prime Minister.

– We have no choice but to go in this direction. The fact that the NABE project was created does not result from our willingness to make structural changes in the field of energy for the sake of changes, but it is the necessity to adapt to the climate policy of the European Union and the necessity of energy transformation, as well as carrying out large investments by State Treasury companies that are not the state of investment in the areas of clean energy should be made with the burden of coal-based energy. This project must be implemented – said Minister Sasin in an interview with the Polish Press Agency.

– We are now finalizing the talks with the social side, it is within reach right now and nothing will prevent us from finalizing this process. This should be early next year in terms of the actions we are taking here. There is also the issue of notifications in the European Commission and it is difficult to outline any deadlines there. I am convinced, because the first talks show that the European Commission is to understand that our actions are necessary – he emphasized.

Poland sent a proposal regarding Turów to Czech Republic

The Ministry of Climate and Environment sent a proposal regarding the provision of the article in the negotiated agreement on the Turów Mine. – At the same time, we invited our southern neighbors to urgently resume talks in Warsaw – Minister Anna Moskwa wrote on Twitter.

Last week, Poland received a proposal for the content of one of the disputed articles from the Czechs. – We are analyzing and we will talk about it in the coming days with our Czech partners – said the spokesman of the Ministry of Climate and Environment, Aleksander Brzózka.

Polish Briefing: Koreans challenge Americans in the race for Poland’s atomic deal | […]
Polish Briefing
What goes on in Poland on the 8th of November. Related posts: Polish Briefing: Turów Mine employees protest against the Czech demand to close the […]
More

Polish Briefing: Poland does not abandon the deadline for coal phase out in 2049 at COP26 […]
Polish Briefing
What goes on in Poland on the 5th of November. Related posts: Polish Briefing: Turów Mine employees protest against the Czech demand to close the […]
More