Polish Briefing: Offshore could cover 57 percent of Poland’s energy needs in 2040 | Solidarność cancels its protest due to the missile incident 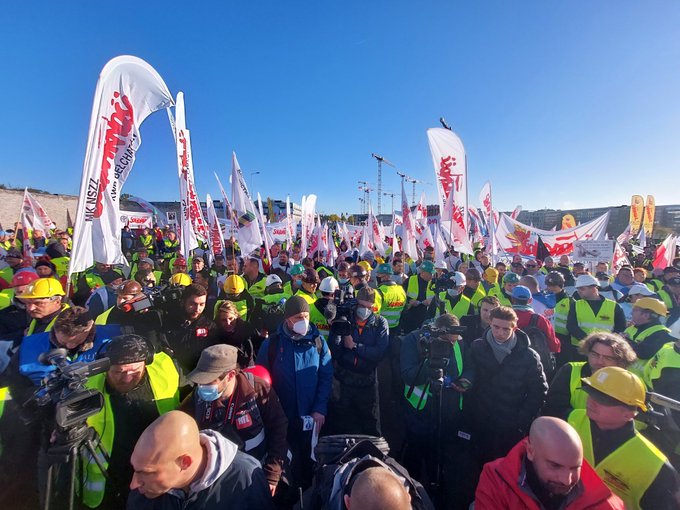 What goes on in Poland on the 17th of November.

The Polish Wind Energy Association (PWEA) has published a report on the potential of offshore wind energy in Poland. It shows that up to 33 GW of power could be created in Polish waters. The report also indicates 20 new areas in the Polish part of the Baltic Sea, including 18 in the exclusive economic zone and two in the territorial sea.

– Offshore wind energy is becoming a raison d’état. Urgent changes are needed for it to develop, said PWEA President Janusz Gajowiecki, at the opening of a recent conference.
In turn, Deputy Minister of Climate and Environment Ireneusz Zyska reminded that the conditions for offshore development in the Baltic Sea are good, because the sea is shallow, poorly salted, and there is good wind. – The potential of offshore wind energy in the Baltic Sea by 2040 may exceed 90 GW of installed capacity. In PEP2040, we assumed that offshore will be implemented in two phases, 11 GW would be built by 2040, which will ultimately account for 20 percent of the Polish mix. By 2030, 6 GW is to be built in Polish waters, but the potential is much greater. This is a great opportunity for the development of the Polish economy. About PLN 150 billion, will launch a value chain on the Polish market. We are glad that on October 13, Orlen and the Ministry of Infrastructure decided to build an offshore installation terminal in Świnoujście. These are fundamental steps that bring us closer to the goal, the turbine factory in Szczecin is to start operating in 2024 – said Zyska.

Solidarity was supposed to go on strike in the center of Warsaw for wage increases, but calls off the protest because of the incident in Przewodowo.

The March of Dignity organized by the Independent Self-Governing Trade Union Solidarity on November 17 was canceled due to the incident in Przewodów near the Ukrainian border, where a missile killed two people. Recently Ukraine has been the target of numerous rocket attacks by Russia. Nevertheless, Solidarity’s demands are well known.

– Our protest is a reaction to the lack of understanding of our proposal to introduce seniority pensions. We are in the process of energy transformation and we need to develop safeguards for people from liquidated industries – explained Bogdan Tkocz from the Tauron protest and strike committee. – Our demand on the guarantee of electricity prices is important for the entire economy. Today, small companies report their problems with the uncontrolled increase in electricity and heat prices, which affect the country’s economic growth. Our protest is also a response to the lack of a specific state energy policy and the constant lack of a specific person in the government responsible for the energy transformation.

Polish Briefing: A Russian-made missile fell near Hrubieszów | Dispute over energy could […]
Polish Briefing
What goes on in Poland on the 16th of November. Related posts: Polish Briefing: NATO is considering steps against Russia’s nuclear program […]
More

Polish Briefing: A mass breakdown in the heart of Poland | Americans agreed to sell tanks […]
Polish Briefing
What goes on in Poland on the 21st of February. Related posts: Polish Briefing: Polish companies are not threatened by the US decision on Iran, yet […]
More