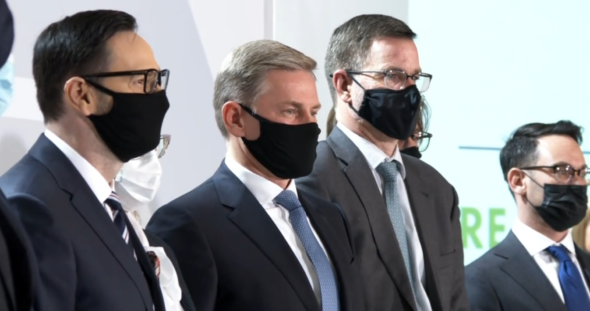 What goes on in Poland on the 8th of December.

PKN Orlen and Synthos Green Energy have signed an investment agreement under which a company dealing with MMR and SMR nuclear technologies will be established. The first small modular reactor would be built in Poland in 2029. The technological partner is to be GE Hitachi.

“PKN Orlen is a multi-energy concern. A year ago, we presented a development strategy with energy being a very strong pillar. We are a leader in energy transformation, we conduct gas investments, we took over the Energa Group, but we also look at zero-emission energy, wind farms on land and at sea. Such a large company must think 20-30 years ahead. Decisions must be made here and now, and we are doing that. Today we signed an investment agreement. A company will be established between Orlen and Synthos, which will work on MMR and SMR technologies. They will prepare for the implementation of these technologies and cooperate with the PAA on the necessary changes to the law. This company will have exclusive technology, which will enable investments for the needs of our country,” said Daniel Obajtek, president of PKN Orlen. “GE Hitachi is a leader in this technology and the capability to build such reactors. It is the most advanced company in MMR and SMR technology. Canada chose this technology, the first such reactor will be built there. We would like the next reactor to be built in 2029 in Poland. GE Hitachi has had experience with the nuclear power industry since the 1950s. It is a miniaturized version of large reactors. It is a well-known technology that is ready to be implemented. The agreement with Canada gives it credibility. Nuclear power is our future, and the project does not exclude investments in a large nuclear power plant, but it is a task for the state,” he said. “A small reactor is the most economical solution today, it is a matter of safety. The energy production of SMR is 30 percent cheaper than the most efficient gas-fired power plants, and the cost of building 1 MW is 30 percent cheaper than a large reactor. I hope that the Polish supply chain will account for 50 percent of this investment,” he added.

Energa ensures that there is no new schedule for the implementation of the Ostrołęka C Power Plant project, i.e. the construction of a gas unit instead of a coal one in cooperation with Orlen and PGNiG. However, the assumptions will be revised.

BiznesAlert.pl informed that the European Investment Bank intends to abandon investments in gas, and other financial institutions are following suit. The discussion on the taxonomy of the European Union may end in December, and it is expected that natural gas will be considered a temporary solution on the way to a full energy transformation. The EIB will not finance gas from 2022. More and more financial institutions are afraid of investing in gas.

The Poles, however, do not change their plans and intend to build a gas block in Ostrołęka, which will replace the unfinished coal-fired project, which was to have a capacity contract from 2023. The contract means the project will receive power market subsidies in exchange for being available from this time limit. The new concept is to be implemented so that deliveries are possible in 2026.

“According to the current schedule, the power plant is to be ready to meet the obligations resulting from the planned capacity contract from 2026,” informs Krzysztof Kopeć, director of the Energa press office. This also explains last week’s annex to the PKN Orlen-Energa-PGNiG contract. “The conclusion of the annex to the investment agreement between PKN Orlen, Energa and PGNiG results from the need to make additional arrangements as to the shape of cooperation and involvement of individual parties in the construction of the gas block in Ostrołęka. The parties decided that the model adopted in December 2020 requires a revision, due to the organizational and financial assumptions adopted for the initial period of implementation of the gas unit in Ostrołęka,” the spokesman for Energa said.