Polish Briefing: Orlen wants the merger with Lotos to finish in the summer | The Lublin Triangle wants stricter sanctions against Russia 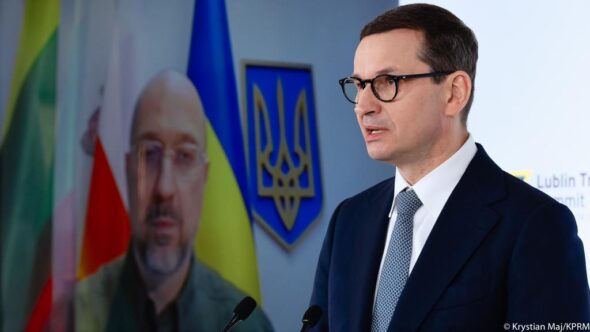 What goes on in Poland on the 15th of March.

Orlen wants the merger with Lotos to finish in the summer

The head of PKN Orlen, Daniel Obajtek, announced that the merger of his company with Grupa Lotos should be finalized in June-July 2022.

“It’s a purely corporate decision. This exchange parity is technically to be determined. This is not a process to be stopped by any repercussions and fluctuations in the world,” said the president of PKN Orlen to BiznesAlert.pl.
In response to the expectations of the European Commission, Orlen proposed, among other things, that a new joint venture will be established where Saudi Aramco will acquire 30 percent of shares, while some of the company’s petrol stations will be taken over by Hungary’s MOL.

The Prime Minister of the Republic of Poland met with his counterparts from Lithuania and Ukraine in the Lublin Triangle format. Poland calls for financing aid to Ukraine from Russian funds frozen as a result of the sanctions. Ukrainians are calling for an embargo on raw materials from Russia.

“This meeting of the Lublin Triangle takes place in a situation when one of the partners is directly at war, and the totalitarian aggressor threatens other countries on the eastern flank of NATO and the EU and wants to threaten the whole of Europe,” Prime Minister Mateusz Morawiecki said.

“While the war is engulfing Ukraine, we must be consistent in our actions towards Russia and the sanctions imposed on Russia. I would like to thank the Republic of Lithuania for joining us in the determination at the last meeting of the Council of Europe in Paris,” he said in relation to the EU talks on sanctions against Russia in Versailles in Paris. “We appeal from here, from Warsaw, from our meeting of the Lubelski Triangle – freeze the assets of the Russian state completely, confiscate them, freeze the assets of the Russian oligarchs. Let them serve these defenseless victims of Putin’s regime,” the PM urged.

“We are working on the fourth package of sanctions and we will work on the next ones until the last Russian soldier leaves Ukrainian land,” Morawiecki assured.