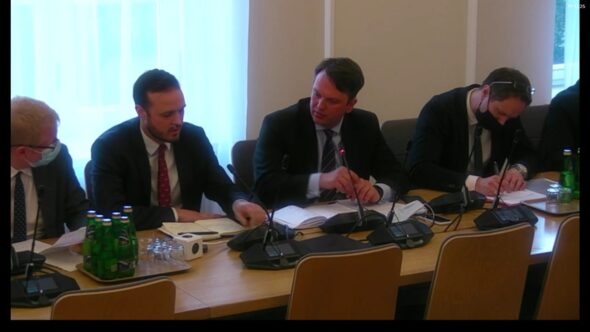 What goes on in Poland on the 10th of February.

On February 9, 2022, Polska Grupa Energetyczna (PGE) submitted another application to the Ministry of Infrastructure for a new location permit for an offshore power plant in the Baltic Sea. This is PGE’s seventh such request. The area it covers is located on the Oder Bank.

“We implement our offshore energy investments based on the basis of a well-thought-out strategy and economic calculation. We are interested in promising areas in the Baltic Sea, which will allow us to develop in the offshore area in the near future. According to the plan, we are consistently applying for location permits for our wind farms in other areas – this time in the area located at the height of Szczecin. With the last localization application submitted, we already have seven of them,” commented Wojciech Dąbrowski, president of Polska Grupa Energetyczna.

Currently, PGE is implementing investments in the Baltic Sea with a total capacity of approx. 3.5 GW based on three location permits obtained in 2012. The works carried out in these areas are conducted according to the schedule. In the coming months, obtaining important administrative decisions regarding, inter alia, environmental permits for onshore infrastructure related to power evacuation, and then construction permits. Tenders for individual stages of the investment are underway.

During the meeting of the parliamentary committee on energy, climate and state assets, representatives of the government and gas companies explained the reasons for the increase in gas prices in Poland.

“The cause of the increase in gas prices is known. The most important fact is that from 2021 the global economy is recovering from the crisis related to the coronavirus pandemic. This causes an increase in demand. On the other hand, there is a reduction in gas transmission via Russia. Russia was responsible for 49 percent of gas supplies to Europe. Gazprom stopped sending gas to Germany via the Yamal gas pipeline at the end of December. Additionally, the Russian company emptied instead of filling gas storage facilities in Western Europe. Gazprom is deliberately limiting the supply in order to put pressure on the launch of the Nord Stream 2 gas pipeline. In addition, Russia’s military pressure in Ukraine has been growing recently, which in the event of an aggression may mean that gas transmission via Ukraine will be closed,” Deputy Minister of State Assets Piotr Pyzik said.

“54 percent is the average value of increases in terms of consumption. About 3 million customers are in the W.1 tariff and the prices increased for them by about 40 percent. There were no increases of several hundred percent that affected individual recipients. The ruling party agreed to cut gas prices for businesses by 25 percent. As of February 1, it is another 10 percent. This is an automatic reduction, nothing needs to be done. It is valid until the end of March. The company buys gas on the exchange. The prices on exchanges are reflected in our prices for clients. From January 1, several entities, such as housing communities, hospitals and clinics, will enter tariff protection. It will also reduce gas prices for these customers,” said Robert Gut from the management board of PGNiG Retail.