Polish Briefing: Poland and Germany united on Ukraine, but differ on nuclear | PGNiG to accelerate the second gas terminal 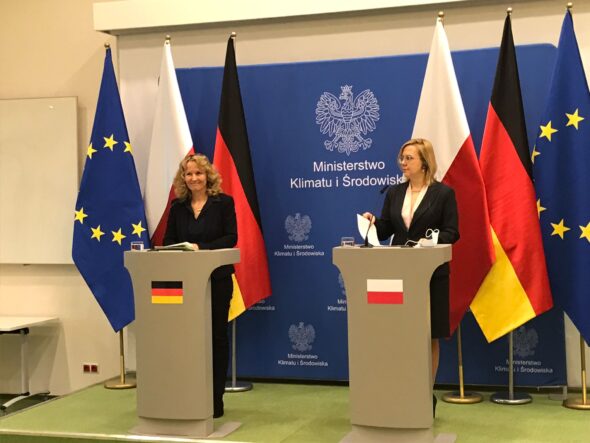 What goes on in Poland on the 23rd of February.

Poland and Germany confirm the unity on Ukraine, but differ on nuclear power

Yesterday in Warsaw, the ministers of the environment of Poland and Germany, Anna Moskwa and Steffi Lemke met. It was the first official visit of the new minister to Poland. The parties talked about the neighborly cooperation in the field of environmental protection, but also issues such as the Russian-Ukrainian conflict, Nord Stream 2 and nuclear energy.

“We have just completed a bilateral meeting in the format of environment ministers. Thank you for the long and fruitful conversation. We talked about many important topics. The only response to a difficult geopolitical situation can only be unity and cooperation. We also touched upon the energy transformation in Poland and Germany. The development of renewable energy sources is extremely important, Poland has met its European goal, and we are increasing our ambitions for the coming years. The topic was also climate change, the manifestation of which are floods. Some of these phenomena take place on the Odra River, today we promised to intensify the dialogue on flood protection on the Odra River. We talked about ways to reduce CO2 emissions, we have much experience in this. We also touched on the protection of the Baltic Sea, which is our common interest. I have accepted the information that the German government and parliament are adopting a project to remove chemical weapons from the seabed, it may be possible to establish cooperation here,” said Anna Moskwa, Minister of Climate and Environment.

PGNiG will strive to accelerate the second gas terminal

PGNiG President Paweł Majewski said that the floating regasification facility (FSRU), aka the second gas terminal should be launched under the current conditions. Former Russian president Dmitry Medvedev has threatened Europe with expensive gas in response to the freezing of the Nord Stream 2 project in Germany.

“Welcome to a world where Europeans will pay USD 2,000 for 1,000 cubic meters of gas,” he tweeted in response to Germany’s decision to suspend the Nord Stream 2 project due to Russia’s aggression on Ukraine and its recognition of para-states in eastern Ukrainian territory.

PGNiG hopes that Poland will be able to quickly launch the second gas terminal, i.e. the Regasification Facility in the Gulf of Gdańsk. According to BiznesAlert.pl, the company is now to trying to make the platform operational as soon as possible. The gas transmission operator Gaz-System originally planned to import the FSRU in 2027-28 and offered 6.1 bcm capacity in the demand study.
“We are looking with hope at the quick finalization of the FSRU project in the Gulf of Gdańsk,” said president Paweł Majewski at the meeting with journalists. BA’s interlocutors from the gas sector argue that, if necessary, it will be possible to bring the FSRU vessel for lease in Poland faster, even within a year.

Polish Briefing: PGNiG expanding its upstream portfolio on the Norwegian Continental Shelf
Polish Briefing
What goes on in Poland on the 11th of February. Related posts: Polish Briefing: Denmark won the war of nerves in case of Nord Stream 2. Russia is […]
More