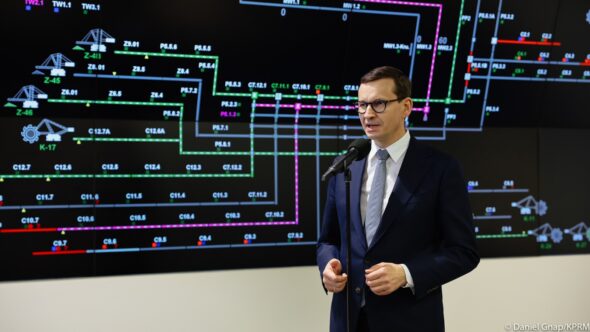 What goes in Poland on 11th of March.

Poland is asking for European embargo on Russian fuels

Polish prime minister Mateusz Morawiecki argued in Versailles for European embargo on gas, oil, oil fuels and coal from Russia as an answer to Russian further aggression against Ukraine. European Union did not take such step yet.

European Union leaders have met in Versailles, Paris. They warned Russia about a possibility of further sanctions connected to Russian war against Ukraine. – European Union has to take all the necessary steps to become independent from Russian fuels and resources used for their production and Russian transmission infrastructure. We should free ourselves from Russian imports dependency as soon as possible – said Morawiecki. Poland is arguing for European Union’s embargo on Russian fossil fuels.

Polish minister of foreign affairs made a call to prince Faisal bin Farhan Al-Saud, foreign minister of Saudi Arabia. The topic was energy cooperation in the face of Russian aggression against Ukraine.

The consultations covered the most important areas of bilateral cooperation, with a particular focus on the current international situation. Emphasising the importance that both countries attach to developing political contacts, the ministers expressed satisfaction with their strong growth. They agreed about the need for a continued fulfillment of a bilateral economic cooperation potential, including in particular the energy sector – informed Polish MFA.

Poland is ready for EU oil embargo on Russia. Poland is importing about 65 percent of oil from Russian suppliers. The rest comes outside of Russia, f.e. from Saudi Arabia.