Polish Briefing: Poland wants a reform of the climate policy, says Morawiecki after a meeting with Olaf Scholz | Foreign ministers of Poland and Germany share concerns about Nord Stream 2 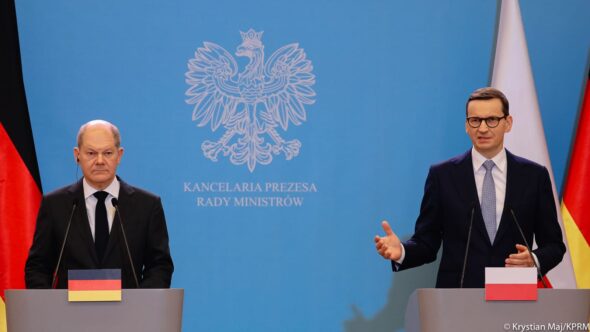 What goes on in Poland on the 13th of December.

Poland wants a reform of the climate policy, says Morawiecki after a meeting with Olaf Scholz

The Prime Minister of the Republic of Poland Mateusz Morawiecki and German Chancellor Olaf Scholz met in Warsaw. The Polish PM reiterated that Poland was opposed to the launch of NS2, as it is a threat to Ukraine, proposed to combat speculation in the EU climate policy, and stressed Poles and Germans were in agreement about the crisis on the border with Belarus.

“We talked about our eastern border, which is also the eastern border of the European Union and NATO. I introduced the Chancellor to the changing tactics of the Lukashenka regime,” said Prime Minister Mateusz Morawiecki. “The border must be tight, so that the EU can defend itself and decide on its own future. We also discussed the possibility of introducing new sanctions,” he added.

“Our neighbor, Ukraine, is in a worse situation as a result of the opening of a new gas connection, Nord Stream 2. We, Slovakia and the eastern countries of the European Union, are also in a more difficult situation. These countries may be blackmailed by Russia. That is why we are building the Baltic gas pipeline and becoming independent from Russia, but Ukraine is completely dependent when it comes to gas. We would very much not want it to succumb to Russian blackmail, as this will destabilize the eastern flank of NATO and the European Union,” Morawiecki warned. “I drew attention to risks that the opening of the NS2 pipeline entails, and to the fact that the scenario we have warned about – the worsening of the situation in Ukraine – is now coming together,” he added.

“We talked about Ukraine because we know that dangerous operations on the border are taking place there. It is clear that Europe must make it clear that we do not accept this, nor do we agree with what is happening there. Together, we emphasize that the inviolability of borders in Europe is the foundation, and we will not tolerate its undermining,” said the Chancellor.

“I know from the coalition agreement that climate policy is an absolute priority for Germany. We point out the problems that create problems for people. Today, energy is more and more expensive, gas blackmail leads to inflation, raising prices for households. We don’t want people to suffer. Gazprom’s monopolistic practices are one thing, and the increasingly higher prices of EU ETS CO2 emission allowances are another reason. I told the Chancellor that during the next European Council I would propose that only those entities that must receive CO2 emission allowances should participate in this market in order to limit speculation,” announced the Prime Minister.

“We talked about the ways of responding to the growing energy and fuel prices,” said Olaf Scholz and did not refer to Prime Minister Morawiecki’s proposal. In his opinion, the discussion with the European Commission on the rule of law in Poland should end with an agreement. Poland is currently in a dispute with the EU over its reform of the justice system, the EU has threatened it would prevent Poland from receiving the money from the Reconstruction Fund if the reform is continued.

The new head of German diplomacy, Annalena Baerbock, visited Warsaw for a meeting with her Polish counterpart Zbigniew Rau. Both expressed concerns about the Nord Stream 2 gas pipeline project, although Chancellor Olaf Scholz does not want to shut it down, unless Russia attacks Ukraine.

The Ministry of Foreign Affairs of the Republic of Poland reports that with regard to issues on the international agenda, the ministers discussed, inter alia, the situation on the Polish-Belarusian border and exchanged views on the threats posed by Russia’s increasingly aggressive policy. One of the topics was also energy security, in particular Nord Stream 2.
The Polish ministry reports that Minister Annalena Baerbock shares Poland’s fears and critical attitude towards the project, especially in the context of threats related to eastern policy. “We are pleased with such an unequivocal position related to the implementation of this gas pipeline and we hope that it will find a concrete expression in the actions of the German government,” emphasized Minister Rau.

There was no mention of Nord Stream 2 in Baerbock’s comments. The new German Chancellor, Olaf Scholz is a member of the SPD party, which was in favor of the project, contrary to Minister Baerbock’s Green party, which opposed it. This topic was the subject of a dispute between the coalition partners and was ultimately not addressed directly in the coalition agreement. Chancellor Scholz stated that if Russia attacks Ukraine, supplies via Nord Stream 2 will not be launched.

“I share the view that Nord Stream 2 is a threat to peace in Europe. Poland will demand that this malicious project be closed,” argued Rau after a meeting with his German counterpart.