Polish Briefing: Poland wants more LNG from Qatar in Europe | Tremors at the Bielszowice Mine 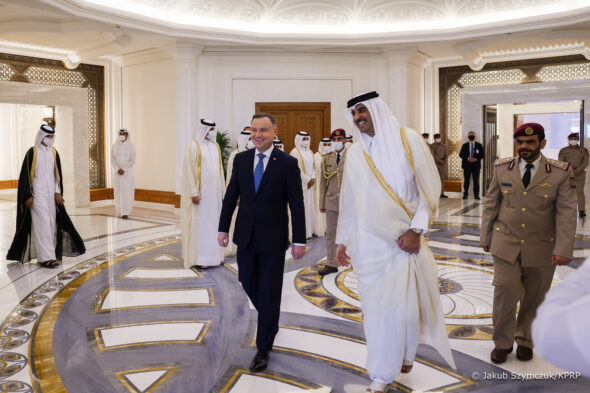 The President of the Republic of Poland visited Qatar. He was accompanied by the president of PGNiG, which imports LNG from this country. Politicians talked about increasing gas supplies from outside Russia to the Old Continent, in order to avoid its blackmail.

The President of the Republic of Poland, Andrzej Duda, paid an official visit to the State of Qatar. On December 5, he met the Emir of Qatar Sheikh Tamim Bin Hamad Al Thani. During the 2nd Polish-Qatar Economic Round Table, the president pointed out that Polish-Qatar relations over the last decade have acquired an absolutely strategic importance. He mentioned that since 2009 we have been connected by a long-term contract for the purchase of Qatari liquefied natural gas, which is collected at the LNG terminal in Świnoujście.

“Currently, Poland imports about 2.1 million tons of liquefied gas annually from Qatar. Last year, the value of these deliveries exceeded half a billion dollars,” he said. “I would like to emphasize that Poland, as an important importer of Qatari gas, has aspirations to also become an important supplier for Qatar of our high-quality services and products. I know from conversations with Polish entrepreneurs that we have an interesting, unique technological offer for Qatar,” he emphasized.

PGNiG CEO Paweł Majewski accompanied the President on his expedition. “From the point of view of PGNiG’s interests, Qatar is a very important place, in particular Ras Laffan – a gas terminal from which several gas carriers are sent every day, and some of them go to Poland,” said the Polish Press Agency. “The gas terminal (in Świnoujście) is still expanding, there will be – we hope – a floating in the Bay of Gdańsk. We are concluding new contracts with the United States for LNG supplies, and Qatar remains our main partner,” he added.

Tremors at the Bielszowice Mine

Rescuers reached one of the two miners who were trapped in the Bielszowice Mine. On Saturday morning there was a rock fall over a distance of several dozen meters. “The man is conscious, after being taken to the surface, he will be hospitalized,” said the spokesman of Polska Grupa Górnicza, Tomasz Głogowski in an interview with the Polish Press Agency (PAP).

On Saturday morning, there tremors hit the Bielszowice Mine. As a result of the event, communication with two miners was interrupted. One of them was reached on Saturday night.

“According to the information provided, the miner is conscious and responsive, he has injuries that will be assessed by the doctor. He will be transported to the hospital,” said the spokesman for PGG.

“The rescuers reached the victim about half an hour after midnight. So far, there is no visual or voice contact with the other victim. The second miner is probably trapped 5-10 meters from the place where the first miner was found,” the spokesman said.

Polish Briefing: PGNiG is launching a battle for the LNG market in Gdynia
Polish Briefing
What goes on in Poland on the 20th of June. Related posts: Polish Briefing: Increased fuel fee withdrawn. Poland may not receive EU money Polish […]
More

Qatari LNG feels at home in the Baltic Sea. More deliveries are coming
LNG
The Al Halma tanker reached the LNG terminal in Świnoujście carrying another liquid gas delivery. The Q-Flex Al- type tanker with a capacity of 210 […]
More