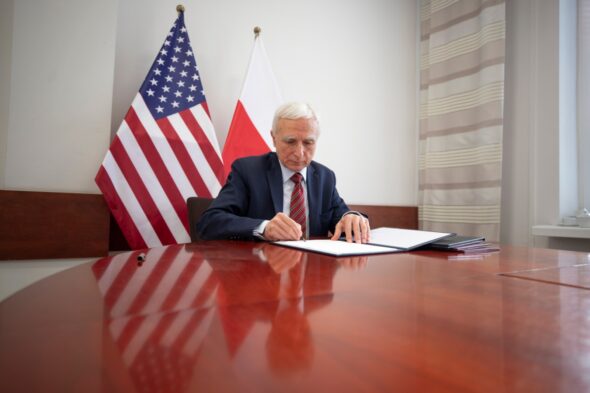 What goes on in Poland on the 27th of October.

Naimski: We want to rely on proven nuclear technologies

The government’s plenipotentiary for strategic energy infrastructure Piotr Naimski told the EnergyIntel portal that Poland was looking for a partner for a nuclear power plant for the entire cycle from design, through construction, operation and decommissioning.

Minister Naimski assessed that, taking into account the experience in the construction of nuclear power plants in European countries, the most important thing is to focus on proven technologies. He noted that SMR technologies are only in the testing phase and will appear commercially at the earliest in the 2030s – Poland has neither the time nor the money for this, so we want to build nuclear power plants based on existing solutions – he said.

An important element of the contract is the choice of a partner. It is with him that Poland will be associated for a period of over one hundred years, counting the time of design, construction and operation. The financing model has not yet been developed, but the government plenipotentiary emphasizes that it will have to be compliant, inter alia, with EU competition law.

Commenting on the agreement signed with the United States, Naimski said that this does not determine the final choice of technology for the future Polish nuclear power plant. He stated that the technology provider will be selected after direct negotiations in line with EU law.

Tomasz Nowacki, director of the nuclear energy department at the Ministry of Climate and Environment, talked about preparations for the construction of a nuclear power plant in Poland, possibly with the Americans in an interview for BiznesAlert.pl.

–  The more technology, the better the decisions. All of them should be followed. However, the needs of Poland and the world regarding clean energy are here and now, they should be realized with the help of cost-effective and proven solutions, such as large-scale reactors. They are the safest. There has not been a single breakdown of the pressurized water reactor with large releases. For now, SMRs exist in the minds of designers and on the hard drives on which their projects are saved. Nobody is building them except for the only demonstration project in Argentina. We cannot build a strategy on the basis of solutions that do not exist. It wouldn’t be responsible. Mature decisions on SMRs can be made only after gathering operational experience from the first units that are to be put into service at the earliest around 2030. To this should be added a period of 1-2 fuel campaigns, which will show whether the practice confirms the theoretical assumptions and what else needs to be improved in these constructions. Besides, it is equally important – small reactors are small. With Polish needs reaching 9 GWe, this means the construction of even 150 small reactors instead of 5-9 large ones, which contradicts the economies of scale and means a larger environmental footprint. However, this does not mean that the development of these technologies should not be looked at. In the future, they may complement a large program, especially with regard to specific applications, such as emission-free heating – said Nowacki.

Polish Briefing: Brussels protected Poland from an even worse gas contract with Russia
Polish Briefing
What goes on in Poland on the 3rd of July. Related posts: Polish Briefing: The Poland-US MoU will facilitate talks on the nuclear energy Polish […]
More