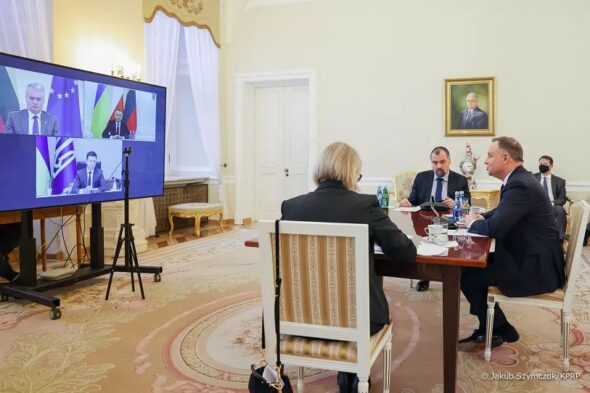 What goes on in Poland on the 3rd of December.

Presidents of Poland, Lithuania and Ukraine together against Nord Stream 2 and Russian aggression

The presidents of Lithuania, Poland and Ukraine spoke online. They adopted a stance condemning Nord Stream 2 and Russian aggression in the 30th anniversary of the recognition of Ukrainian independence by Poles and Lithuanians.

The leaders of these three countries expressed their support and solidarity in the face of the border crisis “managed by Minsk” on the Lithuanian-Belarusian and Polish-Belarusian borders. They expressed concerns about “further weakening of the security and stability of the region and the evolving threats, including hybrid ones, resulting from, inter alia, continued Russian aggression”.

The announcement says that the presidents declared a strong commitment to further strengthening Europe’s energy security and therefore expressed clear concern about the Nord Stream 2 project, which poses a security challenge for Europe. – They expressed their readiness to cooperate against the monopolization of the gas market in Europe by Russia, which uses raw materials as a geopolitical tool – we read.

Leaders also called on the international community to deepen sanctions against Russia for its aggression against Ukraine and to call on the Kremlin to de-escalate by withdrawing troops from the Ukrainian border and the occupied territories in the east of the country.

The “Fit for 55” package, as well as electricity and gas prices, are the main topics on the agenda of the European Union Council for Energy. The event, which took place on December 2, 2021 in Brussels, was attended by Minister of Climate and Environment Anna Moskwa and Deputy Minister Adam Guibourgé-Czetwertyński. Minister Moscow also held a number of bilateral meetings, including with EU Energy Commissioner Kadri Simson.

As Minister Moscow emphasized, since the beginning of the debate on the problem of high energy prices, Poland has been pointing to two of its key reasons – ignoring the negative role of the dominant supplier on the natural gas market and the excessive increase in the prices of ETS emission allowances. – In order to mitigate the potential economic and social effects of the current energy price crisis, we plan to introduce a number of national measures, such as the shielding allowance for households and temporary tax cuts, including on VAT or excise duty. However, we are concerned that some recent Commission proposals, such as those in the revision of the Energy Tax Directive, will limit Member States ‘flexibility to introduce such measures in the future,’ she said.

The head of the Ministry of Climate and Environment also pointed out that for a stable environment for the development of the internal gas market, it is necessary to ensure and use appropriate measures discouraging enterprises from taking actions that are inconsistent with competition law or the principles of the internal market. – In response to the current crisis, it is justified to conduct an in-depth analysis of the behavior of some suppliers, which in our opinion is a violation of the provisions of the Treaties – she emphasized.

Polish Briefing: Morawiecki promises millions for a fight against smog. Resistance within […]
Polish Briefing
What goes on in Poland on the 18th of September. Related posts: Polish Briefing: A part of North-South Corridor finished. Three Seas Initiative […]
More