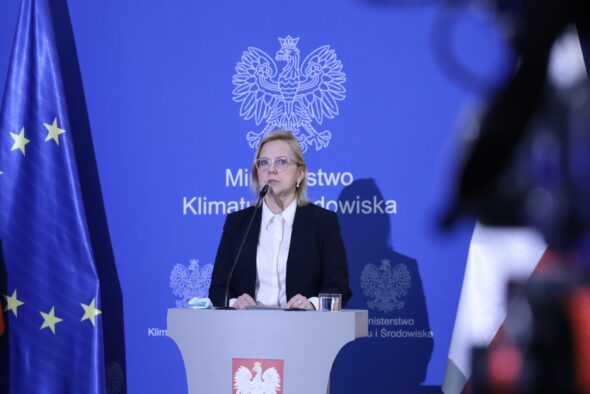 What goes on in Poland on the 17th of March.

“In my opinion, achieving the goals of the Fit for 55 package, i.e. reducing the emission of greenhouse gases in Europe by at least 55 percent by 2030, is impossible today,” said Minister of Climate and Environment Anna Moskwa in an interview with Zielona Interia.

Moskwa was asked whether the European Union should introduce an embargo on Russian gas, oil and coal. “In our opinion, this type of sanction would be effective against the Russian Federation. We are calling for moving away from purchasing hydrocarbons from Russia. Of course, we are also observing what other European countries are saying on this subject. I listened to the speeches of individual ministers at the Monday EU Council. A group of countries is skeptical because of their own energy security and the lack of infrastructure to quickly replace Russian resources. There are countries that import 100 percent of gas from Russia. These include, for example, Austria and Latvia, and Bulgaria is also largely dependent,” she said in an interview with Zielona Interia.

According to the minister, the decision to abandon gas imports from Russia would be painful for Poland, but it is not unrealistic. “Our companies have been taking steps to diversify the supply of fuels for a long time. Among other things, the decision to merge Lotos with Orlen is related to this. The percentage of Russian oil in our mix is ​​declining every year, and we have been doing it consistently since 2015. We are convinced that the aim of the sanctions is really to be very severe. It would certainly be a challenge for us, but taking into account also that we have large stocks and the ability to diversify, we would be able to cope with this change, because the situation is absolutely unique,” she emphasized.

“We are currently discussing additional gas supplies from Poland to Ukraine. I do not want to talk about the details of trade talks,” Majewski told reporters. He emphasized that PGNiG has been trading gas with Ukraine for several years.

“It is worth recalling the last transaction, when, together with the Ukrainian partner ERU, we sold a batch of American gas to Ukraine, which arrived in the form of LNG at the gas terminal in Świnoujście ,” he said. The methane carrier with this cargo arrived at the Polish LNG terminal in February.

Polish Briefing: Still no change of Naftogaz’s CEO, PGNiG still without a deal
Polish Briefing
What goes on in Poland on the 23rd of March. Related posts: Polish Briefing: Poles want to diversify sources of gas supply to pay less and feel safer […]
More