Polish Briefing: Solidarity in the face of the border crisis must be the trademark of the V4, says Polish PM | PGNiG becomes Industry Partner of Space3ac accelerator 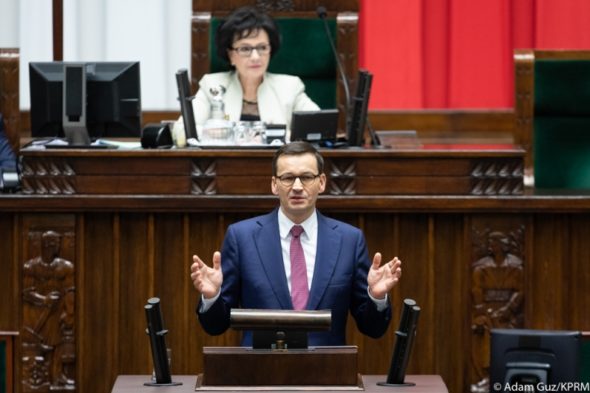 What goes on in Poland on the 24th of November.

Morawiecki: Solidarity in the face of the border crisis must be the trademark of the Visegrad Group

Prime Minister Mateusz Morawiecki met with the leaders of the Visegrad Group (V4) countries in Budapest and with the Prime Minister of the Republic of Croatia in Zagreb. The main topic of both meetings was the situation on the Polish-Belarusian border of the European Union.

The Prime Minister emphasized the solidarity of NATO and European countries in the face of the current, multidimensional political crisis – related to migration, but also energy and cyber attacks. “Solidarity is a trademark of the Visegrad Group,” said the head of the Polish government, thanking the leaders of the Czech Republic, Slovakia and Hungary. “The prime ministers of these countries expressed their support, but also support for sanctions, financing by the European Union of border protection and offers of assistance,” the Chancellery of the Prime Minister reports.

The prime minister emphasized the need for joint action and reaction in the face of the crisis. He emphasized that we protect not only the Polish border, but also the border of the European Union and NATO. According to Morawiecki, joint diplomatic activities bring results, e.g. in the form of a reduced inflow of migrants to Belarus.

“The prime minister emphasized that this crisis was not only due to the situation at the border. According to him, this phenomenon should be viewed more broadly, noticing other elements as well. One of them is the energy dimension, which is influenced by high prices of CO2 emission allowances and the manipulation of gas prices. These factors directly translate into the high cost of living and inflation that affects many European countries. The head of the Polish government also drew attention to the constant fight against disinformation, cyber attacks and hostile propaganda,” the Chanceller reports.

Polskie Górnictwo Naftowe i Gazownictwo has become a partner of Space3ac. International teams that apply for the acceleration programme will have the opportunity to receive financial support and present their solutions to PGNiG.

Startups in the Space3ac accelerator will receive financial support from the Polish Agency for Enterprise Development (PARP) of up to EUR 65,000, assistance in setting up business operations in Poland, mentorship support, and an opportunity to work with PGNiG and other companies. The accelerator offers several options to collaborate with industrial and corporate partners, including pilot implementations, partnership projects between large companies and startups, commercial and investment options. Applications for Space3ac Poland Prize II may be submitted until the end of November 2021, with the next round planned for the first quarter of 2022.

“In order to maintain continued business growth, we want to embrace innovation. For the entire energy industry, the coming years will be a time of great challenges and deployment of innovation projects that will allow us to complement traditional energy sources with green and zero-carbon fuels in the future. As we remain open to collaboration with other companies both in optimising our own processes and expanding into new business areas, I‘m glad to welcome Space3ac as our new partner,” says Arkadiusz Sekściński, Vice President of the Management Board for Development, PGNiG SA.

In the Space3ac accelerator, PGNiG will be looking for young companies specialising in projects concerned with optimising processes with the use of artificial intelligence, hydrogen technologies, fuel cells, water purification and development of new production forecasting tools for electricity and heat, taking into account the changing technology and economic environment. The company is also interested in marketing automation, Big Data processing, employer branding, and gamification solutions. A full description of the solutions that may be submitted under the accelerator programme can be found on the company’s website.

“We are glad that a company that has been successfully collaborating with startups for several years and has its own support instruments for this type of projects has joined the programme as its partner. Thanks to the accelerator’s experience and fields of specialisation we can offer partners like PGNiG the opportunity to work with top startups,” says Wojciech Drewczyński, Space3ac CEO.

Polish Briefing: PGNiG expanding its upstream portfolio on the Norwegian Continental Shelf
Polish Briefing
What goes on in Poland on the 11th of February. Related posts: Polish Briefing: Denmark won the war of nerves in case of Nord Stream 2. Russia is […]
More