Polish Briefing: Solidarity trade unionists protest in Luxembourg and at the Czech embassy in defense of the Turów Mine 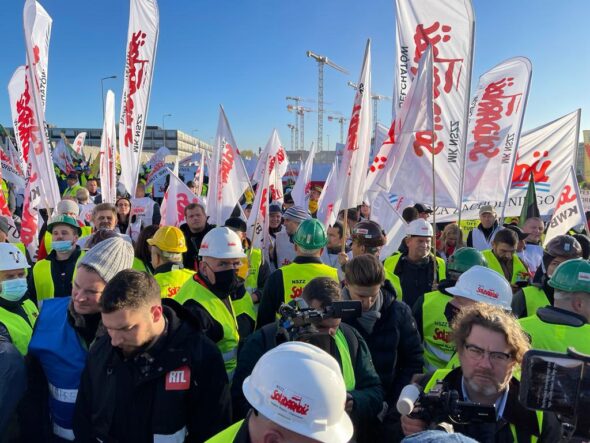 What goes on in Poland on the 22nd of October.

Today at 10 am Polish time a protest by Solidarity trade unions started before the Court of Justice of the European Union in Luxembourg in defense of the Turów Mine, which is to stop work pending the proceedings of the Tribunal in the dispute between Poland and the Czech Republic. The trade unionists also want to visit the embassy of Poland’s southern neighbor.

“The European Union has banned the use of barbed wire to fence pastures for cattle. Meanwhile, it used this wire to fence the seat of the Court of Injustice in Luxembourg, thus giving a clear signal that it treats trade unionists from Poland worse than cattle!,” write the unions of the Solidarity National Secretariat for Mining and Energy.

“There will be a picket at 10.00 at the seat of the Court of Injustice (Court of Justice of the European Union – ed.), which will last about two hours. We want to submit a petition prepared by us. We do not yet know whether anyone will accept us or whether they will receive this petition. In the worst case, when it turns out that we won’t have anyone to hand it to, we will have to stick it or nail it to the door. Then we intend to go to the Czech embassy, which is about 1,200 meters away from the Court. There will also be a picket and we will hand out a petition addressed to the Czech government,” explained Chairman Jarosław Grzesik. Around 2,000 protesters in total were headed for Luxembourg.

Duda in defense of the Turów Mine: We give time to think, otherwise we will set Europe on fire

The Solidarity trade unions are protesting in Luxembourg against the decision of the Court of Justice of the European Union to secure the Poland-Czech Republic dispute over the Turów Mine by stopping its work until the end of the court trial.

“We have the right to work in our nation-state, not some European entity,” said the chairman of Solidarity, Piotr Duda.

“We will not make mistakes from the 1990s, when the European Commission closed our mines, steel mills and shipyards. We will not allow it any longer,” Duda said. “We give you time to think. If it does not, we will set fire to Europe in our hearts. We will resist these idiots,” he said.

Polish Briefing: Coronavirus can increase the costs of energy transition
Polish Briefing
What goes on in Poland on the 14th of May. Related posts: Polish Briefing: Poland sees the potential of renewable energy sources Different faces of […]
More

Polish Briefing: Tchórzewski for the merger of Orlen-Lotos as it may help build the NPP
Polish Briefing
What goes on in Poland on the 19th of February. Related posts: Polish Briefing: Against unfair practices. Agreement with Ukraine to be ratified […]
More