Polish Briefing: Tauron and PGNiG share a letter of intent regarding ECSW | The golden weld of the Poland-Slovakia gas pipeline 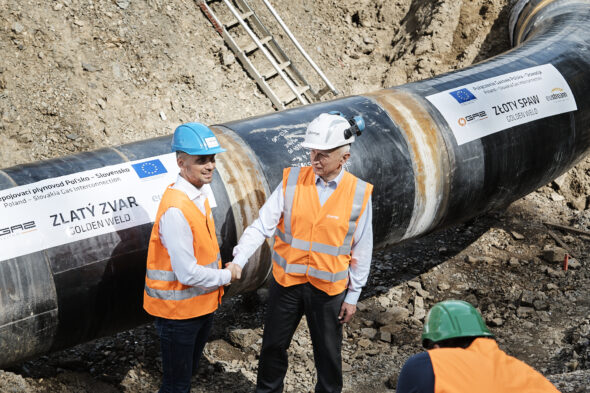 What goes on in Poland on the 4th of August.

Tauron and PGNiG share a letter of intent regarding ECSW

Tauron and PGNiG signed a letter of intent regarding the possible sale of shares in the Stalowa Wola CCGT plant (ECSW) by the Tauron Group to the PGNiG Group. In September last year, the companies launched a 450 MW gas unit in Stalowa Wola. Currently, both companies own 50 percent of ECSW shares each.

“ECSW is a modern gas unit that meets very restrictive environmental standards, the operation of which over the next several years is important for the stabilization of Poland’s energy security. Therefore, for our employees, the possible sale of our shares will have no consequences. PGNiG is a strong, stable and modern company for which modern gas-powered units are important in the context of the growing use of natural gas in Poland,” explained Jerzy Topolski, Vice-President of the Management Board of Tauron Polska Energia. “The purpose of selling shares in ECSW is to organize Tauron’s ownership portfolio, which will allow for the improvement of operational management and optimization of gas fuel use within the Tauron Group,” Vice- President Topolski added.

“Units, such as the one in Stalowa Wola, are the answer to the challenges related to the low-emission transition of the Polish economy, in which PGNiG wants to be an important player, contributing to the construction of a strong Polish multi-energy company. It is also worth underscoring that ECSW contributes significantly to the improvement of air clarity, and thus the quality of life of citizens of Stalowa Wola and the surrounding area,” commented Paweł Majewski, President of the PGNiG Management Board.

The signed letter of intent does not entail any obligation to conclude the transaction. Such a decision will depend on the results of negotiations, and the fulfillment of other conditions specified in legal regulations or corporate documents.

The CCGT unit in Stalowa Wola works in cogeneration, contributing approximately 450 MW to the national energy system, as well as heat supply to the residents of Stalowa Wola and Nisko.

The Polish gas transmission system operator Gaz-System, together with its Slovak counterpart Eustream, made a symbolic “golden weld” on the Polish-Slovak border, where the Poland-Slovakia gas pipeline is being built. The LNG from the terminal in Poland’s Świnoujście and gas from the Baltic Pipe will flow via the new pipe.

“The golden weld will connect the gas transmission systems of Poland and Slovakia. This interconnector, just like the Baltic Pipe installed today at the bottom of the Baltic Sea, will enable the implementation of a bold project. From the Baltic Sea to the mountain peaks, and further to the south of the continent, gas imported from the Norwegian Continental Shelf or LNG from all over the world will be able to flow. Construction in this beautiful and difficult area is a good example that the border on the ridge of the Carpathians is conducive to the cooperation of our nations,” said Minister Piotr Naimski, Government Plenipotentiary for Strategic Energy Infrastructure.

“The connection of the gas systems of Poland and Slovakia will contribute to increasing the regional security of gas supplies and is an important element of cooperation between the two states as part of the Three Seas Initiative. Currently over 90% of the connection is ready. We are planning to complete the investment and launch the gas pipeline in accordance with the dates previously announced on the market, i.e. in the first quarter of 2022,” Tomasz Stępień, President of Gaz-System, said.

Polish Briefing: PGNIG does not rule out acquisitions in the heating sector
Polish Briefing
What goes on in Poland on the 19th of May. Related posts: Polish Briefing: First transmission contract for Baltic Pipe signed. Poland-Ukraine […]
More