Polish Briefing: The government is working on an act that will allow Orlen to take control of Lotos without cash | The Civic Platform is demanding a government position and a committee meeting on the IPCC report 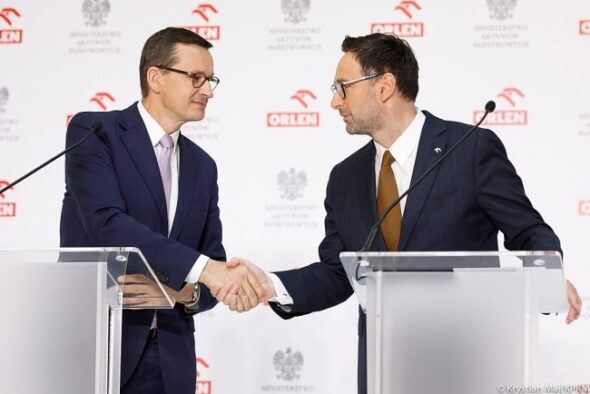 What goes on in Poland on the 17th of August.

On May 13, 2021, PKN Orlen, the Lotos Group, PGNiG and the State Treasury signed a cooperation agreement on PKN Orlen taking control over the Lotos Group and PGNiG. Orlen is hoping the Act on public offering will be updated to change the required threshold for announcing a tender offer by a shareholder from the current 33 and 66 percent to 50. The draft was submitted for public consultations on the 20th of July, and now the Ministry of Finance is analyzing the forwarded comments.

The Act of 29 July 2005 on public offering and the conditions for introducing financial instruments to organized trading and public companies in the field of tender offers needs to be amended. The document is part of the draft Act on amending certain acts in connection with ensuring the development of the financial market and protection of investors on this market. On July 20, 2021, the amendment was submitted for negotiations, public consultations and opinions. Currently, the comments submitted to the draft are analyzed, and then a consultation conference is planned.

Gabriela Lenartowicz and Andrzej Halicki from the Civic Platform opposition party appealed to the Prime Minister of Poland to take a position on the IPCC report on climate change. They are demanding that the government presents its position on this issue, and want a special meeting of the Energy and State Treasury Committee to be held.
“We have a conference in the middle of the hottest summer in recent years. Some say that in the history of measurements there was no such July,” Halicki said. “We have to decide today how to counteract this process. It is not only a national, but a global and European issue. The European Commission is pushing for this policy, and water and forest areas are one of its biggest concerns,” he explained in the context of the biodiversity strategy.

He criticized the government for the Act on deforestation for the Izera electric car factory.

“Please do not be surprised if the next communiqué of the Court of Justice of the European Union concerns, for example, such acts,” Andrzej Halicki assessed.

Polish Briefing: PGNiG launches production at a new field in the Norwegian Sea | […]
Polish Briefing
What goes on in Poland on the 18th of June. Related posts: Polish Briefing: Morawiecki talked with prime ministers of Norway and Denmark about Baltic […]
More