Polish Briefing: The Poland-Lithuania gas pipeline has been officially launched | Gaz-System may accelerate work on FSRU in the Gdańsk Bay 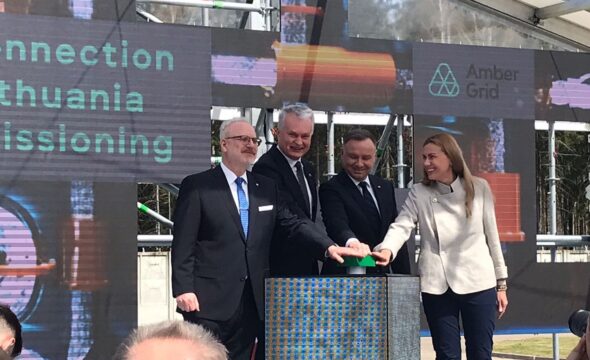 What goes on in Poland on the 6th of May.

The presidents of Poland, Lithuania and Latvia officially opened the Poland-Lithuania gas pipeline

At the Jauniunai gas compressor station in Lithuania, the opening ceremony of the Poland-Lithuania gas pipeline took place, attended by the presidents of Lithuania, Poland and Latvia, Gitanas Nauseda, Andrzej Duda and Egils Levits, the European energy commissioner Kadri Simson, and representatives of Gaz-System and Amber Grid, which implemented the construction of the interconnector.

– The interconnector gives additional connections, thanks to which we can diversify supplies, as well as the directions of their sources. Thanks to this, we strengthen our energy security. Tomorrow, thanks to our terminal, gas will flow to Poland. It is the best and strongest response to Russia’s actions. We are not surprised by the actions of Russia. History repeats itself, said the President of Lithuania, Gitanas Nauseda.

– I want to thank the Presidents and Ministers and all those who have contributed to the connection between the European gas system and the Baltic States. We know that gas has been flowing for several days, and this time the Pole is not wise after the damage, and together with Lithuania and the European Commission we proved to be wise against the damage. A few days ago, the Russians blocked gas supplies to Poland, we had already seen such images at the beginning of the 21st century, and on this basis Poland came to the conclusion that we need to protect ourselves, which was due to the investment in the LNG terminal in Świnoujście. At that time, we started discussing interconnectors. Today, the Poland-Lithuania gas pipeline is a fact at a time when Russia has attempted another gas blackmail. This is a ready answer. In the face of the Russian invasion of Ukraine, there is a need to stop imports of gas and oil from Russia. The vast majority of the European Union is not ready for this, due to the dependence of Europe on Russian supplies over the years, said President of the Republic of Poland Andrzej Duda.

– Today is really a big day. First of all for Poland and Lithuania, but also it is a great day for Latvia, Estonia and Finland. Today we are moving forward and taking a great step towards the full energy independence of our countries. Western Europe has been very naive about trade with Russia for some time. The West has long regarded Russia as a reliable partner, which we can see at the moment is absolutely inappropriate, said Latvian President Egils Levits.

The gas transmission operator Gaz-System is ready to accelerate work on the project of a floating LNG terminal in Gdańsk, provided that strategic decisions are made and certain conditions are met – said Tomasz Stępień, president of the company.

– We presented the government with a plan to accelerate the project, from the end of 2027 to 2025. There is probably a possibility of accelerating it more, but it requires meeting a number of conditions – Stępień told reporters in Jauniunai, Lithuania, during the official opening of the GIPL interconnector.

As Stępień pointed out, at the moment the operator is in talks with the government on the option of a possible acceleration of the project. – Some regulations would be required that could support the investment process and accelerate it. We have indicated those places which, in our opinion, in accordance with EU regulations, we can accelerate, and if there is an appropriate strategic, directional decision, and our conditions are met, we will accelerate, declared the president of Gaz-System.