Polish Briefing: There will be a new tender for the expansion of the compressor station needed for Baltic Pipe 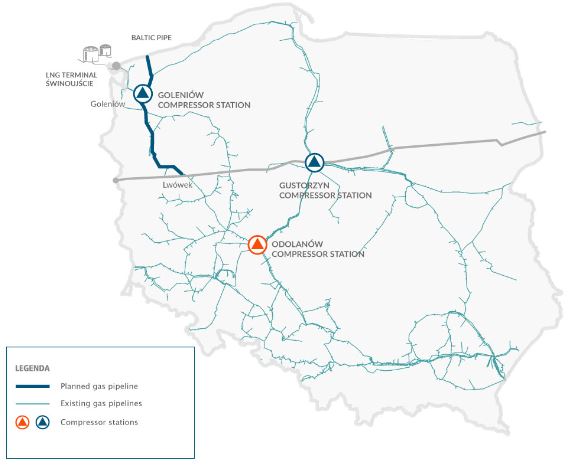 What goes on in Poland on the 17th of November.

Gaz-System informed that the arbitration court at the Polish Chamber of Commerce in Warsaw has annulled the tender for construction works at the Odolanów compressor station won by the consortium of Atrem, JT, PIP Makrum and Projprzem. The Baltic Pipe will need the expansion of this facility, so a new tender will be held.

This is the result of a lawsuit by Control Process, which brought four charges against this consortium: grossly low bid price, lack of experience, reliability and failure to meet the formal requirements of the Terms of Reference.

The court recognized the last of them and, on that basis, canceled the procedure. – Due to the fact that the remaining bids submitted by the bidders in the procedure for selecting the contractor for the Odolanów compressor station significantly exceed the budget allocated to this investment, GAZ-SYSTEM has decided to cancel the procedure in question – we read in the company’s announcement, which announces a new procedure.

The expansion of the Odolanów compressor station is part of preparations for the launch of the Baltic Pipe gas pipeline from Norway. Gaz-System states that it will allow for “increasing the capacity of the transmission system by pumping larger amounts of gas from the Baltic Pipe offshore gas pipeline. It will make it possible to increase Poland’s energy security and will constitute an important element of the North-South Corridor. ” The expansion is to be completed as scheduled in the third quarter of 2022. Baltic Pipe is to be ready by October 2022.

Polish Briefing: Baltic Pipe delay in Denmark and nuclear energy ahead of Three Seas summit
Polish Briefing
What goes on in Poland on the 19th of October. Related posts: Polish Briefing: There is no conflict between Poland and Denmark. The discussion on […]
More