Poncyljusz: The opposition wants to engage in a dialogue on the energy sector, but the government claims it knows best (INTERVIEW) 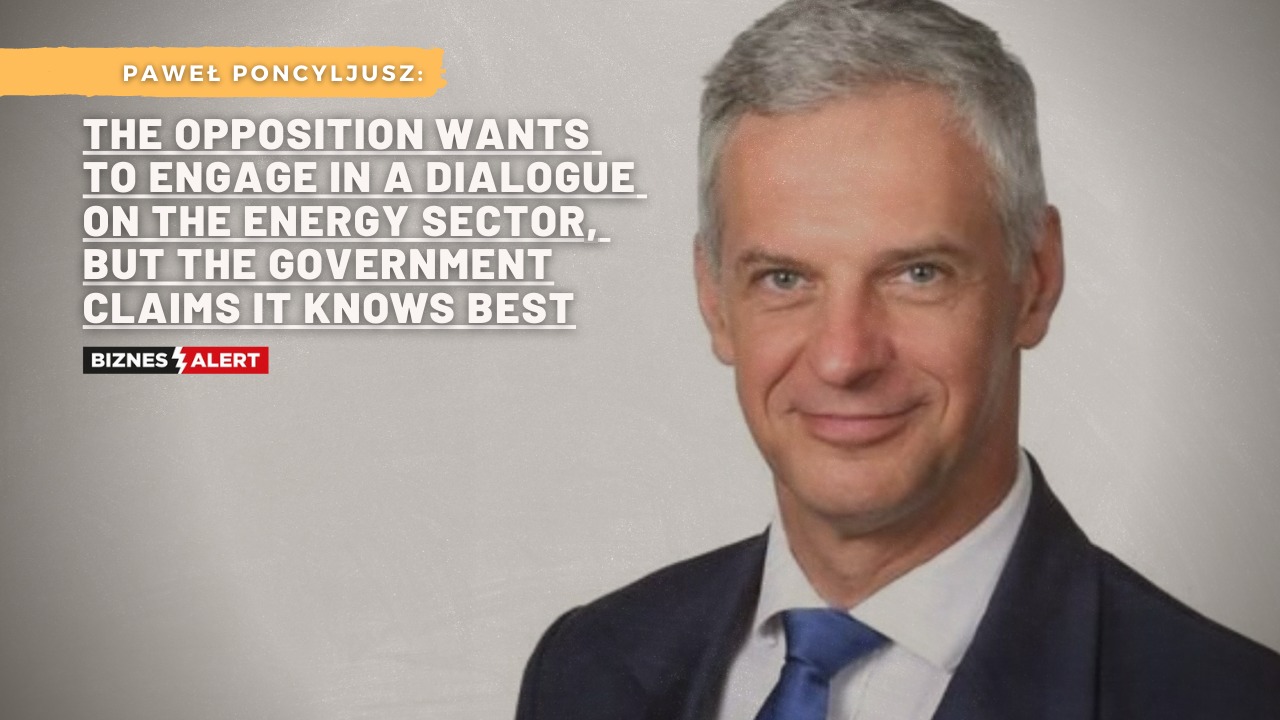 Paweł Poncyljusz, MP from the Civic Coalition, talks about the problems with the public debate on Poland’s energy policy and calls for a real dialogue starting with nuclear energy. “This is about creating a permanent platform for dialogue, perhaps without a big participation from journalists, but as part of a fact-based discussion,” he says. “However, I am a realist and I am afraid that the government will again know best,” he adds.

BiznesAlert.pl: The debate organized by Energetyka 24 with MPs from various parties, including you, was an opportunity to formulate propositions about the need to come up with a cross-party consensus about nuclear power. Is this about supporting the government’s Polish Nuclear Power Programme?

Paweł Poncyljusz: The debate revealed that the entire problem of energy policy with regard to nuclear power goes far beyond one or two terms in office of a given party or coalition. For the program to make sense, all parties on the political scene should feel that it is a long-term engagement that requires consistency. This isn’t a confirmation that everybody supports nuclear power, but a call for starting a joint conversation and for the government to divulge transparent information. We cannot have a situation where a few men in the country take unclear actions with regard to nuclear power, choose partners and contractors without any tender procedure or any other competitive proceedings. And the party in power has the audacity to expect the opposition to endorse these actions with a promise that once the government changes everything will be continued. We all agreed that there is too little transparency. We are now preparing to ask the Prime Minister to set up a meeting on this issue. We want everything that is happening around nuclear power to be transparent, so that we could see the selection process, instead of the government choosing a partner without any verification at all. When it comes to nuclear power, there are examples where partners were selected only for the new government to start everything from scratch. This is a waste of time and money. We have little time or none at all. Even if the nuclear power plant is built, we already have a gap between abandoning coal-fired energy sector and the growing demand for power in Poland. Nuclear power will not entirely solve this problem, but one can and should talk about this in the perspective of the next 15-20 years.

Would the Civic Coalition support the current nuclear program in result of the dialogue? The coalition members themselves are also in discussions on whether and what kind of nuclear power to develop.

When I listen to experts from the energy sector I come to the conclusion that there is space for RES, gas and, to a degree, the recently built coal-fired power plants. We need an honest discussion on this topic. For the past couple of years there has been no dialogue. The best proof of that is the Ostrołęka C power plant. Initially it was supposed to have been a 1000 MW coal-fired plant and a contract on the capacity market, now we are talking about a 300 MW gas-fired power plant, and it turns out that this capacity is enough for north-eastern Poland. It is worth asking why in the beginning we were aiming at such a high capacity, but now it has turned out that just 30 percent of that demand will be enough? First we need to have a completely honest conversation on the numbers and forecasts for energy demand, shutting down coal-fired power plants and limitations on bituminous coal extraction in Poland. We need to confront this data with a map of renewables supply, irregardless of their kind. As the political class we need to take into consideration the entire National Power System. Only after having done that, should we select the appropriate instruments, including nuclear power, but all of this needs to be part of an across-the-aisle dialogue. I would like us to not decide about a specific technology at this stage, which basically means we would have to select a specific provider and contractor. We have to have a conversation about the technologies, locations and the final cost of construction, because individual consumers and businesses will bear the costs. Due to high energy prices, businesses may decide not to locate new factories in Poland and instead choose a place where power is cheaper. It’s not just about Asia or Africa, but about states in the EU as well, as already in some places power prices are more attractive.

Can’t the government and the opposition have a successful negotiation as part of the committee on energy and the state treasury? Is it a problem that MPs from the ruling party chair this body?

I realize that the parliamentary majority has the right to appoint its MPs as chairmen in the majority of committees. Recently we have held a debate about the vote of confidence for Deputy Prime Minister Jacek Sasin. Krzysztof Tchórzewski made a sensible suggestion then, which fell on deaf ears at the parliament, which has been in a stalemate for a year and a half. He said that while we were arguing over minister Sasin, real problems were on the back burner, including Turów and Bełchatów. He called for a wider debate on the energy transition. I talked to him off the record and told him that in this term not once at the committee for energy and state treasury have we talked about the strategic challenges in Poland’s energy sector. We discuss specific bills, but we have never held a meeting where we stopped attacking each other and started talking about the future of the energy industry in Poland. It does not matter who the chairman is going to be. The committee should be a discussion forum for those MPs who have the best knowledge about the energy industry. After the next election either one of us may become responsible for this sector and has to understand the real challenges and hard decisions we are facing. Today the representatives of the ministry come to the Sejm with the conviction that they know everything best, and that the opposition should bow to their infallibility. We need to think broader on the fitness of Polish companies and individual energy consumers. It is worth reminding that the Law and Justice government was saving the mining sector with money from the energy industry, which today does not have funds for investments, and the coal sector only delayed its inevitable shut down. Now it is high time to talk about how the decisions that are made today will impact the future. Today we should together look for constructive solutions for the target energy mix, the capacity market, the characteristics of renewables, role of civic or prosumer energy and how this should be made part of the grid. It is also worth asking whether there is space for gas and nuclear power in the National Power System and what consequences does it bring. I myself am interested in demythologizing nuclear power and finding a truthful answer on when and what goals this power source will serve. Poland will need more capacity than we have today (even if it’s just the declared figure) and we need to discuss how to meet those challenges.

So are we talking about a meeting between the Prime Minister and the committee members?

In past two years Prime Minister Morawiecki invited the representatives of the opposition parties only 3-4 times to join a serious conversation. However, those were individual cases, PR stunts and not a sign of readiness to talk about raison d’etat issues. This letter is a call for a permanent platform for dialogue about Poland’s nuclear energy. The Prime Minister could initiate the talks and then the Ministry of Climate could take it from there. It is important that people from the government responsible for this issue take part in the talks. At the Sejm we often talk to higher ranking officials from ministries who unofficially share the opposition’s propositions, but they don’t call the shots. We want to have a conversation based on a consensus and a shared responsibility for Poland and its power system in the next 10-15 years.

Is the social contract for the mining industry a model for a dialogue in the energy industry?

No. Only the State Assets Ministry and one professional group took part in the negotiations over the deal. We do not know what is included in the application to the European Commission, and the government has already said it will only be revealed after the agreement with Brussels. This is an example of a lack of a cross-party dialogue about an issue that is important for Poland. In such cases it is worth inviting all the political parties to sit at one table to make a decision and then act together. The planned takeover of PGNiG by Orlen is raising concerns among trade unions, and we as the opposition are unable to understand why Orlen’s board wants to disperse the individual companies of the gas company, which is a source of worry for the employees about their future. So far we were talking about merging the PGNiG capital group with Orlen, but now a decision has been made to shut down a few businesses and directly add others to companies with a similar profile. If we knew what the government was really trying to achieve and if we had detailed analyses and calculations, the temperature of the debate could be a lot lower. However, I am a realist and I suspect the government will “know best”. That was the case with the Turów issue. The government claimed it had everything under control, but now this has turned into an emergency. Today nobody from the government wants to admit that it was the opposition that was in the right about the risks posed by the complaint the Czechs submitted last February.

Sang Don Kim: Korean nuclear offer for Poland has an competitive advantage over the […]
Energy Nuclear
I believe that most important factors that determines the success of nuclear power plant construction are the type of reactor that guarantees robust […]
More