PSEW/IJ: Liberalization of the Distance act may add billions to Poland’s economy 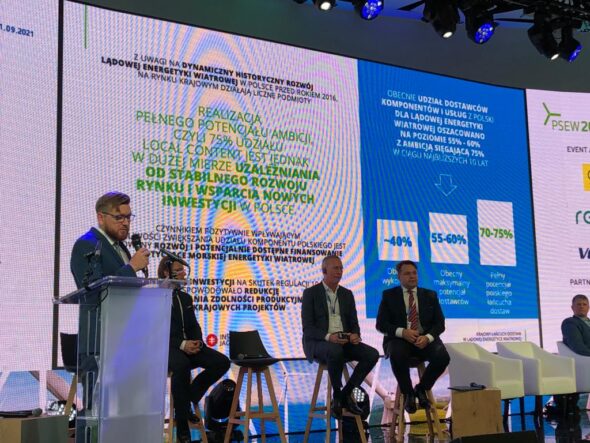 New onshore wind farms will create opportunities to increase GDP and create new jobs – this is the initial conclusion of the analysis drafted by the Polish Wind Energy Association (PSEW) and the Jagiellonian Institute. The report deals with the ability of Polish companies to participate in the supply chain for onshore wind power. However, for this to happen the Distance act has to be liberalized.

According to the analysis, whose initial findings have been presented during the recent press conference on wind power in Serock, the resulting cumulated GDP increase by 2030 (depending of the scenario) may reach between PLN 70 and 133 billion. This could provide between 51 an 97 thousand new jobs. Thanks to the property tax alone, local governments might be able to cash in between PLN 490 and 935 million. The authors of the report, which is still in the making, claim that these figures are achievable, provided that the new onshore wind capacity in Poland will reach between 8.9 and 11 GW. Currently the participation of the providers of components and services from Poland for onshore wind power has been estimated at 55-60 percent, but the target for the next decade is to reach an ambitious 75 percent. To compare, the current participation of the domestic supply chain is at 40 percent.

“Fulfilling the ambition of a participation of the local content at 75 percent hinges, however, to a large degree on the stable growth of the market and on the support for new investments in Poland. The factor that will positively impact the possibility of increasing the participation of Polish content is the planned development and potentially available financing of onshroe wind power. A drop in investments resulting from the 10H regulation has caused a reduction in the ability to use production capabilities for national projects,” the initial conclusions of the report compiled by the Jagielloński Institute and PSEW said.

In 2016 the government introduced the so-called Proximity act (aka Distance act – ed.) that regulates onshore wind investments. The law banned the construction of new onshore wind turbines at a distance that is shorter than 10 times the height of the turbine, blades included, from residential buildings and mixed development. It is worth reminding that at the end of July PSEW and the Jagiellonian Institute presented the conclusions from their report on the participation of local content for offshore wind power.

Kamila Tarnacka, the Vice President of the Association has referred to that analysis during the latest conference. She stressed that the potential of local content when it comes to offshore projects in Poland was at 20-25 percent at this point. This level of ambition refers to the first round of the offshore projects that will add 5.9 GW to the Polish grid. When it comes to the other projects, that will commence in 5-7 years, that target has been set at 45-50 percent.

Tarnacka also reminded that by 2050 the offshore capacity in Poland may reach 28-45 GW.

There are two resolutions about the installation port. Neither is in force
Energy Renewables
The Polish Wind Energy Association, the Polish Offshore Wind Energy Society and the Jagiellonian Institute have prepared analyses and scenarios on […]
More