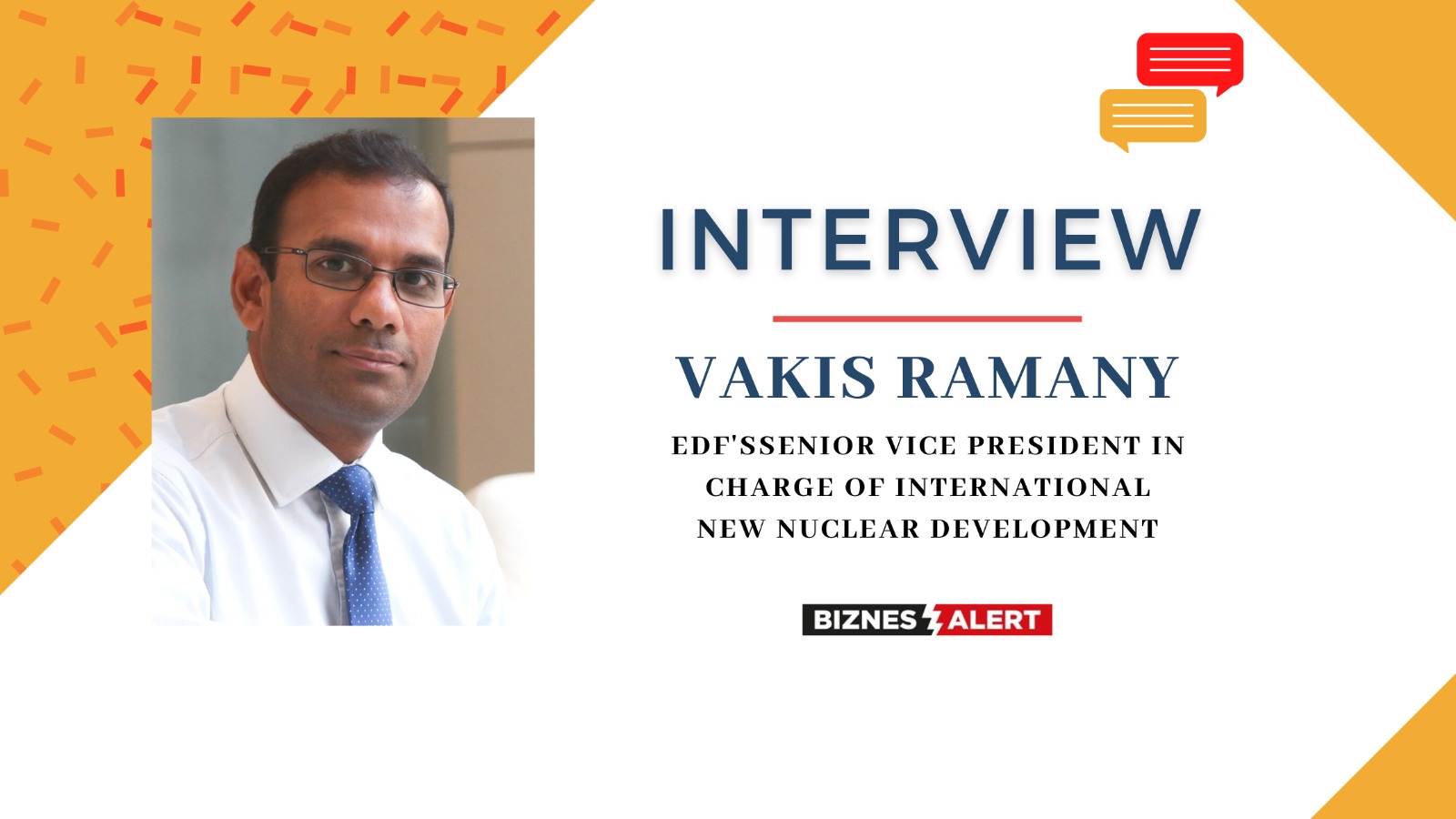 The Polish industry is mature and experienced in the nuclear field. More than 35 Polish companies have already been working on EPR projects. EDF would be able to bring the support of French export credit agency BPI France and of the public refinancing bank SFIL, thus allowing the coverage of potentially more than two-thirds of the financing needs – says Vakis Ramany, EDF’s Senior Vice president in charge of international new nuclear development, in an interview with Biznesalert.pl.

BiznesAlert.pl: What could be the role of the nuclear in EU climate policy under the European Green Deal?

Vakis Ramany: The European Union recently adopted a target of carbon neutrality by 2050. To this end, it is now widely acknowledged that this will require extensive low carbon electrification of the economy and, at the same time, a reduction of “at least 55%” by 2030 in greenhouse gas emissions as a first step.

At the international level, the value and necessity of nuclear energy is already recognized by numerous institutions, such as the Intergovernmental Panel on Climate Change, the International Energy Agency or the World Energy Council, stating that an average rate of 15GW per year of additional nuclear capacity will need to be brought online between now and 2040 in order to meet the objective of Sustainable Development Scenarios.

In parallel to investments in renewables and new forms of energy storage as essential drivers, there is a growing conviction that nuclear, which does not release CO2, is paramount to achieve decarbonization of electricity generation at an affordable price. “The European strategic long-term vision for a prosperous, modern, competitive and climate neutral economy” published in 2018 also recognizes that renewables and nuclear will be the two cornerstones of the European decarbonized electric system in 2050. More and more European countries see nuclear as an effective means of meeting their climate goals while securing their energy supply in the long run. The UK engaged in this strategy a decade ago and now its nuclear program is in full swing. We are convinced that the Polish nuclear program will follow suit, paving the way for other countries.

Indeed, nuclear offers the big advantage of a baseload power source which is dispatchable at all times, in large quantities, therefore satisfying the indispensable security of supply that our economies and our fellow citizens request, bringing the right complementarity to other intermittent sources such as solar or wind power.

We expect that the potential of nuclear to decarbonize the European economy will eventually be acknowledged and incorporated into the European green taxonomy for sustainable finance which would widen financing options for new nuclear projects.

Is EDF able to provide technologies and also to participate in costs?

EDF offers the EPR technology, a 1650 MWe reactor, which has demonstrated its robustness and outstanding performance in Taishan, China, where we have built two such reactors. The EPR would be the right choice for Poland, both technologically and economically

EDF’s proposal for Poland is a comprehensive and fully integrated offer based on a proven technology and on EDF’s outstanding experience in design, engineering, construction, commissioning and operation of nuclear plants worldwide. We offer an All-in-One European solution. One company, one partner, one technology.

No one else can offer this level of experience, long-term support, cultural and geographic proximity: EDF is a European partner able to deliver a European Project leveraging the strengths of the Polish industry, already familiar with the European norms on which our nuclear codes are based.

Thanks to the EPR, Poland will be able to produce more power and meet its installed capacity goals earlier: for the same 6 GWe nuclear program, compared to 6 medium size reactors (1100MWe), the choice of 4 EPRs would generate an extra 48 TWh during the total period of construction, as 4 EPRs will take less time to build. In terms of value, this additional production could represent about 2.4 billion Euros of additional early revenues.

On the financing aspect, the French team will put on the table all its expertise in designing tailor-made financing schemes for export projects. More specifically, EDF would be able to bring the support of French export credit agency BPI France and of the public refinancing bank SFIL, thus allowing the coverage of potentially more than two-thirds of the financing needs.

EDF will continue to explain in detail all those elements to the Polish administration.

What can the involvement of domestic suppliers from Poland be like?

Our European supply chain, experienced with the EPR technology, will partner with Poland’s industry to support a robust localization strategy.

The Polish industry is mature and experienced in the nuclear field. More than 35 Polish companies have already been working on EPR projects.

Since 2010, we have been working in Poland to identify, evaluate and pre-qualify potential future partners and suppliers. Close to 350 businesses have been screened to date, and roughly 20% of them have been pre-qualified. We have also organized 7 supplier days in the main industrials areas of the country as well as a series of 6 seminars dedicated to codes and standards. Industrial localization is a very serious matter which needs to be anticipated.

EDF has a strong expertise and experience in this approach, as demonstrated in China or South Africa, and we are currently implementing it at Hinkley Point C in the UK, where we are building 2 EPRs. 64% of the Hinkley Point C related investments do benefit UK companies. £1.7bn worth of contract have already been spent with UK businesses. 10,000 jobs have already been created and more are expected to be as the UK government is considering additional EPRs.

In Poland too, we will rely upon the Polish nuclear industry. Given our early assessment of the Polish industry, localization opportunities will be plenty, benefitting the project and the Polish economy.

The EDF offer in terms of localization is solid and credible, based on facts and experience. The emergence of competitive Polish suppliers is also an opportunity for other EPR projects in Europe, creating a real synergy potential with a European fleet of EPR reactors.

Will the problems with the construction of a nuclear power plant in France (Flamanville) and Finland affect the costs of new, planned nuclear reactors?

The experience we gained from other EPR projects worldwide is the best guarantee of cost efficiency and competitiveness of our future projects.

I can ascertain that a polish nuclear project with EDF as partner will incorporate all the lessons learnt from our 5 EPR projects as well as from on our 50-year long experience in operating safely nuclear power plants.

As for Flamanville 3, it is important to consider it from a different perspective. Flamanville 3 was the beginning of EDF’s journey with the EPR technology. The project was decided in the early 2000s and has allowed a wealth of valuable learnings ever since. A few years after we launched Flamanville 3, our Chinese partners, with whom we have been working for decades, called upon us to build 2 EPRs in Taishan, China. All the lessons learned from Flamanville 3 have been fed into Taishan and allowed Taishan to be up and running even before Flamanville 3, with a very high performance.

Back in 2012, we obtained the certification for the EPR from the British Safety Authority, which allowed us to initiate the construction of 2 EPRs in the UK four years later. The learnings from Flamanville 3, Taishan, and Olkiluoto brought tremendous operational efficiencies and productivity gains. For example, the installation time of Unit 2 cooling system components was reduced by 50% with respect to Unit 1, from 12 to 6 weeks. As a result, the project has been able to meet so far all its key milestones on schedule.

So EDF believes in the EPR technology and plans to implement it for future projects in France and the UK, building on the strength of a European supply chain now experienced with EPR construction in Europe.

Is EDF interested in nuclear development also in Romania or Bulgaria?

Being the reference nuclear vendor and operator in Europe, EDF is closely following all nuclear initiatives on our continent and EDF is ready to offer its expertise. That being said, the two countries you mention present very different situations and need to be addressed specifically.

For any New Build project in Europe, EDF is interested in discussing with the political representatives and the operators to understand their expectations. We are deeply convinced that having a large fleet of EPRs in Europe would make sense and bring many benefits to all countries involved.