Russia is stealthily preparing for an offensive 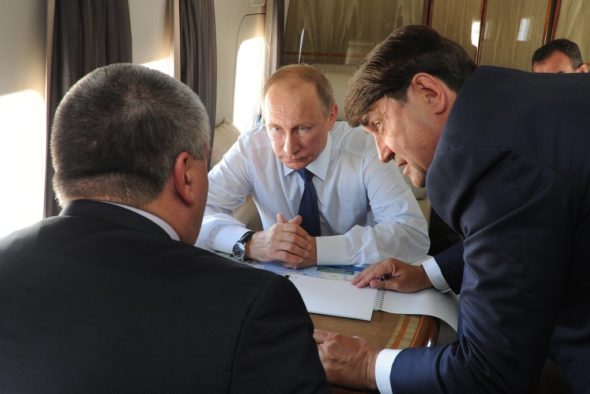 Putin is unabashedly stirring up tensions in Europe to hide the real goal that has been guiding him for years – the resuscitation of the Soviet Union in a new edition. In the face of internal problems, plummeting approval ratings and sinking public trust, the Kremlin needs a success. Belarus has already fallen into this trap, now it’s time for Ukraine – writes Mariusz Marszałkowski, editor at BiznesAlert.pl.

Ukraine has been struggling for months with unprecedented pressure from Russia. On the one hand, through the accumulation of troops, Russia is putting pressure on Ukraine in a military sense, on the other it has been exerting unrelenting economic stress as well. In his recent article, Dariusz Materniak has explained the military aspect of this problem. The Russians are trying to achieve many goals simultaneously, both at the level of bilateral relations between Russia and Ukraine, and, e.g., the United States, but also on a multilateral level, e.g., as part of the Normandy Format.

The current tensions in Europe, whether related to the wave of migration, the energy crisis, or the military hostility, need to be analysed in a broader perspective. These are not independent actions, but a coordinated operation with one main objective. Russia has long been trying to lay the groundwork to replace the government in Kiev with one that will pursue a policy consistent with the Kremlin. So far, this has not worked at any level, as efforts to undermine the government in the democratic process by, e.g. promising lower gas prices during elections, have failed, and so has the military pressure. Now we are witnessing a concerted effort aimed at changing the government in Kiev or, in the minimum variant, the main accents of the internal and external policies of the current Ukrainian administration.

Currently, the range of tools at Moscow’s disposal is the biggest since 2014. In addition to the already constant military pressure, there is now an energy aspect as well as a humanitarian one.

The migration crisis that is affecting Poland and the Baltic states is not Lukashenko’s plot, and contrary to what we see on the surface, it is not Poland and the Baltic states that are the main target. Considering Russia’s actions in the past years, and the refugee crisis of 2015-2016, it is possible to infer with a high degree of probability that Russia’s overriding goal is to open a “second front” that would distract the attention of the West from the Ukrainian crisis. Moscow is aware that a West mired in a migration crisis, when the media and politicians would be focused on the wave of refugees similar to the one in 2015, would be much less responsive to a possible armed conflict initiated by Russia. This is what happened in 2015, when Russia was preparing to enter Syria by force. The West, busy dealing with thousands of migrants, did not notice the growing Russian military presence in the country.

Russia is trying to destabilize the situation across Europe by fueling negative sentiments related either to the wave of migrants or to the issue of pandemic restrictions. The governments of countries where societies are polarised and preoccupied with issues that directly affect them may be less determined to follow and engage in issues that affect, or may affect, Ukraine.

Energy as the key to discontent

However, the migration crisis and covid-19 are not the only tools that the Russians use in the fight against Ukraine. Energy is another power weapon that they have reached for. A closer look at what Russians are doing reveals that their policy regarding gas supplies to Europe, may have a different purpose than we see on the surface. It would seem that reducing the gas transit through the territory of Ukraine and Poland is aimed at forcing Europe to quickly launch Nord Stream 2, which, so far, has been blocked by EU regulations, specifically the Gas Directive. This, of course, may well be on the table, but when one considers Russia’s foreign policy in strategic terms, the end goal seems to be different. The true motive is to spark protests and the outbreak of anti-government “Maidan” in Ukraine. This anti-government Maidan can then be used as a casus belli to legitimize the entry of Russian troops into Ukraine.

This is how this strategy would unfold: For several months, the Russians are not transferring the agreed volumes through the territory of Ukraine to the west of Europe. In addition, they do not replenish their gas storage located in, among others, Germany, Austria and the Netherlands. This causes the price of gas on the European markets to rise consistently for several months, reaching historical records. This, of course, affects all participants of the gas market, but Ukraine may be one of the more impacted countries. Despite the relatively large domestic gas production, ca. 17 billion cubic meters per year, Ukraine must import annually about 10 billion cubic meters of gas. Since 2015, Ukraine has not been purchasing gas directly from Gazprom, and instead buys gas in the West, based on prices on the German stock exchange. At the moment, high prices are hitting mainly Ukraine’s Naftogaz, which, unlike other gas operators in Europe, does not base its purchases on long-term contracts.

Consequently, today this company is one of those that are most exposed to high gas prices. Moreover, due to the requirements of international financial institutions, including the International Monetary Fund and the World Bank that are expecting the liberalization of further branches of the Ukrainian economy, including the energy sector, these prices may affect the Ukrainian society. Another issue that Russians have taken advantage of, is thermal coal. Most of the coal mines in Ukraine remained in the territory of the pro-Russian occupied Donbas. As a result, a large chunk of Ukrainian coal-fired power plants have to rely on imported coal.

So far, Russia has been the logical source of those imports. However, in late October, Moscow decided to impose an embargo on the supply of coal to Ukraine. The coal imported from Russia was used as fuel in several Ukrainian power plants, mainly those located in the east of the country. Due to the lack of sufficient fuel to ensure the constant operation of power plants, the Ukrainian concern Ukrenergo has reported that the amount of its stored coal is 2.5 less than what is needed to ensure the operation of all of the 23 power units that it owns. Currently, according to data from November 21, only 3 units of the CHP are working. The remaining 20 are on standby due to lack of coal. At this point the situation has been saved thanks to additional nuclear power units and private heating plants owned by Renat Akhmetov, but things can take a tragic turn when the frosts come.

The situation of Centenergo is all the more difficult, as the concern ordered 700 thousand tons of coal from Kazakhstan. However, the cargo will not reach Ukraine, because… Russia blocked its transport via its territory. Russia has stopped the railroad cars with coal to Ukraine, claiming its railway grid is under too much strain already. This means the coal destined for Ukraine may not leave Kazakhstan. This is a big blow to Kiev, because Kazakh coal has not only the lowest price, but is also one of the most suitable for combustion at Ukrainian power plants. For this reason, the Ukrainians decided to purchase additional coal from Poland, the USA and Colombia. In addition, the Ukrainians were forced to purchase electricity from Belarus. Given the political realities and the fact that Ukraine has joined western sanctions against its northern neighbor, the current energy situation on the Dnieper is particularly dangerous.

The Russians are striking Ukraine not only by reducing or even halting the supply of coal, but also by imposing embargoes, for example, on fuel and electricity. This has forced Ukraine to restrict the sale of certain types of fuel at gas stations.

How will the West react?

All these steps, combined with the actions in other areas and media and information offensives, are expected to increase discontent and frustration among the Ukrainian public. The blame for the poor preparation of the state for the crisis should be borne by politicians and president Volodymyr Zelensky himself. The Russians hope that public anger will be so great, that the Ukrainians themselves will decide to overthrow the current government. Then the Russians, under the pretext of protecting their minority, may want to enter Ukraine by force, as they did in 2014. Before the invasion, Russia may use provocations and diversion, aimed at manufacturing grounds for an offensive.

By raising tensions, the Kremlin is also monitoring the reaction of the West, mainly the United States. So far, given that a similar flare-up of the military situation also took place in the spring of this year, the West is not acting the way it should. Putin is using the weakness of western leaders to up the ante. Only a strong and decisive response from the United States, Britain, Germany or France can stop Russia. We’ll soon find out if the leaders of these countries up to the task.

Pieńkowski: Russia took the opportunity to put pressure on Moldova (INTERVIEW)
GAS SECURITY
The primary goal of Russia and Gazprom is to lay the groundwork for the launch of the Nord Stream 2 gas pipeline. The gas conflict with Moldova could […]
More