Russia is wagging its nuclear finger because it can (ANALYSIS) 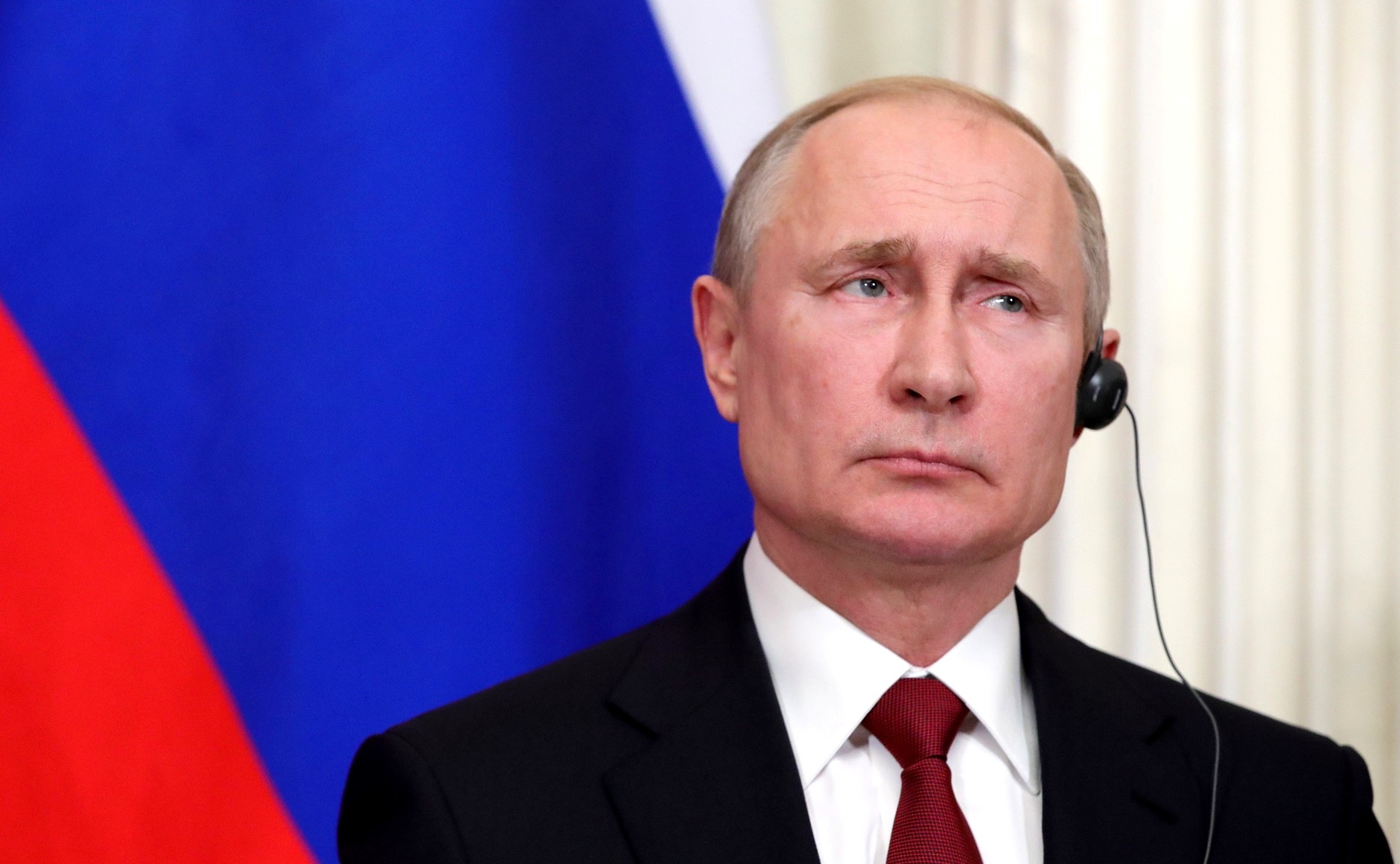 Despite Russia threatening a nuclear attack against Ukraine and using the Zaporozhye nuclear power plant as a hostage, the West is not ready for nuclear sanctions against Rosatom due to another chain of dependence, from which it now has to free itself – writes Wojciech Jakóbik, editor-in-chief at BiznesAlert.pl.

Russia is threatening Ukraine with a tactical nuclear attack after it annexed the occupied territories around Donetsk, Luhansk, Zaporozhye and Kherson on the basis of its sham referendum. Its military doctrine allows for the possibility of using such weapons in defense of its territory, which now includes the lands stolen from Ukraine, lands that are being gradually recaptured as the Ukrainian counteroffensive progresses.

The Russians continue to carry out provocations at the Zaporozhye Nuclear Power Plant, which is under the control of their armed forces, but Euratom staff is working on site. The decree of President Vladimir Putin is supposed to transfer the plant under the control of Rosatom, while a military solution would create a risk of an incident at the Zaporozhye NPP, due to a human error or another provocation involving the Russians. The contamination would be local in nature, but it would also destabilize the European market and cut off the chances of energy trade with Ukraine, which Poland is counting on, because Zaporozhye was the largest power plant stabilizing the Ukrainian transmission system. These facts would force the West to introduce further sanctions against Russia, for example, in the nuclear sector – against Rosatom and TVEL, which are engaged in nuclear projects in Europe and supply them with fuel. However, the West is not taking this step. The draft of EU’s eight sanctions package against Moscow does not include a word about the Russian atom. This is because dependence on Russian nuclear fuel is another historical event that gives leverage to the Russians, similarly to what has happened in the gas, oil and coal sectors.

This was one of the topics of the Warsaw Security Forum 2022, during which I had the pleasure of leading a panel on the strategic autonomy of nuclear energy in the face of dependence on fuel supplies. Canada’s Special Envoy to the European Union and Europe, Stephane Dion, represented a major nuclear fuel producer at the event. He said Canada could increase shipments to Europe, but not overnight. In the near future, cooperation between Poland and Canada on nuclear fuel may be strengthened. “Canada and Poland led the resolution on the need to ensure security at Zaporozhye. We must ensure that the war does not lead to a nuclear catastrophe,” Dion told me at WSF 2022.

It is worth recalling that it was on their initiative that the IAEA dealt with the incidents at Zaporozhye. Another participant of the discussion – Aleksandra Kaźmierczak, Director General of the Euratom Supply Agency argued that we needed up to seven years to become independent of Russian supplies. “Security of supply must be ensured at every stage of the fuel cycle: from extraction, processing, through enrichment and production. It is extremely important that all actors in the common nuclear market adapt to the situation and prepare for the risks based on a sober assessment of the situation through diversification of supply sources,” Kaźmierczak wrote in a report summarizing the year 2021, published in August 2022. This diversification did not occur because Russian fuel was cheap and easily available, and the development of our own supply chain was economically unprofitable. The West fell into the same trap as in the gas or coal sector.

Euratom is a treaty-based agency that includes the same countries as the EU, and is supervised by the European Commission. It guards the security of supply by acting as an intermediary in purchases of nuclear fuel. For years it has been providing reports to Brussels where it has been warning of the growing dependency on Russian fuel. According to the agency, the European Union has different sources of supply, but some market players get nuclear fuel from one source, and some remain dependent on the WWER technology from Russia. WWER reactors are spread across NATO’s eastern flank: in Finland and the Visegrad Group countries. The American Westinghouse has made efforts to replace Russian fuel with its own in Ukraine and the Czech Republic, but Hungary’s reliance on Russia to expand the Paks Nuclear Power Plant is alarming, especially in the face of that country’s pro-Russian policy that is tearing apart European unity. The production of nuclear fuel for the WWER creates dependence on Russia, which, in order to maintain it, has made various efforts to block supplies from alternative sources. For example, the cartridges in which fuel rods are inserted were designed by the Russians so as to make it difficult to change suppliers. They have the shape of honeycombs, while others are rectangular.

“The Russian invasion of Ukraine has created a new context for the security of nuclear supplies to the European Union. The agency has made a number of recommendations to address this vulnerability. It recommends reviewing the risk assessment, inter alia in the areas of transport and storage, the establishment of preparatory plans and the long-term diversification of contracts and the storage of strategic stocks. It also encourages industrial investment,” reads the report published in the summer of 2022, which repeats Euratom’s recommendations that have been out there for years. “The fuel cycle in the European Union and beyond remains dependent on Russia. There is plenty of uranium that can be mined outside of Russia. Russia provides 25% of the uranium needed for Euratom. We started talking about restarting mines in Canada. It’s not a real bottleneck. It’s further away. In order to produce nuclear fuel, uranium must be processed and enriched,” Kaźmierczak reminded at the WSF 2022. “25 percent of uranium for the needs of the Union is processed in Russia. Looking ahead, it doesn’t seem like much, but if we were to replace Russian, and perhaps Chinese, uranium processing, we would need at least seven years of investments, because there is no potential in the West. Since the 1990s, the Russians have been involved in dumping their product on this market. It made no sense to invest in uranium processing in Europe or the US. Only now is this potential going back to its former level in the States. This was a deliberate hybrid attack to ensure that the Russians maintain their market share in this area,” Kaźmierczak said in Warsaw, referring to Euratom’s many warnings in the past. “Sanctions on Rosatom with immediate effect would significantly weaken the security of nuclear energy supplies. This is a challenge from the point of view of the geopolitical winter ahead, as well as the next one. We need to build a strong supply from alternative sources that will fully replace the Russian source. We have to do it in stages, otherwise we will cause another crisis,” Kaźmierczak summed up. 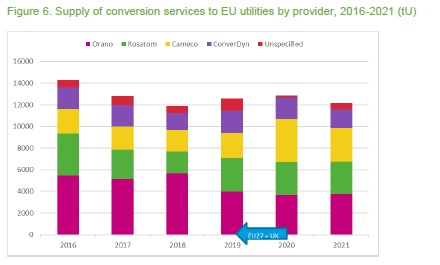 Security of supply of nuclear fuel to Europe

Interestingly, one of the potential partners of the nuclear program in Poland argues that the production of nuclear fuel could take place on our territory. We are talking about the Koreans from the KHNP, who claim that the Korean KEPCO could transfer the technology of nuclear fuel production to Poland, as our journalist was informed by the vice-president of this company during a study visit to Korea. Westinghouse says it would provide fuel from a plant in Sweden that will also supply the reactors planned in Ukraine and the Czech Republic. Westinghouse and France’s EDF (another potential partner) are also working together to provide EnCore Fuel in French reactors after 2030. Poland is due to choose a nuclear partner in October, and according to unofficial information, this could happen in days. The Polish Nuclear Power Program, which at this point promises 6-9 GW of nuclear power by 2043, could contribute to the construction of strategic autonomy of the West in the field of security of nuclear fuel supplies. For now, however, the Russians may use their fuel dependence as another bogeyman in the face of the invasion of Ukraine.