Russians have called out Poland and Germany for the reverse on Jamal, because they want to continue upping the prices 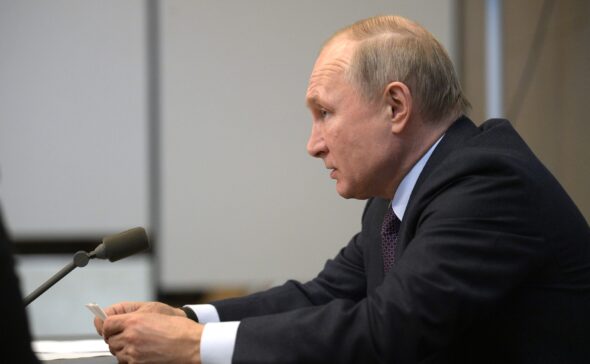 According to the Russians, the use of the reverse flow on the Yamal gas pipeline in Poland by the Germans is unreasonable. They are joined in criticism by Yulia Tymoshenko accusing Ukraine of paying extra to European intermediaries. In reality, however, it is a routine element of the EU gas market and a prelude to the polonisation of Yamal’s capacity. Meanwhile, the Russians can continue fuelling uncertainty, which will further increase natural gas prices that are already record-high.

The Russians accuse Germans of “unreasonable sale of gas” to Poland via the reverse flow on the Yamal gas pipeline. Russian President Vladimir Putin has suggested that this gas goes to Ukraine, and Yulia Tymoshenko, dubbed “the gas princess”, has accused Kyiv of overpaying for Russian gas coming from Europe. It is worth recalling that before the crisis, gas contracts with the Russians were more expensive than the offer on the European stock exchange.

“This (resold-ed.) gas comes from underground storage in Germany, which has already been used at 47 percent. And the winter is just beginning … this is not the most rational decision,” said Gazprom spokesman Sergei Kuprianov. This was his way of commenting on a routine purchase of gas on the German exchange by Poland’s  PGNiG and other entities, possible thanks to free access to the capacity of the Yamal gas pipeline after the end of the transmission contract with Gazprom and the introduction of EU regulations for the Polish section of the pipeline. PGNiG and other customers can use Yamal’s spare capacity through an auction to bring gas from the west, which constituted up to a quarter of deliveries to Poland in 2020.

Ultimately, the operator of the gas transmission pipelines Gaz-System wants to make the Polish section of the Yamal a normal part of the transmission system allowing gas to be distributed in different directions, including LNG and deliveries from the Baltic Pipe to the east. However, the Russians have suggested problems were coming.

“There is a reversal of gas flow from Germany to Poland and reportedly also to Ukraine, of the order of 3 million to 5 million cubic meters a day,” said the spokesman for Gazprom in a video that was posted on the internet. “This gas comes from underground storage in Germany, which have already been used at 47 percent. And winter is just beginning … this is not the most rational decision, ” Kuprianov added, quoted by the Polish News Agency. According to him, the prices of these supplies are “significantly higher than the volumes supplied by Gazprom”.

The Russians suggest that such a solution is unreasonable and argue for long-term contracts with Gazprom. However, these were on average several percent more expensive compared to the price on the European stock market in the period preceding the price records resulting from the energy crisis.

Yulia Tymoshenko, who was accused by her critics of signing an unfavorable long-term contract Naftogaz-Gazprom, expressed a similar view. Ukrainians have not imported gas directly from Gazprom since 2015, and instead import it through the European Union, including Poland. Tymoshenko has calculated that European brokers earn from USD 70 to 100 per 1000 cubic meters on such deliveries, and has accused the government in Kyiv of deceiving the public. The topic was also raised in Vladimir Putin’s end-of-year-speech, where he suggested that the gas from Yamal eventually lands by the Dnieper. PGNiG exports to Ukraine about a billion cubic meters of gas a year. Even dedicated shipments of American LNG from Świnoujście have made it there. It is possible that these deliveries will only increase in volume as part of the Poland-Ukraine-USA deal, we wrote about this on BiznesAlert.pl.

“This narrative has been manipulated. Since the Russians do not want to use the Yamal, the Poles can use it for reverse deliveries to the east,” BiznesAlert.pl’s sources in the gas sector argued. “Such suggestions are intended to add to the uncertainty in the market, which is driving up gas prices in Europe,” the informant adds.

Gazprom may have warned its German partners about the gas price crisis, which it is using […]
Alerts GAS Nord Stream 2
The French opinion portal Opinion Internationale has published an extensive analysis on Gazprom restricting gas supply to Europe to force the launch […]
More