Sasin: The American investment in small reactors for KGHM is potentially the biggest of this kind in the world (INTERVIEW) 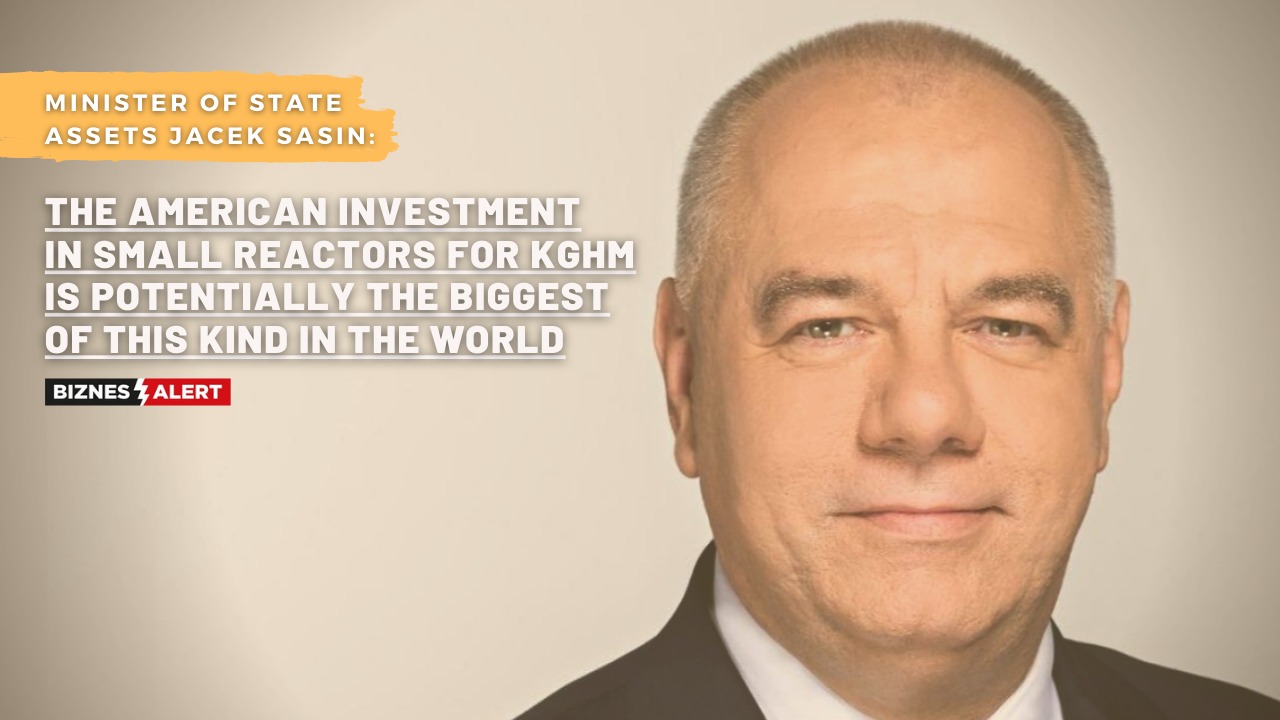 Poland’s KGHM and America’s NuScale Power are to sign an important agreement. “As part of the cooperation the plan is to design and build four small modular reactors – SMRs, with an option to expand to 12, with installed capacity of about 1 GW. This is potentially the largest investment of this type in the world,” said Jacek Sasin, Minister of State Assets in an interview with BiznesAlert.pl.

BiznesAlert.pl: What role SMRs could play in Poland’s energy policy?

Jacek Sasin: It is clear that Poland needs modern energy sources. We are in the process of transforming our power industry, which today depends on coal at approximately 70 percent. It is clear that the development of nuclear energy will be crucial here. This is particularly important in the context of Gazprom’s current activities and the situation on the gas market. It is clear that the prices of this raw material may also be unstable in the future. Gas is a raw material, whose share in the cost of energy production is very large, in case of the atom this problem does not exist. So the atom has a definite advantage over gas. After all, the Polish Energy Policy until 2040 is not the only document that talks about nuclear power.

Of course, the construction of large-scale nuclear power units is a priority for the implementation of the Polish Nuclear Power Programme. The so-called large reactors that generate clean energy from the atom will replace decommissioned coal blocks. However, there is no doubt that there is also room for both small and micro nuclear reactors in Poland. Small reactors are no competition for the so-called large atom, and can be an excellent supplement and source of clean energy for the industry, which in many cases needs it in huge quantities.

What is the plan to use SMR know-how in the Polish economy?

The SMR technology is something of a novelty and will only develop on a larger scale. The benefits for the economy as a whole can be manifold. It is certainly known that it will help to protect the environment and significantly reduce the cost of doing business. The SMR technology is also a more stable alternative to conventional energy sources than RES. That is why many companies are looking in this direction, including the largest state-owned companies such as Orlen and KGHM. We stand here among the world’s largest companies. It is clear that access to a technology that is yet to be developed has many benefits for the entire economy. As part of the development of the Polish nuclear power industry, the government is not considering the construction of small modular reactors. However, we are open to cooperation between Polish companies and world leaders in the field of SMR technology. Polish companies want access to emission-free energy at a competitive cost. In September last year, KGHM has already signed an agreement with the American company NuScale Power on the construction of at least four nuclear reactors in this technology. Orlen is also taking action in this regard. The agreement signed by KGHM concerns the development of nuclear technology in the form of repowering, i.e. replacing older power plants with new ones. It is worth noting that the company assumes that the first of the reactors will start operating in 2029. So this is very specific.

You’re going on a visit to the United States. Will small reactors also be discussed? What forms of cooperation with the US will be established?

Indeed, on Monday I will begin a visit to the USA. Due to some limitations, I cannot go into details yet, but it is no secret that small nuclear reactors will be one of the topics. But not the only one. We will also discuss other issues related to economic cooperation. This is the first visit of a representative of the Polish government to Washington at such a high level in many months. I will be meeting with US Energy Secretary Jennifer M. Granholm and International Monetary Fund managing director Kristalina Georgieva. I am talking about this in order to manifest that it is very important for the government to make Polish-American relations strong and to develop them in various areas. Economic relations and investments are the key link between our countries.

What US companies are ready to invest in SMRs in Poland and what is the time horizon?

Very specific-the breakthrough of 2029 and 2030. KGHM and NuScale Power, the American leader among SMR reactor manufacturers, have signed a joint commitment to develop SMR technology in Poland. The energy would be transmitted to the copper company’s production facilities. As part of the cooperation the plan is to design and build four small modular reactors – SMRs, with an option to expand to 12, with installed capacity of about 1 GW. This is potentially the largest investment of this kind in the world. NuScale Power is in the process of developing a modular nuclear power plant with a light water reactor.

In undertaking this investment, KGHM obviously has in mind mainly the provision of a stable source of energy for its needs. Copper mining is an extremely energy intensive business and KGHM is the second largest energy customer in Poland. However, it is not off the table that this investment will also allow for commercial energy production to support the green transformation of Poland and reduce costs for consumers.

I am convinced that my visit to the USA will bring tangible results.