Sechin vs. Miller – a turf war. Will Nord Stream 2 cause a new controversy in Russia? 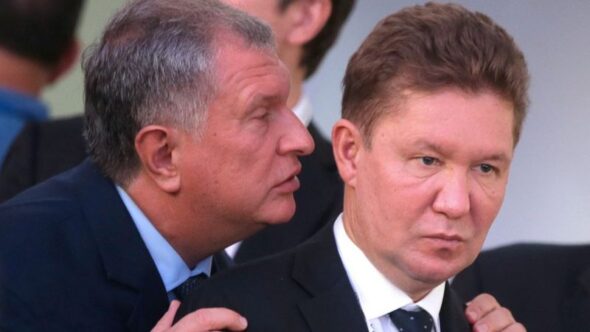 Gazprom and Rosneft are the two largest energy companies in Russia. Gazprom focuses on gas extraction, and Rosneft on oil extraction. However, the latter has been formulating increasingly bolder plans to enter the segment previously captured by the company from St. Petersburg, which raises concerns among the Gazprom management. Will Nord Stream 2 be the source of a new conflict between the CEOligarchs? – asks Mariusz Marszałkowski, editor at BiznesAlert.pl.

Clash of the Russian titans

In 2020 Gazprom produced 453.3 billion cubic meters of gas, which constituted 65.3 percent of the total gas production in Russia that year. Rosneft, the oil giant, currently occupies the third place on the list of the largest producers of natural gas in Russia. It is preceded by the privately owned Novatek, which exports LNG. Rosneft’s annual gas output varies between 60 and 70 bcm. However, the company’s plans are so ambitious that next year the production is expected to reach almost 100 bcm. This will be possible thanks to two new gas extraction projects – the Rospan Project with several licenses located in the Yamalo-Nenets Autonomous Okrug, which are estimated to contain a total of more than 900 bcm of gas, and the Kharampur deposit, located near oil deposits that are already being exploited. In total, both investments are expected to add 30 bcm per year of gas to Rosneft’s portfolio. It is expected that this will increase the participation of gas in the revenue of the oil giant to over 25 percent.

It would seem that Gazprom, which has such a large share in gas production and is the owner of Russia’s gas transmission system, which is the largest in the world, has an unshakable position. However, the Kremlin uses the fights between the “bulldogs” to increase the state profits, but also to temper politicians or businessmen who at some became too strong. In the history of disputes between companies in Russia, the Kremlin has always played an arbitrary role. Not ministries, not prime ministers, not shareholders, but the Kremlin. The most well-known examples of disputes are those between Rosneft president Igor Sechin and Nikolai Tokarev, president of Transneft, the Russian operator of the transmission system for oil and petroleum products. It is revealing that the quarrels have always been pompously publicized, e.g. through regular “audiences” with Putin where the competitors publicly, in front of cameras and microphones, complained about each other. Last year, representatives of these two companies argued several times in the press and on TV over the transmission tariffs for oil and oil products.

Gazprom has a monopoly on gas exports

Despite the fact that so far Sechin and Miller (the president of Gazprom) have not waged many public and contentious disputes, this may change from here on out. This is because Sechin asked Vladimir Putin to allow his company to export gas via… the Nord Stream 2 pipeline, which was built and financed by Gazprom. It has been suggested that this may be Russia’s way to respond to the Gas Directive, which had been amended due to the NS2 project, a development about which Wojciech Jakóbik wrote previously. However, the message from Russia is unclear.

According to one of the arguments, such a solution would make it possible for Russian gas to flow via the OPAL pipeline. Half of that pipe’s capacity has been blocked from Gazprom in a ruling by the CJEU. It would therefore be logical for Rosneft’s gas to be transmitted through Nord Stream 1 rather than Nord Stream 2.
The reality may be more complicated and not go beyond Russia. The current legislation defines Gazprom as the only exporter of natural gas outside Russia that can use the gas pipeline system. A few years ago, during a long-standing dispute, Gazprom itself strongly opposed the granting of an LNG export license to the private company Novatek. In the end, however, the company received the permit, and Gazprom came to terms with this fact. It was possible, because the company kept the main tool for exporting gas – the pipeline system. Not only that, the company was constantly designing and building more pipes – to Turkey, Germany or China. In recent weeks, however, Miller’s peace was disturbed by Igor Sechin’s proposal made to Putin. In this request, Sechin, using economic arguments, asked Putin for access to 10 bcm of capacity in Gazprom’s pipeline to sell gas outside of Russia. The president of Rosneft argued that the Russian budget could benefit from the current gas prices on the market in Europe. In the opinion of Rosneft, the sale of the 10 bcm of gas will bring an additional EUR 500 million in revenue in taxes and excise duties, from which Gazprom is partially exempt.

10 bcm is a small amount, equal to the annual import of gas from Russia through Poland. However, the request is undoubtedly about Rosneft putting its foot in the door on its quest to challenge Gazprom’s monopoly. Putin ordered the government to address this issue and work on it. In recent days, Deputy Prime Minister for Energy Alexander Novak has presented the findings to the president. According to the Kommersant daily, when asked whether Rosneft should receive the consent to export gas through an agency contract with Gazprom, most of the offices and ministries replied it wasn’t a bad idea. The Ministry of Economy was sceptical, because it believes that the risks associated with the competition of two Russian state entities in foreign gas markets should be assessed first.

Of course Gazprom is against this proposal. According to the company, strategic decisions cannot be made on the basis of a short-term price trend in Europe. The gas tycoon also believes that it is unlikely that such high gas prices will stick throughout next year, which calls into question the point of granting Rosneft access to the pipe. Gazprom also did not hesitate to make a dig at its competitor.

Gazprom noted that Rosneft already has problems with meeting domestic demand for gas as a producer, and is forced to buy gas from other companies operating in the Russian market.

Whatever the outcome of this particular story will be, the oil competitor is becoming an increasing nuisance for Gazprom. Especially since Sechin isn’t hiding his gas ambitions, and with each year, and especially during the development of the deposits under the Vostok Oil project, the supply of gas from this company will grow. Rosneft is not privately owned like Novatek, which also had to go a long way through the Russian system, and for which the door to the Kremlin are always open. Gazprom will have to react, and this may also have global repercussions. It may turn out that the extremely high price of gas in Europe is not at all a salvation for the St. Petersburg concern, and in the context of various internal risks it appears as a nuisance. However, looking more broadly, the dispute is marginal in the context of the main shareholder – the Russian state, whose policy both companies have been implementing to a T for many years, despite differences and internal divisions.

Jakóbik: Europe’s energy hybrid war is less visible from afar
Energy
Travelling makes you stop and think. Things that are obvious in Poland and Lithuania are unimaginable in Great Britain. This explains the lack of […]
More

Polish Briefing: Central and Eastern Europe Countries Summit. Gazterm 2017. Against Gazprom.
Energy Nord Stream 2 Polish Briefing
What goes in Poland on 17th of May? Related posts: Why is Gazprom enjoying the European Commission’s leniency? Malfunction of Yamal yet another […]
More