Should Poland buy energy generated at a Russian nuclear plant in Belarus? 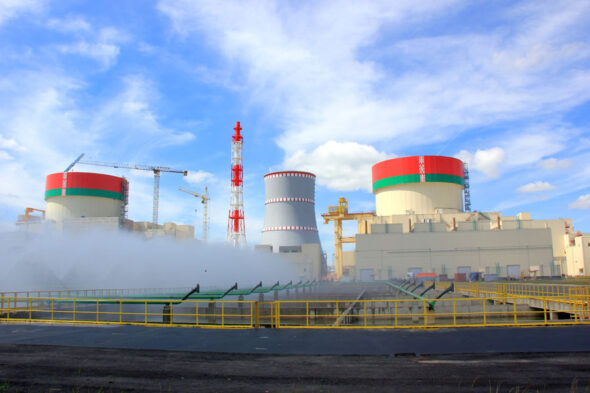 At the beginning of November the first nuclear block in Belarus’s Astravets NPP will be launched. It will take time before it will actually begin commercial operation, but it is a good moment to ask the question that has been pondered over for years: should Poland buy power from that NPP? – Mariusz Marszałkowski, editor at BiznesAlert.pl, writes.

A discussion on energy from Belarus

The electricity deficit in north-eastern Poland has been a long standing problem. The discussions on how to solve it have continued for over a decade. The issue persists because the area is located far away from mining sites, e.g. of coal, and sufficient gas transmission infrastructure, which would make it possible to build conventional power plants. When discussions on tackling this issue started to emerge a decade ago, it seemed reasonable to consider working together with Poland’s neighbors, especially Ukraine and Belarus, to handle the problem.

Back in 2008, Member of Parliament Jarosław Matwiejuk officially asked the government whether it was planning any cooperation on the issue of addressing the energy needs of Poland’s north-eastern voivodships and if yes, which neighboring countries were being considered. The then secretary of state at the ministry of the economy, Joanna Strzelec-Łobodzińska replied that “the Polish government puts a high priority on cooperating with Belarus and Ukraine on power-related issues. During the proceedings of the inter-governmental committees on economic cooperation under the patronage of the Ministry of the Economy and during bilateral meetings, the parties discuss new investments in energy generation, modernization and expansion of the existing cross-border connections and the possibility of exchanging electricity. (…) The cooperation with Ukraine and Belarus is becoming especially important due to the possible increase in demand for power in Poland. (…) At the same time we are also seeing a lot of interest in cooperation with regard to the power sector between companies from Poland, Ukraine and Belarus. PGE SA is now in extensive negotiations with businesses and administrations of Poland’s eastern neighbors about modernization and construction of new cross-border links, but also on developing new capacities in those states with the participation of Polish capital.”

The interest in purchasing energy from the East started to emerge after 2011 when a few important events took place. The first one was PGE’s decision not to construct a nuclear power plant in Visaginas with the Baltic States. The company also rejected Russia’s offer to buy power from the Baltic NPP planned in Kaliningrad. The second was the contract to build a nuclear power plant in Belarus’s Astravets signed in 2012.

Since the idea to buy power from Kaliningrad was rightly criticized as a move that went against the overarching goal to become independent of energy imports from Russia, for many the purchase of energy from Belarus seemed reasonable. Especially that at that time there was a thaw in relations between Belarus and the EU. However, it quickly ended after the opposition had been brutally pacified after the presidential election in December 2010. The motivation behind transactions with Belarus was driven by the desire to create deeper business ties with Poland, the fact that the planned NPP would generate more electricity than Belarus could consume, the lack of any real possibility of building an NPP in Poland, as well as the piling up of issues caused not only by the energy deficit in eastern voivodships, but also the EU’s increasingly ambitious climate policy, which impacted the future of Poland’s energy sector as a whole, which is mostly based on lignite.

After the protests had been crushed, the EU sanctions against Belarus’s “elites” were reinstated and it quickly turned out that any hopes for an “economic westernization” of Belarus were false. Alexander Lukashenko did not intend to politically reorient from Moscow to the West, but he still counted on acquiring foreign currency by selling energy to the West. The picture was complete, when it was decided that the Belarusian NPP in Astravets would be based on Russian technology and paid for with Russian preferential credit under the control of Russia’s Rosatom.

Why shouldn’t we buy power from Astravets?

Today Poland’s ruling elites are not talking about buying power from Astravets, even though Belarusians are still hoping this will happen. Either way, it is worth explaining why this should not take place.

First, by buying power from Astravets we bolster Lukashenko’s regime in Minsk. The goal of the NPP (contrary to the propaganda claims on limiting energy dependence on Russia) was to create another, next to the petrochemical and fertilizer industries, state-run entity that would strengthen Belarus’s centrally managed economy. By exporting energy to Poland, Ukraine and the Baltic States, Lukashenko’s regime wanted to create another opportunity to acquire “hard” currency, without the necessity to introduce the free market in his own country. Moreover, for cooperation to flourish it needs to involve partners that are sensible and strategically stable. How sure could Warsaw be that if its relations with Minsk worsened (which happens regularly every few years), Belarus would not cut off the power? Even without such a tool, the Belarusian ruling class does not act logically. However, if it did have such leverage, Polish consumers would quickly experience “cold and darkness” in relations with Belarus, which is often the main goal of an economic blackmail.
Second, since Rosatom was chosen as the main contractor and provider of technology, and the Russian state is the creditor, the NPP in Astravets, apart from its location, will have little to do with Belarus. According to the credit agreement, whether or not the NPP will generate profits from exports, Russian companies will profit anyway from, among others, providing nuclear fuel, servicing or trainings, while the Russian state will earn on the interest from the USD 10 bn loan. Recently, it has been revealed that even though the facility has not been opened yet, it is already generating losses. Therefore, one cannot exclude that if Belarus defaults on the debt, the NPP will be taken over by some Russian energy company. The NPP in Astravets may be an attractive asset for Russia, but if its EU neighbors are not eager to buy power, Russia will not need to pretend it is a Belarusian investment. On the other hand, Belarus will be forced to set a minimum fixed price on the energy generated in the NPP, which would be paid by Belarusian clients. Poland is one of Europe’s leaders in implementing gas diversification. It would be hard to imagine a situation where under the pressure of short-term and uncertain interests, Warsaw would replace its dependency on Russian gas with reliance on Russian power.

Third, to make it possible to import energy from Astravets without intermediaries (i.e. without paying Lithuania for energy transfers via the LitPol Link), it would be necessary to invest in a power connection with Belarus. In 2018 Poland’s PSE dismantled a 220 KV Białystok-Roś link between the two countries. Therefore, at this point it is physically impossible to import energy from Belarus. It would cost millions to restore this possibility, and that investment would have to be paid for by Poland.

Fourth, the decision on not to import energy from Astravets is a gesture of solidarity with the Baltic States, especially Lithuania. Vilnius, which is located less than 50 km from Astravets, is the biggest opponent of the NPP. Lithuania meticulously recorded every issue that happened during the construction of the nuclear facility. And there were plenty of accidents and incidents to report, including the fall of the reactor core from a few meters above the ground, which happened during installation work. Belarus never commented on these reports, which suggests that the rush and the necessity to cut corners to save money were a direct threat for its safe functioning. Additionally, since the very beginning Vilinus has been outspoken about the real reason behind building an NPP in this location, which is to have another leverage to exert pressure on Poland and the Baltic States. This includes the attempts at undermining the plans to desynchronize Lithuania, Latvia and Estonia from the post-Soviet BRELL power system Thus, the NPP may also impact the Baltics’ attempts at finally breaking off with the issue that, despite so many years, has been gluing it to Russia. In Poland we are talking a lot about European solidarity, also in the context of energy security. Lithuania expects Poland to act in solidarity as well. By agreeing to economically doubtful profits, we would undermine the authority of a country that aspires to become a leader in Central Europe. This would enable Russia to pursue the “divide and conquer” policy.

Fifth, importing power from Astravets could impact Poland’s energy transition plans, including the construction of its own nuclear facilities. The Belarusian alternative could distract Poles from pursuing their own project, especially at a time when an economic crisis is possible. However, even without that, the plans to build an NPP in Poland are constantly postponed and time is running out. According to the latest version of the Polish Nuclear Power Programme, the first reactor is to be opened in 2033. This means we have 12 years to complete the investment. Still, the Polish energy sector has seen many plans and strategies, but despite the hype none of those have ever materialized. BiznesAlert.pl learned that this may change in October, when Poland will reportedly sign a contract with the U.S. on building an NPP.

How to get rid of the energy deficit in north-eastern Poland?

There are three ways to handle this issue. The first one is to build a combined cycle unit at the Ostrołęka power plant. Such an investment would provide enough power to cover the demand in northern Masovia, as well as Warmia, Masuria and Podlasie. The second solution is something that was not seriously considered a decade ago – dispersed power generation based on renewable energy sources. The dynamic growth of the PV sector shows that in practice, every household in Poland could add to the national power system electricity generated on its own roof or in its own garden. Additionally, there is PGNiG’s plan for biomethane plants , which may be a driver behind the emergence of micro-power plants that use gas from organic waste. Moreover, the power generated by offshore wind farms, that will be constructed on the Baltic Sea, will be of huge benefit as well. The third, temporary solution is to import power, e.g. via the LitPol Link. The power itself may come from the Swedish-Lithuanian link that runs on the bottom of the Baltic Sea.

All of the options have their pros and cons. None is free from drawbacks and imperfections. Despite that, all of them are a lot better than becoming dependant on power from a country that, in the face of a crisis, acts erratically and presents towards Poland an attitude that is unfriendly, to put it mildly. We should remember about this when during the pompous opening of the NPP in November, Lukashenko will be talking about unwise Poles who did not want power “from Belarus”.

Will Lukashenko give Putin “Belarusian nuclear energy” back? (ANALYSIS)
Energy Nuclear
On the anniversary of the Bolshevik Revolution, the 7th of November, an official opening ceremony of the nuclear power plant in Belarus’s […]
More

Nuclear energy is feared in Belarus, but there won’t be another Chernobyl
Energy Nuclear
For many years numerous experts have been concerned about Belarus’s plans to build a nuclear power plant. Safety issues as well as the political […]
More