Statoil and Polenergia wish to work together on offshore wind farms

Polenergia, the largest Polish private and vertically integrated energy group, signed a preliminary agreement to dispose of 50 percent of shares of its subsidiaries Polenergia Bałtyk II and Polenergia Bałtyk III implementing the construction of offshore wind farms with the capacity of 1,200 MW. The agreement was concluded with Statoil Group.

Having signed the promised agreement, Polenergia will acquire a partner who will substantially improve the perspectives of implementation of wind farms in the Baltic Sea. As one of the leaders of offshore investments in the world, Statoil group will introduce to the projects some new, proven and cost-optimized technologies as well as a new look at the Polish renewable energy sector from the position of a global player. The preliminary agreement provides for the transfer of 50 percent of shares in Polenergia’s subsidiaries, Polenergia Bałtyk II and Polenergia Bałtyk III, to Statoil. As a part of the signed agreement, an option was also granted for the purchase of 50 percent of shares in Polenergia Bałtyk I. The transaction requires a consent of the President of the Office of Competition and Consumer Protection in Poland.

Acquiring such a reputable partner confirms, on one hand, a positive assessment of the Polish market, and, on the other hand, the attractiveness of Polenergia’s projects, as well as expresses recognition for the quality of the works carried out by the company. Polenergia Bałtyk II and Polenergia Bałtyk III Wind Farms are a strategic investment that, when realized, will allow not only the company, but above all the Polish economy to obtain significant economic benefits. Expert calculations show that by constructing in the Baltic Sea wind power plants with the total capacity of 6,000 MW by 2030, the Polish GDP will gain PLN 60 billion, and the market will be increased by 1 additional 77 thousand new jobs. The domestic enterprises, directly or indirectly, will be able to apply for contracts for the supply of foundations, towers, cables and offshore transformer stations, provision of construction services, and potentially the production of rotors or delivery of ships.

“The prospect of entry of such a stable professional investor proves that the decision already taken in 2010 to get into the offshore wind energy in the Baltic Sea was the right one. Thus, Polenergia passed the test of credibility, which confirmed its professionalism and potential. A combination of strength and experience of Polenergia and Statoil group guarantees the implementation of the project that opens a new chapter in the history of Polish renewable energy. Above all, it will provide new generation capacities, so desired by the Polish power system in the coming years”, says Jacek Głowacki, director of the works of the Management Board of Polenergia.

Polenergia is the first and only entity in Poland having two legally binding environmental decisions and the signed grid connection agreement, which enable it to work on the technical design of two offshore wind farms with the total capacity of up to 1,200 MW. Polenergia’s offshore wind farms in the Baltic Sea will be located north of the coastline, at the level of Smołdzino commune and Łeba municipal commune in Pomorskie voivodship. Thanks to very good wind conditions in the Baltic Sea, and larger and more cost efficient Wind Turbines, the offshore wind farms will provide stable and competitive renewable energy to the Polish market.

From January 2017 a wind measurement campaign is being carried out by means of a LIDAR system. Also a geological investigation of the of the seabed and soil conditions is in progress. Furthermore, there are efforts to obtain the environmental decision regarding the offshore transmission infrastructure. The first electricity from Polenergia Bałtyk III Offshore Wind Farm may flow to the Polish coast in 2025, whereas from Polenergia Bałtyk II Offshore Wind Farm – in 2027. The lifetime of both offshore wind farms is expected to be 25 years. The projects expect that there will be Wind Turbines available in the market in the mid-2020s that exceeds 10 MW capacity per turbine. They are going to be the largest wind power plants that have ever been constructed in Poland. 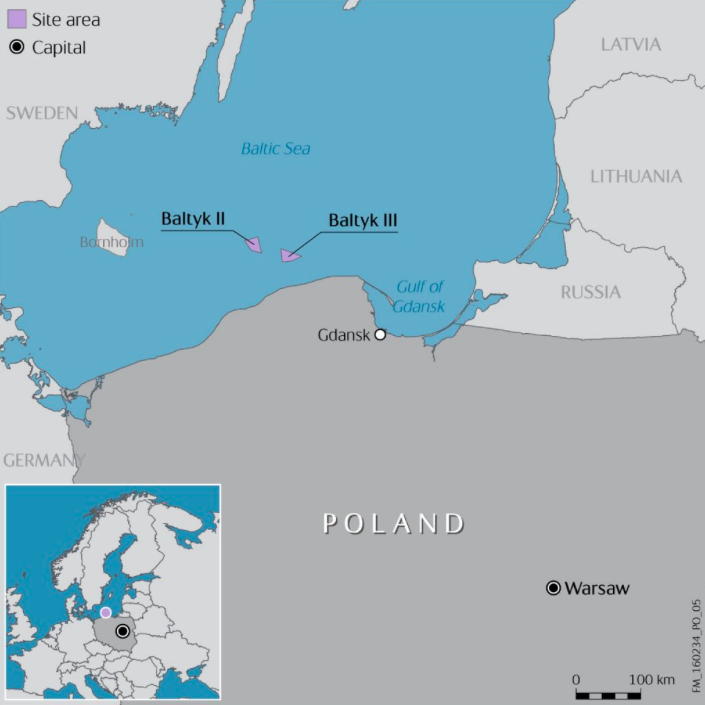 Statoil is also entering into a 50/50 joint venture with Polenergia to further mature these projects with Statoil being the Manager for the development, construction and operational phases.
“We are very pleased to have entered into a partnership with Polenergia, which is an experienced energy company with a growing renewable portfolio and in-depth knowledge of the Polish electricity market. Statoil has an ambition to grow significantly within renewable energy investing up to EUR 10 billion in profitable renewable energy towards 2030, and this acquisition strengthens our presence in the Baltic Sea area giving opportunities for scale and synergies in a longer perspective,” says Irene Rummelhoff, executive vice president of New Energy Solutions in Statoi

The Bałtyk Środkowy II and III wind farm areas are located in the Baltic Sea approximately 27 and 40 kilometers from the port of Łeba in water depths of 20-40 meters. Statoil is already developing the Arkona offshore windfarm together with EON in the German part of the Baltic Sea. The company is also operating three offshore wind farms off the UK coast.

Offshore wind already has a strong foothold in Europe with over 15 GW installed capacity, with a potential to reach between 50 and 70 GW by 2030. Polish Baltic Sea has a potential in excess of 8 GW, where the first 4 GW could be in operation by 2030.

“We are entering a market with growth potential through two of the most advanced offshore wind developments in Poland. The country is well-placed to develop a strong offshore wind industry that would create jobs and value in one of the most dynamic parts of the European markets. Following a dramatic reduction in cost for offshore wind, we are looking forward to work with our new partner, the Polish authorities and the Polish supply chain to advance offshore wind as a competitive source of energy and industry,” says Rummelhoff.

The closing of the transactions with Polenergia is subject to consent of the President of the Office of Competition and Consumer Protection in Poland.

RES on the Baltic can produce three times of Poland’s energy demand (INTERVIEW)
Energy Renewables
Nine years ago, having 85 percent of „black” energy and 15 green, we decided to switch it the other way aroundWe are now at the point where […]
More

Russia is threatening with a blackout. Disputes keep the Iron Curtain in energy supplies
Energy
Although the Iron Curtain has not completely collapsed in the power sector, Poland is fortunately on its safe side. If Latvia and Estonia do not […]
More