Steffe: Political discussion on climate change in Germany is not as productive as it should be 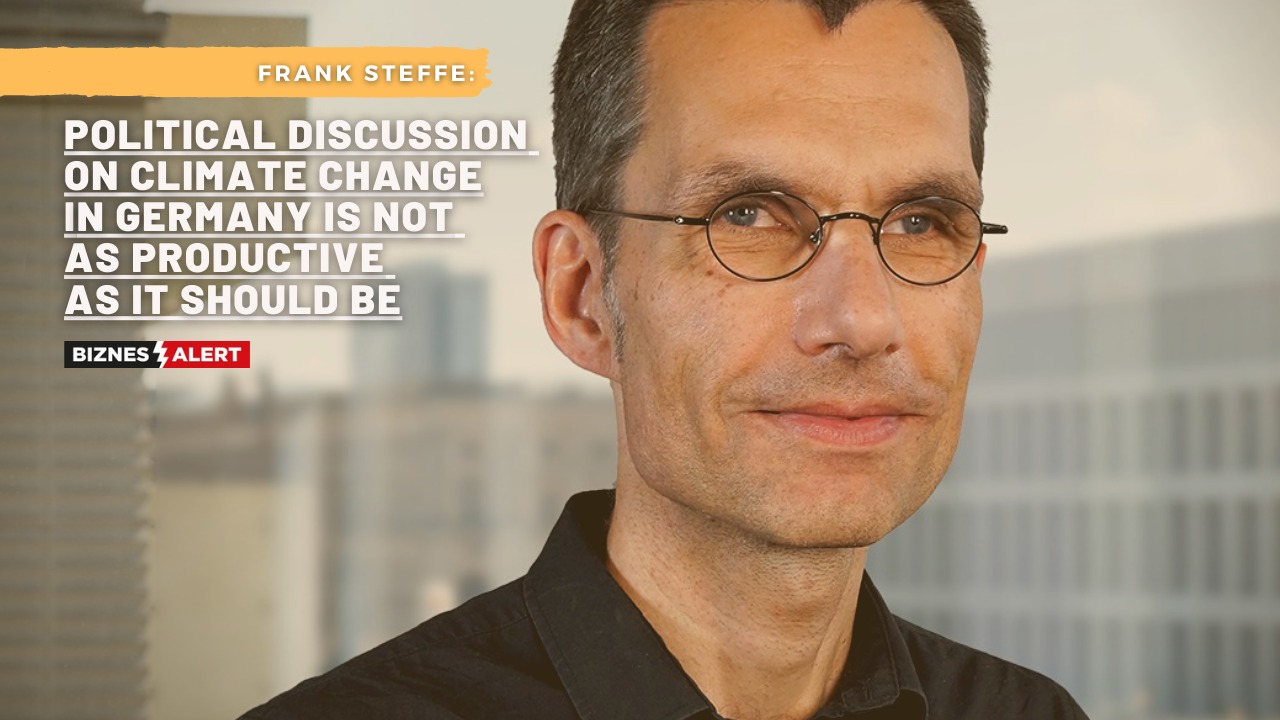 Current polls have shown that climate and energy policy is an important issue for a majority of the people in Germany. Nevertheless, the current focus of political discussions on climate change is not as productive as it should be – says Frank Steffe, Senior Associate Key Questions focusing on national and European policy at Agora Energiewende in an interview with BiznesAlert.pl.

BiznesAlert.pl: What are the predictions for possible coalitions, and how will it affect Germany’s path towards climate neutrality in each scenario?

Frank Steffe: Two things make this year’s federal elections in Germany special: First, the office holder is not running again for chancellor for the first time in electoral history of the Federal Republic of Germany. Second, it will be a crucial election in terms of climate policy. The next government has to clear the path towards climate neutrality until 2045 and take effective measures necessary to achieve the national climate goals in line with the international agreement. In the current legislative period, we only reached cross-party consensus on the need for higher climate ambitions in Germany – following a ruling by the Federal Constitution Court that the German Climate Action Act is not yet sufficient – but not for the measures needed. The main task in the next legislative period will be for a new political coalition to underpin the new climate ambitions – higher 2030 climate target and climate neutrality until 2045 – with effective climate policy. There are several options for political formations, but it is not our job to make election predictions. To achieve 65 percent emission reductions until 2030 as now set in the Climate Action Act, the next government has to take firm climate action.

What changes do German voters demand in the field of energy and climate policy?

Current polls have shown that climate and energy policy is an important issue for a majority of the people in Germany. The climate movement, most prominently Fridays for Future, continues to be present in the national debate and has regained public awareness after Corona dominated the public debate. Nevertheless, the current focus of political discussions on climate change is not as productive as it should be. Some political parties and stakeholders are avoiding important proposals and debates. They are still spending too much energy on what they don’t want to do, instead of proposing solutions for what they will do to ensure that Germany achieves the set climate targets. German policy makers have yet to make the shift from talking about targets to talking about action. The later the transformation is tackled by the responsible government, the more expensive it will be and the greater the risk of social upheaval.

What are going to be Germany’s future actions on international level for example towards the nuclear energy or fossil fuels like gas?

The German government supports the European Green Deal. The various proposals of the ‘Fit for 55’ package, presented today , define EU’s climate ambition.They need to be reviewed and discussed. The next German government will have to bring in a strong position to ensure the proposals and initiatives for new or reformed EU-directives are ambitious enough to make Europe a climate-neutral continent before the middle of the century.

The nuclear phase-out in Germany will be accomplished in 2022, and we will contribute our experience to the European debate on how to deal with nuclear energy. Moreover, after the phase-out of nuclear power and coal, the next big challenge is the end for natural gas. It is absolutely certain that in a climate-neutral future there can be no more burning and using of fossil fuels – neither in Europe nor anywhere else in the world. The renowned International Energy Agency (IEA) recently emphasized this in their Net Zero Report.

What policy to implement to fill in the gap after shutting down the nuclear reactors and keep the system stable?

The technological solutions for an stable energy system based on wind and solar energy have been available for quite some time. In Germany, we already have a share of almost 50 percent renewable energy in electricity generation. In the coming years we need a strong dynamic development of renewable energies, also to cover increasing demand from the production of hydrogen, for the use of electric cars and heat pumps. Renewable energies need to be supported by an intelligent energy infrastructure of grids, storage and further innovations. For a transitional period of about 10 to 20 years we still have to burn natural gas, particularly in combined power plants, but this has to end by 2045 at the latest. From then on, gas-fired power plants will only be used with green hydrogen as backup power plants when the wind doesn’t blow and the sun doesn’t shine.

The fight for Saxony-Anhalt. Greens are behind, CDU is back in the game
Climate Policy Energy
The German Superwahljahr is in full swing. Last Sunday a state election in Saxony-Anhalt, the poorest state in the republic that is also struggling […]
More