The border crisis is another argument against Nord Stream 2. Here’s what Poland can still do 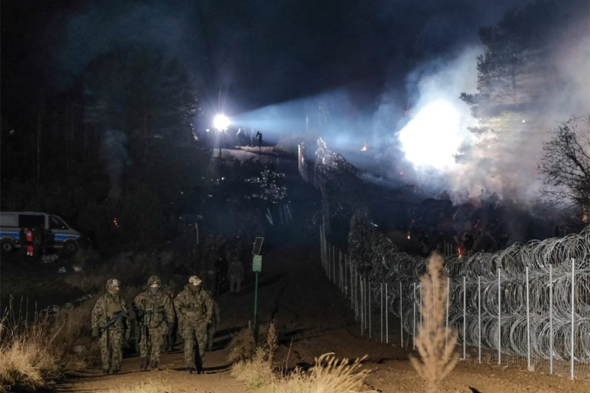 It is still unclear when gas will start flowing via the contentious Nord Stream 2 pipeline. The crisis on the Polish border should be another argument against giving Russia new leverage in the form of a gas pipeline, but the energy crisis may lead to a deal. In the meantime, however, we should tighten our belts to survive the high gas prices and monitor the certification process in Germany – writes Wojciech Jakóbik, editor-in-chief at BiznesAlert.pl.

The cherry on top of the crises in Europe

It is in the interests of Poland, the European Union and NATO to freeze the Nord Stream 2 project until the energy crisis and the crises on the Polish border come to an end, and until the situation on the border with Ukraine deescalates, as Kyiv is concerned Vladimir Putin’s regime may start a new military aggression. The Nord Stream 2 pipeline may allow Russia to maintain supply to Europe despite a possible conflict over the Dnieper, it may destabilize the economic and political situation in Ukraine, which still relies on the transit of Russian gas (the latest evidence is the blackmail of Moldova). This is the worst moment to give Vladimir Putin new leverage. Therefore, the suggestions in the media about the possibility of new US sanctions against Nord Stream 2 or freezing the process of its certification by the Germans, give hope to Gazprom’s critics, but should not lead to premature triumphalism. The procedure for certification of the Nord Stream 2 pipeline by the German regulator Bundesnetzagentur is in theory separate from politics. It consists in establishing whether the infrastructure complies with the provisions of the Third Energy Package, imposed on Nord Stream 2 under the amendment of the European Union Gas Directive, which was adopted, thanks to the efforts of Poland and other member states. This regulation has been challenged by the Russians in court, but is still in force.

This means that Nord Stream 2 must comply with the requirements of the Gas Directive, which include ownership unbundling, third party access and independent tariff setting. Each of these solutions creates problems for Gazprom. It is not clear whether Nord Stream 2 AG, which is 100% owned by this company, can be an independent operator. Admitting a third party is a challenge for Gazprom, but perhaps not for the Russian Federation. It wasn’t by chance that the Kommersant daily has recently published another commentary by officials of the Russian Energy Ministry that a Gazprom-Rosneft agency agreement was possible, allowing the latter to sell up to 10 billion cubic meters of natural gas annually, a move on which the British BP counts. This solution can also be questioned, but it would be a way to accommodate the regulator’s expectations. In contrast, independently set tariffs are the biggest challenge for Nord Stream 2, because they may lead to bankruptcy, as I wrote in BiznesAlert.pl. It has been speculated that Russians will subsidize transmission tariffs via this pipe to lower the price as much as possible, and will actually earn on gas contracts with companies, which are simultaneously business partners in the entire project.

The certification may take until January-February or even May 2022, depending on how quickly the German officials will work. In the worst case scenario, this would mean the deliveries will start two and a half years after the original deadline – the end of 2019. Hopefully, they will commence even later – after the extension of the interim supply agreement via Ukraine which ends in 2024, and after the end of the border crises and the energy crisis. Meanwhile, there is pressure from pro-Russian analysts, who are calling for a makeshift start of gas supplies through the Russian Nord Stream 2 before the certification process is done. This is done, for example, by the Oxford Institute for Energy Studies. The main argument is the energy crisis, which will supposedly be relieved only by the launch of Nord Stream 2. In fact, Gazprom could increase deliveries already, because the mere announcement of an increase in supply via existing routes would lower prices on the emotion-driven markets. For now, however, Gazprom is offering homeopathic doses of additional gas through Poland and Ukraine, perhaps to avoid more decisive action by Germany or the US. The litmus test is the level of gas in storage facilities in Europe under the control of the Russians, i.e. Heidach, Rehden, Jemgum in Austria and Germany. They are still insufficiently filled, and according to ICIS, Jemgum, the biggest one, will not be ready for the winter season. This means that the gas price crisis may last all winter, and prices that have already reached more than USD 800 per 1000 cubic meters, will perhaps drop to USD 500 in the first quarter, and return to the comfort zone of around USD 300 only in the second quarter of 2022. That is unless there aren’t any new, unforeseen events, such as a serious conflict in eastern Europe, which would overshadow the current gas crisis.

What actual tools does Poland have?

Poland, Ukraine and other critics of Gazprom’s policies, that are growing in numbers across Europe, are arguing for new US sanctions and a new traffic light coalition in Germany. Even if the House enters new sanctions into the Pentagon budget bill, Joe Biden’s administration can suspend them, as it was in 2021. The opponents of the pipe also demand a second antitrust investigation into Gazprom. Even if the German Greens criticize Nord Stream 2, this issue may may not be part of the final coalition agreement, which, not incidentally, has been in the making for two long months. The antitrust investigation requires a legal basis and the EC’s good will, which has so far not cooperated sufficiently, and offered Gazprom a concession in the form of a settlement after the first investigation. The real tools at the disposal of Nord Stream 2 critics, that under their direct control are precisely the impact on the certification process, which was joined by the Polish PGNiG. It is no accident that Russian publicists are tearing their hair out over this fact. The Poles have legal arguments that will at least allow this process to drag on until the end of the crises consuming Europe, and perhaps they will be able to convince the Germans and the European Commission that Nord Stream 2 is not compatible with EU law. Russian expert Igor Yushkov regrets the fact that the Polish PGNiG entered the certification of Nord Stream 2, and that the Ukrainian Naftogaz and OGTSUA may join as well. “It’s sabotage. In fact, this is an abuse of position. Why are they in the certification process: It should include regulators with a completely independent position,” he lamented on Lenta.ru. This is not sabotage, but the use of the regulatory framework of the European Union to defend the interests of Poland, but also of the entire community, and, considering the border crisis in Poland and the escalation in Ukraine, also of NATO.

Kowal: Strengthen the European Commission (INTERVIEW)
Nord Stream 2 SECURITY
An interview with Paweł Kowal, a former deputy minister of foreign affairs and a member of the European Parliament, currently an employee of the […]
More