The Chernobyl Ark, and a history of the new sarcophagus 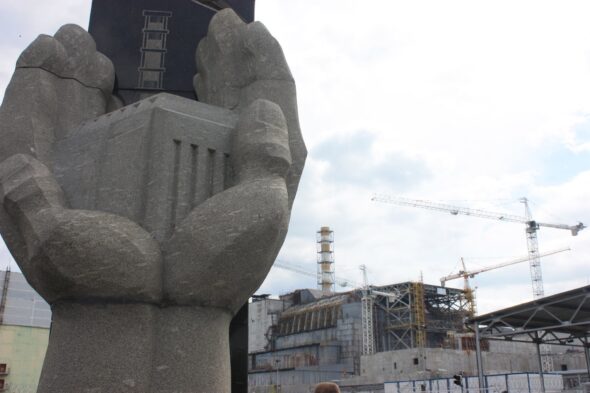 The „Укриття” structure, known as the “sarcophagus”, or simply “covering no. 4” was built just a few months after the disaster from April 1986. It was supposed to ensure safety for 20 to 40 years. In 2019 a new sarcophagus was officially launched, it was called the Ark. What is so special about the containments that cover the remains of the heart of Chernobyl’s fourth reactor? – Mariusz Marszałkowski, editor at BiznesAlert.pl, writes.

After the reactor no. 4 in the Chernobyl Power Plant exploded, numerous radioactive particles were released into the atmosphere. The radioactive cloud contaminated thousands of square kilometers across Europe and beyond. The fire itself lasted almost two weeks, but putting it down did not mean the fight with the consequences of the explosion was over. The exposed reactor whose cover, which weighted a thousand tons, was lifted in result of the explosion, was ejecting dust, smoke and radioactive steam. The Soviet authorities realized that the facility could not be left in this state, and that a covering had to be designed to contain the reactor no. 4.

The design of the Ukrytiye facility started on the 20th of May 1986, 24 days after the disaster. The design phase ended in mid August 1986. After that the construction began. It was split into a few stages, including securing and putting concrete on the area (a tunnel under the reactor had to be excavated and then covered with concrete to prevent the contamination of nearby ground waters in case the floor melted). This was done by 400 miners who worked 24/7.

After the concrete was poured in and the floor was secured, the workers started to build bearing and separation walls between reactors no. 3 and no. 4. Then a cascade wall was erected, the ceilings were reinforced, the roof of the turbine hall and the destroyed reactor were secured, and in the end a ventilation and filtration installation was built. The sarcophagus was not made completely tight. Over a dozen holes were drilled in it to monitor the reactor. The holes had locks and suitable filtration to make sure no radioactive substances would get out into the open.

To build the sarcophagus, over 400 thousand cubic meters of concrete and 7.300 tons of steel were used. The same amount of steel was used to build the 312-meters high Eiffel Tower in Paris. The construction of the covering in Chernobyl took 3.5 months and was a tedious and dangerous process. Due to the high levels of radiation, it was impossible to directly install the elements of the structure. To do that helicopters and cranes with extended jibs were used. Despite all of the difficulties, the builders had to be extremely precise, because part of the sarcophagus was put on the existing elements of the reactor hall. Any errors could have had disastrous consequences during the exploitation of the covering.

A new Ark over Chernobyl

However, due to the technology and other challenges, since the beginning the confinement was treated as a temporary solution. Already in 1992 Ukraine announced an international competition to replace the sarcophagus. 394 designs were submitted, but only 3 were selected. Among them was an arc-shaped confinement proposed by the British Design Group Partnership. The company proposed that the new covering have an arc-like structure. It explained that such a structure could be built at a short distance from the reactor itself, and then could be “slid” onto the destroyed building and the temporary sarcophagus with the use of special actuators. In 1997, 11 years after the disaster, the Shelter Implementation Plan was initiated. The goal was to build a new covering called the New Safe Confinement. The containment was to prevent any radiation outside of the new sarcophagus. 45 states took part in the program and pledged to jointly finance the new shelter.

The deadline for commissioning the new sarcophagus was postponed a few times. Initially, the investment was to be ready in 2005, then in 2008, 2012 and 2015. In the end it covered the old sarcophagus only in the fall of 2016. The delays were caused by issues with financing, growing costs (from the initially planned EUR 800 million to over two billion), and the prolonged testing of solutions. In 2007 the Ukrainian government signed an agreement with France’s Novarka consortium to build the Ark. Up to 1200 workers from 27 states were to take part in the construction. The new project is to protect humanity for at least 100 years.

The Ark is impressive. It is 110 meters tall and 165 meters wide. The arch’s outer span is 270 meters. The entire structure weighs over 25 thousand tons. Since 2018 it has been the biggest movable land-based structure in the world. Its installation started in 2010 and ended in 2016. The construction site of the Ark was 180 meters away from the no. 4 reactor. All elements of the containment were supplied and then assembled on site. The process of transferring the structure over the building, where the destroyed reactor was, started on the 14th of November 2017 and ended on the 29th of November the same year.

However, installing the new sarcophagus does not entirely conclude the work the no. 4 reactor needs. The melted reactor core is still under the old sarcophagus, and so is about 200 tons of radioactive material. There are two cranes inside the Ark, both installed under the roof. Their job is to disassemble the old sarcophagus, because it may collapse. It will cost at least EUR 100 million and take until the end of December 2023 to complete. The work is being carried out by a Ukrainian company Ukrstroymontazh. To exclude the risk of any contamination in case of an unexpected event everything is taking place under the dome of the new Ark. The elements of the old sarcophagus are to be decontaminated, and then transported to a specially prepared storage facility that is located close to the decommissioned power plant.

The construction of the new Ark revealed that despite difficulties safety needs to be put first. The sarcophagus will not generate any profits. However, the safety of not just Ukraine, but other states in the region as well, could be impacted if it wasn’t there.

Thanks to this investment, in the coming decades it will become possible to limit the exclusion zone around the power plant and reclaim the area, also for future investments. Ukraine is already planning to set up PV farms there.

Konieczny: Poland can’t afford to be irrationally afraid of the nuclear (INTERVIEW)
Energy Nuclear
Unfortunately, because of the phobias about nuclear power shared by a big chunk of the political class, many states give up on the only stable and […]
More