The energy crisis continues, an economic one and perhaps a pandemic one are in the making as well (ANALYSIS) 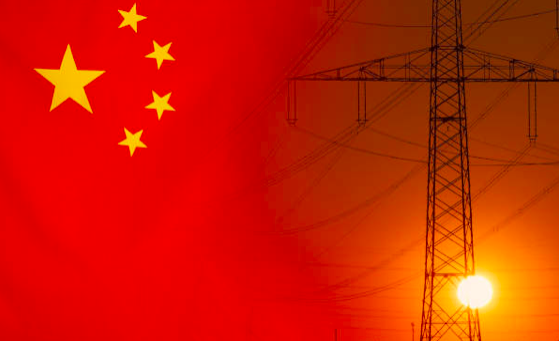 There’s an energy crisis, which may be followed by an economic crunch or a pandemic, or even both at once. Data from China do not inspire optimism – writes Wojciech Jakóbik, editor-in-chief at BiznesAlert.pl.

As I predicted in June 2021, the energy crisis caused by the production hiccup led to a shortage of power and energy sources on the market. By the way, the prediction that the setback may be used by Vladimir Putin has been confirmed, as Moldova, which is at risk of an economic collapse and political destabilization, has most painfully learned. Meanwhile, China is soaking up commodities like a sponge, LNG being a good example. The Chinese have signed three gas contracts with Venture Global LNG for 20 years, totaling 4 million tons per year. The gas is to come from Plaquemines LNG, a project that is waiting for the final investment decision. The demand among clients, such as the Middle Kingdom, should increase the supply of LNG projects in the US after the economic downturn, caused by the plummeting demand during the most severe restrictions related to the pandemic. The pandemic is receding, the demand wave is growing, and then there will be a wave of new liquefied gas projects in America. It is well summed up by Wood Mackenzie’s graphic showing that in the medium term Americans will be able to increase supply, and their customers – like PGNiG – will not run out of gas. This debunks the claim made by Russians that American LNG is fleeing to Asia and only supply from Russia, preferably via the forced Nord Stream 2, is the only “safe” option. The attractiveness of the European market is increasing, not decreasing, because of the energy crisis. The price of LNG supplies across the Pacific already exceeds USD 200 per 1000 cubic meters, while transport across the Atlantic is about USD 140. That leaves more room for supplier margins. Freight prices may drop once the demand falls after the heating season. However, it should be noted that the supply of LNG is also dependent on unforeseen phenomena, such as the failure of the Indonesian Botang LNG terminal, which wiped out 22.6 bcm of gas a year until it is fixed in mid 2022. For this reason, it is necessary to carefully monitor the safety of critical infrastructure, including Poland’s LNG terminal and the Gdańsk refinery, because in a region close to Russia, breakdowns sometimes turn out to be part and parcel of a hybrid war. 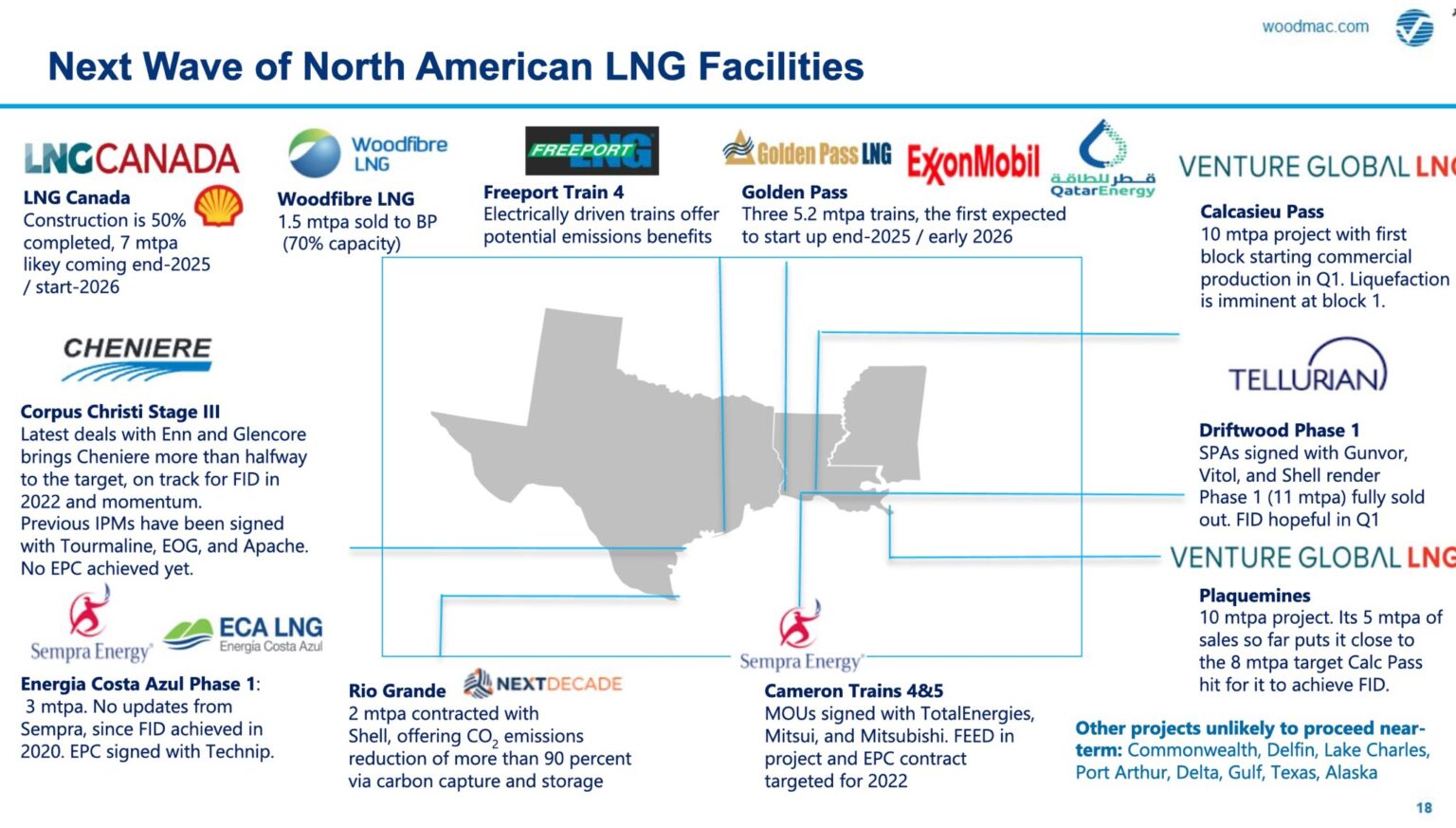 New LNG projects in the US. Picture by Wood Mackenzie

The economic crunch that will follow the energy crisis

However, the Chinese engine that is driving demand may stall. Perhaps that is why the Chinese are increasing the tension around Taiwan, which, by the way, is the main source of semiconductors for the world. According to Taiwanese foreign minister Joseph Wu, China is ramping up war rhetoric to divert attention from the country’s problems. In this context, data on the dynamics of China’s gross domestic product are interesting. In the first quarter of 2021 China’s economy grew by a dizzying 18 percent along with the pandemic rebound, but in the second quarter that figure dropped to “only” 8 percent and 5 percent in the third, despite the projected 5.3 percent. That’s the lowest rate in three decades. Growth between July and September 2021 quarter-on-quarter was just 0.2 percent. That’s the lowest growth rate in decades, not counting the first pandemic quarter of 2020. The Chinese economy did not receive a new stimulus package due to the need to subsidize the real estate market, which is facing collapse, because of the possible bankruptcy of Evergrande. Energy shortages forced the Chinese Communist Party to choose who should have their power cut off – citizens or companies. Fearing social unrest the communists chose the latter. This is just the beginning of China’s problems, because the secondary effect of the energy crisis will be the growing prices of energy and raw materials, which will undermine economic development because of inflation. Poland will have to grapple with the same exact problem. According to a Reuters poll, China’s growth in the whole of 2022 will reach 5.5 percent of GDP, compared to 8.2 percent projected for the whole of 2021. There is a risk that the central bank will not implement a new stimulus package due to the growing public debt. However, without it, China’s main growth engine – export, which still has not been replaced by domestic consumption and due to the energy crisis may not be in the coming future, will be extinguished. The first sign of an economic slowdown is the week to week drop of oil prices, which has happened for the first time since August 2021. The WTI blend was at USD 82.77 and Brent was at USD 84.44, both of which are expected to drop this week for the first time since the summer, when the energy crisis began. This may be a sign of a decline in demand, which is feared by the signatories of the OPEC + oil agreement, who have not increased production despite US appeals. The Joint Technical Committee recommended that the OPEC maintain the pace of loosening the agreement by increasing production by 400 thousand barrels per day for a month, as it expects the demand for oil will slow down. This may be a harbinger of an economic crisis. 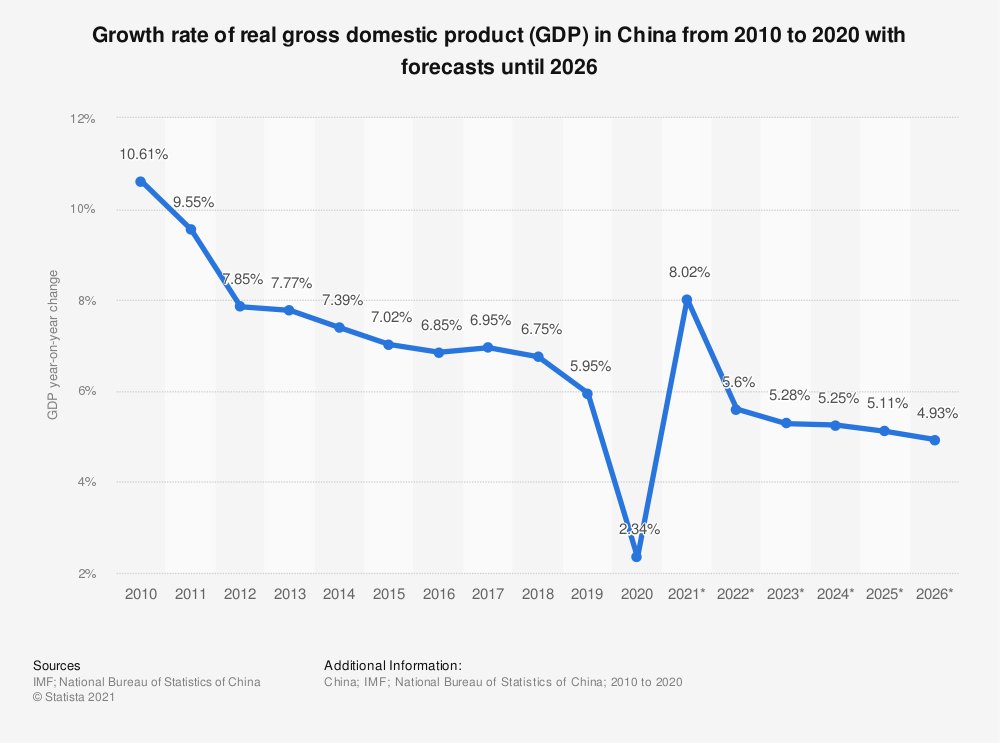 There may be another reason for the economic slowdown. Analysts believe that the slowdown in China results from, among other things, the continuation of pandemic restrictions due to the fourth wave of the coronavirus. The communists announced a zero tolerance policy when it comes to the virus, as well as the opening of a chain of covid quarantine centers in which foreigners are to be quarantined. This decision has been received negatively, because it portends the continuation of restrictions on business, and also suggests that the Chinese will not relax the pandemic restrictions that still apply, despite the fact that 75 percent of the population has been immunized with the Chinese vaccine. This raises speculation about the ineffectiveness of the Chinese potion, and the true scale of the pandemic, which may be a lot uglier than the official data provided by the regime in Beijing. On October 28 about 64 new infections have been recorded, including 16 “imported”, that is, coming from abroad. However, the scale of the problem may be greater, because for some reason the Chinese have not relaxed their restrictions. It is worth noting that Hong Kong, which is slowly losing its autonomy, has stated that more severe pandemic-related restrictions had been imposed on travel to continental China. However, this could cut the region off from the west and undermine business. The same can happen with the entire Middle Kingdom, especially if the communists are trying to hide some information. 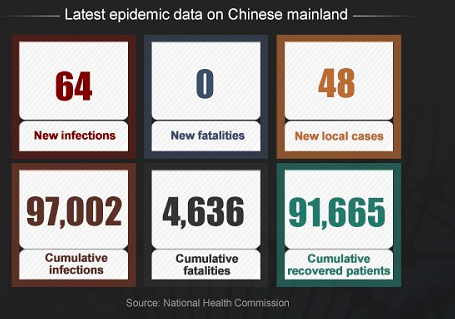 Data on the pandemic in China. Graphic: National Health Commission

There is no good news

To sum up, the energy crisis is adding to the global economic crisis that is already looming in China. If the demand for energy and raw materials falls because of this, prices should start to fall, but then consumers will have more worries due to economic and pandemic problems.

The coronaviurs still rules over oil. The biggest winner is… China (ANALYSIS)
Energy
The OPEC+ group is meeting again to talk about oil prices hoping for an economic rebirth, which is still under question, because of the news about […]
More

Question marks around Chinese expansion in Central Europe
Energy
The problems of the Chinese company CEFC in the Czech Republic pose a question not only about economic security related to Chinese investments, but […]
More

OSW: China’s CEFC has acquired a stake in Rosneft
Energy
On 8th September Glencore and Qatar Investment Fund (QIF) announced that the Chinese company CEFC would shortly finalise a transaction to buy 14.16% […]
More