The gas link between Poland and Lithuania: business and security (FEATURE) 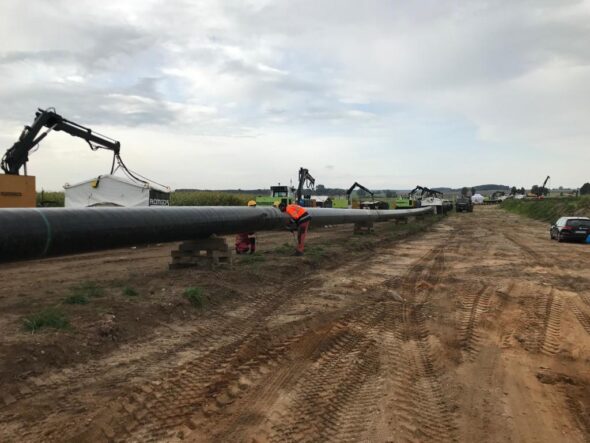 A gas pipeline between Poland and Lithuania (GIPL) is under construction in north-eastern Poland. GAZ-SYSTEM is responsible for the investment, which will connect not just the Polish, but also the European gas grid with the Baltic States. Apart from achieving this strategic goal, the project will also distribute gas across north-eastern Poland, facilitating the area’s economic development.

The Poland-Lithuania gas pipeline in numbers

First, let’s look at the numbers. In Poland, the construction of the GIPL is split into two sections – northern and southern (ca. 343 km in total), which run across the following voivodships: Masovian, Podlaskie and Warmian-Masurian. A new compressor station in Gustorzyn (Kuyavian-Pomeranian Voivodship) will be built, and the existing compressor station in Hołowczyce will be rebuilt. Both will constitute an integral and important part of the investment.

The construction of the new Polish-Lithuanian interconnector will necessitate the building of a few accompanying facilities, which are necessary for the correct functioning and safe operation of the infrastructure. Every 20-30 km along the pipeline, the so-called Block and Bleed Units will be constructed, together with power grid connections and access roads.

GIPL’s northern route will go across 5 poviats and 16 communes. To enable easier management, the construction was split into three parts:

GIPL’s southern section will run from the compressor station in Hołowczyce to Rudka-Skroda Shut-off and Relief Valve System, and go across 7 poviats and 17 communes in the Masovian and Podlaskie Voivodships. The construction is split into two parts:

It is worth stressing that out of the five companies that are involved in the construction of GIPL four are Polish.

At the end of September, GAZ-SYSTEM invited journalists to a study trip to the Rudka-Skroda – Konopki section of the gas pipeline.
Already about 30 percent of all works have been completed in this section. Every day about 1 km of pipes is welded. GAZ-SYSTEM ensures that all deliveries have been made, and the pace of the works shows that the investment will end according to schedule. Gas will flow here in 2022. “There are no redundant movements or people on the construction site. Everything is going according to plan,” Grzegorz Janowski, GAZ-SYSTEM’s head of the construction of section I, says. Before construction began, the trench was investigated for explosives and archeological artefacts. The majority of welding was done beforehand, the preparatory works before putting the pipeline in the trench are now taking place. The pipeline will cross existing infrastructure. To handle obstacles such as voivodship, poviat and commune roads, trenchless techniques are used, including two microtunnels.
“GAZ-SYSTEM’s mission is to ensure safe gas transmission for customers in Poland. The company is focusing on maintaining and developing gas infrastructure, which will satisfy the current and future demand of the Polish economy for natural gas. To achieve this goal we are implementing an investment program, which includes, among others, the construction of a gas interconnection between Poland and Lithuania. Thanks to such projects, the Polish gas market will become competitive and independent of political pressure or the impact of foreign monopolists,” Artur Zawartko, GAZ-SYSTEM’s Vice-President of the Management Board, said.

He also stressed that the Poland-Lithuania gas pipeline is an international project that will have a big impact on the EU gas market. The new gas pipeline will connect Poland’s and Lithuania’s gas transmission systems. This means the Baltic States, i.e. Lithuania, Latvia and Estonia will gain open access to natural gas from the west of Europe. The construction of the interconnection between Poland and Lithuania will benefit the communes along the pipeline route, because every year they will receive a property tax of up to 2 percent of the value of the pipeline section that is located in their area. The gas transmission network in the Podlasie region and the Warmian-Masurian Voivodship is the least developed gas grid in the country. Expanding it will make the area more attractive for investors, as well as benefit the environment and clean air.