Polish Briefing: Government removes the legal loophole that the Czechs used in dispute over Turów | Polish-Spanish talks on climate policy 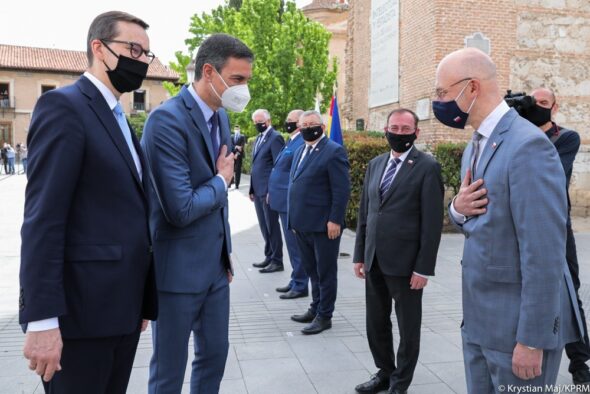 What goes on in Poland on the 2nd of June.

Polish government adopted a draft act amending the Act on the provision of information on the environment and its protection, public participation in environmental protection and on environmental impact assessment. Pursuant to the provisions of this Act of 2018, the license for the Turów Mine was conditionally extended. Now the government is removing this possibility. One of the arguments is the inconsistency with the EU law raised in the dispute with Czechia before the Court of Justice of the European Union.
The amendment will repeal the provisions that allow for the conditional exemption from obtaining an environmental decision for projects that involve a one-off extension of a license for the borehole extraction of hard coal, lignite and native sulfur.

One of the elements of the consultations were talks between representatives of individual ministries within the thematic tables. Michał Kurtyka, Minister of Climate and Environment, took part in the table devoted to energy and climate issues, where he held talks with Teresa Ribera, the Fourth Deputy Prime Minister and Minister of Ecological Transformation and Demographic Challenges of Spain.

“Climate and energy policy, also in the context of regulations at the EU level, has become an integral part of bilateral relations between Poland and Spain in recent years. In today’s discussions, we identified common interests and approaches. I strongly believe that this diagnosis will be helpful in strengthening our cooperation in the field of climate policy also on the EU forum,” Kurtyka said.

The consultations between ministers on the climate policy of both countries focused on several key topics. These were, among others just transition issues. As Minister Michał Kurtyka emphasized, Poland strongly supported the need for a just energy transformation. Poland and Spain share common challenges in coal regions, which undoubtedly brings our positions closer to this socially and economically sensitive issue. During the meeting, the participants also discussed supporting the development of electromobility and the possibilities of increasing the number of electric cars in both countries, as well as individual investments in photovoltaics and heat pumps on the Polish and Spanish markets. The consultations also concerned the issue of looking for cooperation opportunities under “Fit for 55”.

Polish Briefing: COP24 is a chance for Poland. The capacity market will stabilize RES
Polish Briefing
What goes on in Poland on the 15th of May. Related posts: Polish Briefing: Finland washes hands in the case of Nord Stream 2. Fortum-Uniper takeover […]
More