The New Deal is a social policy, but what about the energy that drives the economy? 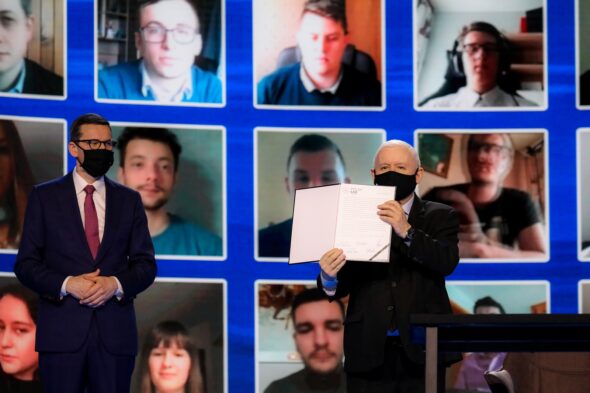 The governing coalition’s New Deal program emphasizes social policy funded from the EU’s Recovery Package. It fails to mention innovations in the energy sector, which may become the foundation of Poland’s economic development at a time of crisis – writes Wojciech Jakóbik, editor in chief at BiznesAlert.pl.

Same old for the energy industry

The New Deal was presented at a press conference of the United Right governing coalition on the 15th of May. “We need to show something that is the United Right’s trademark. Social policy,” Jarosław Kaczyński, chairman of the Law and Justice Party, said in his opening statement. And he was correct. The party, which is still considered right-wing, presented a social program worthy of the historical Polish Socialist Party revealing that the old tags no longer fit with the new reality. However, the plan failed to offer new ideas for the energy industry and climate, both of which were brushed off.

We should start with the fact that the New Deal has not proposed any new solutions on how to use the EU Recovery Package to the benefit of the energy sector. It stresses that nuclear power (referred to in the program as atomic power, which probably made physicians wonder) is Poland’s gateway to climate neutrality. The United Right did not question the deadline for achieving climate neutrality. Germany wants to achieve it by 2050, so a Polish declaration that would be a little less ambitious could be welcomed, but probably not by United Poland, which is part of the coalition. It is worth stressing that the decision on investing in nuclear energy has been stalled since 2015, because of the bickering in the United Right coalition. This is the reason why the first reactor is to be completed only in 2033. Because of the delay, Poland’s dependency on gas in the 2020s will not be alleviated, which will necessitate an import of 2.1-3.8 bcm of gas from the European Union or Russia in 2023, which is an election year. The possible dispute over purchases from Gazprom may be a destabilizing factor before the parliamentary elections at that time.

However, despite those issues, a nuclear power plant should be built to limit Poland’s dependency on gas imports. BiznesAlert.pl has reported that some in the government circles believe that 2035 is the more probable date. Such a delay is acceptable, because the negative effects of the delay will be visible already in the 2020s. However, if the preparations for building the nuclear plants with Americans, whom Poles favor, are done efficiently, the plant may be erected on time – in 2033. Nuclear power is necessary to provide a stable source of energy in times when large-scale energy storage and hydrogen economy are unavailable. It is worth adding that nuclear power may become another innovative sector of the economy, which will generate many jobs and economic growth. It is also necessary to build the additional 6-9 GW of nuclear capacity included in the government plans in order to lower the dependency on gas and… coal.

The New Deal does not indicate that gas is a transmission fuel, whose usage is still uncertain. However, if the EU taxonomy and other climate regulations, despite Poland’s efforts in Brussels, as well as issues with the pace of investments in Poland, make it impossible to build enough gas-fuelled power plants on time, it will turn out that Poland will be left with new coal built on the basis of a decision made by Ewa Kopacz’s government, together with new unit of the Turów Power Plant opened on the 14th of May, which instead of the Ostrołęka C Power Plant is to be Poland’s last unit of this type. It emits up to 800 g of CO2 per kWh and it will be the least harmful power plant owned by the National Agency for Energy Security, which will subsidize coal-fired power generation. The New Deal has not answered how the Agency will be sponsored, or how long it will exist.

The program does talk about becoming independent of oil and gas imports, but this proposition is either a substantive error (our deposits are too small to cease import), or a filler, with which the document is replete. Another reason may be that the coalition factions are in a serious disagreement over energy policy – United Poland is all for coal, the Agreement party supports green energy, and Law and Justice stands between the two. On the other hand the document talks about LNG virtual pipelines, a program that has been functioning for over five years, and about the Low-Emission Transport Fund, which was shut down in 2020. If the arguments within the coalition continue to delay new capacities, Poland will have to increase energy import from its neighbors and prolong the bankrolling of coal-powered generation.

Even though the New Deal mentions the hydrogen strategy, which is to be revealed in 2021, it does not propose any large-scale project to develop innovations. The Mój Prąd (My Electricity) and Czyste Powietrze (Clean Air) Programs will support technologies that lower electricity bills, such as renewable energy, energy storage, heat pumps, and improve air quality though building insulation. These are the black, or rather green, horses that are to make Poland’s energy industry more modern. However, the plan does not make any declarations on liberalizing the proximity act, which would pave the way for developing onshore wind. The document is also silent about the installation harbor for offshore wind, which could provide new jobs in view of decarbonization. It also does not say anything about the program to phase out coal or about the shape of a just energy transition in Silesia. There is no mention of the Izera e-car factory in Silesia either. These plans are present in statements made by the coalition politicians, but were not included in the New Deal. One can only wonder why – for substantive reasons, or because of the bickering in the coalition.

One can only hope that the power industry was disregarded in the the New Deal, just like foreign policy, which was completely omitted, only because the politicians wanted to focus on those issues that are the most relevant to the electorate of the United Right. However, the reason could also be that the coalition members are at odds when it comes to energy policy, which has been confirmed by the fact that the United Poland voted against adopting Poland’s Energy Policy until 2040. Formally the government adopted the energy strategy and the Polish Nuclear Power Program, and it wants to adopt a hydrogen strategy, which all include the Polish idea on how to do the transition. The National Recovery Plan provides for PLN 25 bn for the energy transition. Either substantive insufficiencies, or issues in the coalition made it impossible to include the transition in the New Deal. Yet, it is the energy transition that will lower energy prices and usher in innovations that are necessary for households and companies to grow. The New Deal is all about social policy, but to a large extent it disregards the key aspect of ensuring cheap energy for Poles, which may determine the competitiveness of the economy for decades to come.

Naimski: Energy policy must ensure security to Poland (INTERVIEW)
Energy
If it turns out that individual member countries will be able to calculate the costs of energy transformation, it will be a signal for the second […]
More

Jakóbik: Will Poland meet the expectations of EU’s climate policy?
Energy
The Polish government has a draft energy strategy for the upcoming decades. It remains to be seen how many of its propositions are possible to […]
More