The nuclear in the taxonomy, or how not to fall into Putin’s gas trap (ANALYSIS) 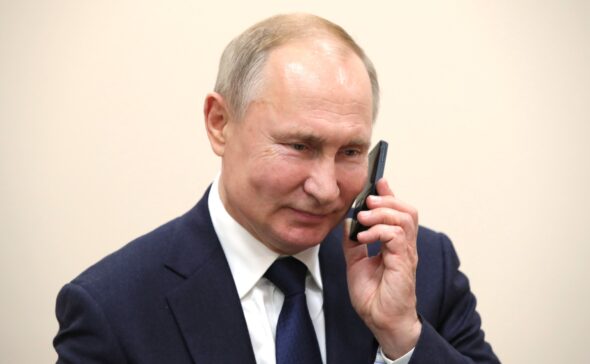 It is possible that the EU will bankroll nuclear power through its taxonomy scheme, just like gas, but new nuclear power plants and regulations on the security of supply of this fuel are necessary to avoid replacing the dependence on Gazprom with over-reliance on hydrogen. The Russians are already building a hydrogen valley in East Germany – writes Wojciech Jakóbik, editor-in-chief at BiznesAlert.pl.

Labeling atom and gas in line with Poland’s expectations

The EU taxonomy system, which will classify economic activities, will enter into force as of 2022. It will introduce specific definitions on the basis of which it will be determined which activities are sustainable from the point of view of the environment. It will be applied to, among other things, the power generation sector, favoring certain sources of electricity and giving them a chance for financing. The investments allowed in the taxonomy will not have problems with obtaining support from banks, which is needed to implement megaprojects, such as gas-fired heat and power plants or nuclear power plants. There is an ongoing discussion on how gas and atom will be classified in the taxonomy. Experts from the European Commission (Expert Technical Group, members of which are, among others, Maciej Bukowski and Georg Zachmann who contribute to BiznesAlert.pl) found that the atom helps to protect the climate and is safe. They have also declared that gas is a transition fuel, that makes it possible to start the energy transition as it can stabilize the unstable renewable sources. Thus, next to sustainable technology, they added a new term – transition technology. This opened the door to gas-fired power generation, including plants running on the so-called renewable gases, such as biomethane and hydrogen (from various sources), as well as CCS carbon capture and storage technology. There is still no agreement on nuclear power and gas. The fate of the atom and gas in the taxonomy is to be decided in a separate delegated act scheduled for the fourth quarter of 2021, and therefore realistically December 2021, giving rise to concerns about the safety of the taxonomy implementation date.

The political dispute over the taxonomy divided Europe into several camps, the most prominent of which arose, among others, with the participation of Poland. Warsaw has signed a letter prepared by Bulgaria, Czechia, Greece, Lithuania, Romania, Slovakia and Hungary in defense of gas as a transition fuel; and a letter drafted by Czechia, France, Romania, Slovakia, Slovenia and Hungary in favour of the recognition of the atom as a sustainable source. The silent hero of this discussion is Germany, which, on the one hand, wants to use gas for the transition, and on the other, demands the denuclearization of Europe. The dispute over these sources is largely between the countries of the Weimar Triangle, which may lead to a finale where a compromise that will allow for both atom and gas will be reached. The axiological resistance of Austria, whose reports on the harmfulness of the atom are based on data already questioned by experts of the European Commission, sits on the sidelines of this discussion.

Germany, on the other hand, will be interested in including gas in the taxonomy like Poland, but for other reasons. Poles must invest gas in the 2020s, because their NPPs will be ready as late as in the 2030s. Our western neighbors have nuclear power, but they want to give it up by 2022, and use gas to stabilize power generation from renewable energy sources. The Berlin-based think tank DIW estimates that moving away from the atom will increase the use of hard coal and lignite, as can be seen in Figure 1. 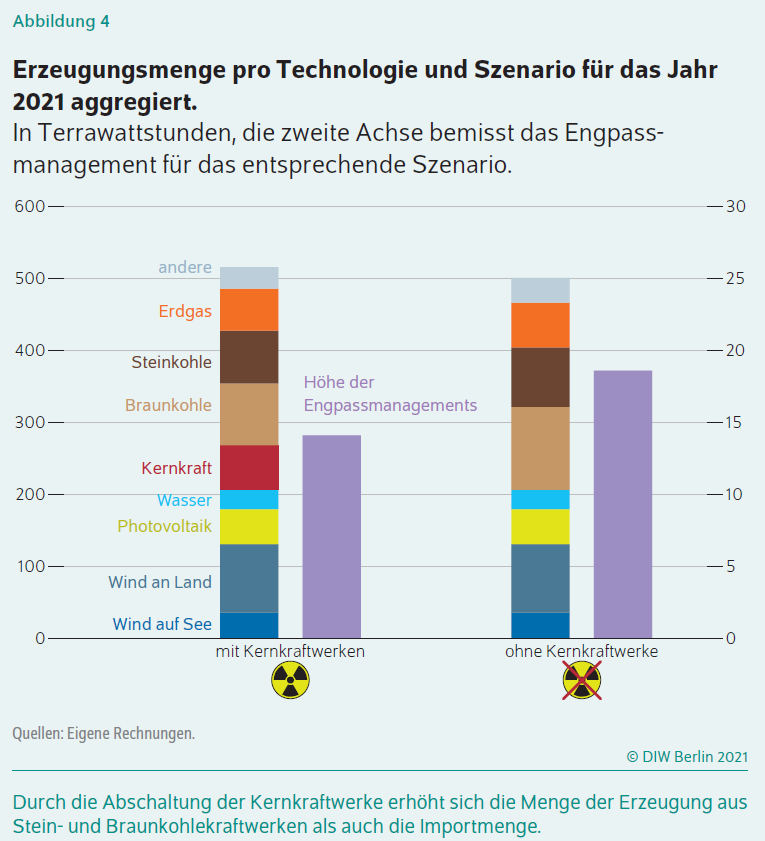 Although DIW argues that coal consumption will end around 2030, and gas consumption will fall sharply in the 2030s, because there will be enough RES to completely cover the energy demand in 2040, without an efficient energy storage technology, which is still unavailable, the usage of natural gas will continue to climb, as reported by BDI, an institution that represents the German industry and is more realistic. BDI calls for the provision of an additional 43 GW of energy from gas in order to move away from coal in 2030 with an 80 percent share of RES under the coalition agreement of the new government. According to BDI, the second chart, which shows how Germany’s energy mix will change, shows a dependence where the more RES grows, the more gas is needed for stabilization. According to rough estimates, 43 GW means about 40 billion cubic meters of additional annual gas consumption. 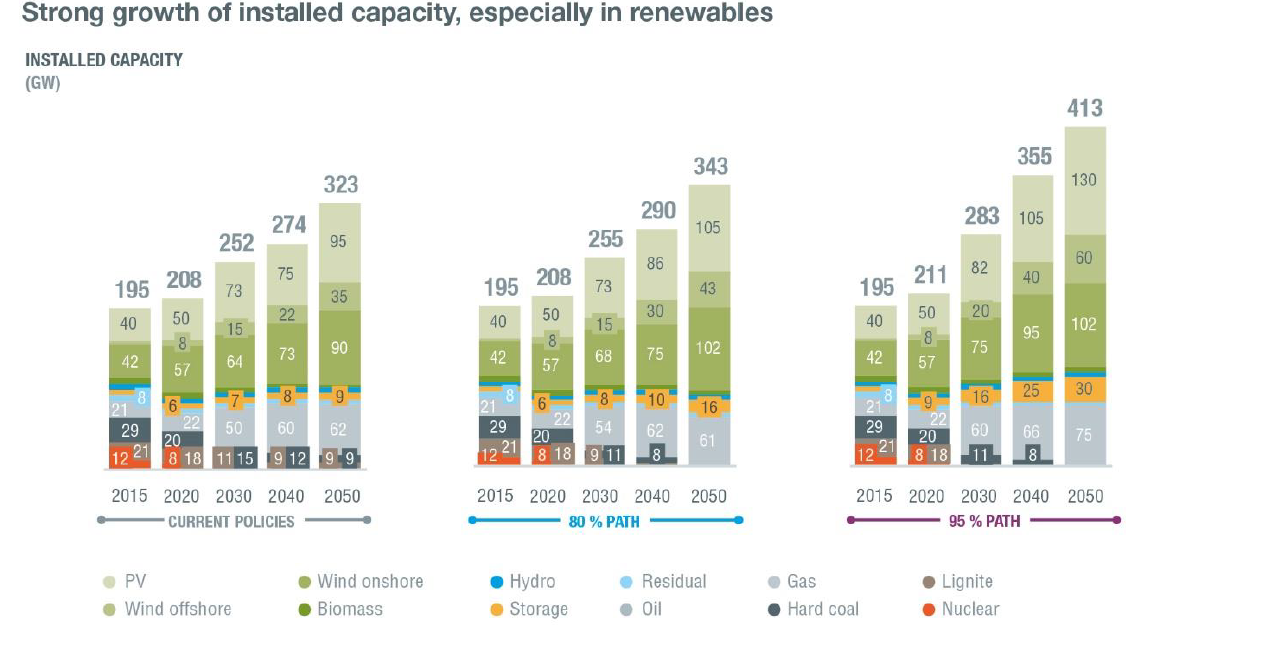 Figure 2: The growing role of gas in Germany. Chart: BDI

This is an important point, because it explains why, despite the fact that the coalition agreement doesn’t directly mention the disputed Nord Stream 2 pipeline (throughput is 55 billion cubic meters annually), it does talk about importing hydrogen from Russia. The BDI calls for the construction of a” hydrogen-ready ” power industry based on gas, so that it can one day run on this renewable, zero-emission gas. It could then come largely from Russia. German and Russian companies are already locating potential hydrogen investment sites in both countries, and Gazprom went as far as to present plans for the construction of a hydrogen valley at the Nord Stream 2 outlet in Mecklenburg – Western Pomerania with the help of Gazprom-Hydrogen. But it’s not just this company. Rosneft bought Shell’s shares in the Schwedt refinery, which is also to be used for the production of hydrogen. The Russians are setting up a hydroelectric basin in East Germany. Perhaps that is why President Vladimir Putin spoke at the Russia Calling! forum about the possibility of exporting hydrogen through existing gas pipelines from Russia. He argued that the Russian economy is one of the “greenest” in the world, despite the facts about the largest methane leaks from the local supply plants, which provide gas to, among others, Nord Stream 2. Gazprom is to prepare a report on the possibility of using gas pipelines for the export of hydrogen by June 2022. The company had previously talked about such a possibility, suggesting even a hydrogen Nord Stream 3. Regardless, the German-Russian economic symbiosis known from the natural gas sector and transferred to the hydrogen sector, can become an indispensable element of the energy transition, according to the model planned in Berlin, even after the Greens and liberals critical of Nord Stream 2 enter into a coalition with the SPD. It is to be expected that they will monitor the alignment of the contested project with EU law, but will not block it. This is why the BDI calls for gas to be included in the taxonomy as a sustainable source. German industry believes that the denuclearization of Europe should continue, as advocated by the Climate Ministry of the previous government led by Svenja Schulze of the SPD, because “nuclear energy is not an option in the fight against the climate crisis, nor is it compatible with climate goals”. This is not true, because without the atom, Germany may temporarily increase its dependence on fossil fuels and CO2 emissions, even though it will simultaneously increase the share of RES in the mix. This paradox shows the tension between the two climate policy objectives of the European Union as a whole – reducing CO2 emissions and increasing the share of renewables. The position of the BDI is detached from reality, like the demands of the Austrian climate ministry, which demanded a rebate tariff for countries that increase CO2 emissions during the energy crisis, so that they do not have to reach for the atom in order to reduce them. Meanwhile, the russification of the climate policy may prolong the dependence on raw materials from Russia, and cement the political risks associated with it.

How not to fall into Putin’s gas trap?

For this reason, in Germany a discussion is now unfolding on saving the remaining six nuclear reactors, and in Poland the government supports the construction of 6-9 GW of nuclear power by 2043. The Poles need the atom in order not to fall into the gas trap, but they will follow the path of Germany for the time being, since in the 2020s they will not yet have the reactors, and will defend gas in the taxonomy like their western neighbors. However, they should see to it that the free ride for gas in the 2020s, which may very well happen considering Germany’s support, doesn’t drag them and entire Europe into a deeper dependence on Russia, also in the hydrogen sector. The Jacques Delors Energy Centre has published a report showing that Gazprom is the only gas supplier to Europe that has spare export capacity, although it does not use it to its full potential, which is why it is accused of deliberately raising gas prices in order to force Nord Stream 2 certification (Figure 3). Meanwhile, Europe’s dependence on gas from Russia increased from 30 to 41 percent in 2021. 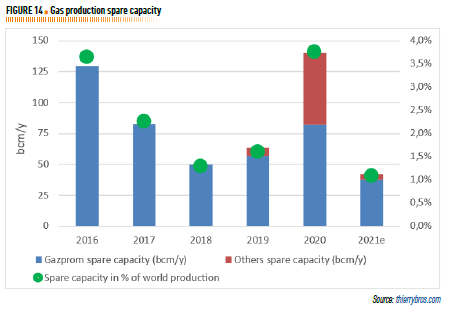 Figure 3. Gazprom’s spare capacity, which it does not want to use. Figure: Jacques Delors Energy Centre.

“With reduced domestic production (see Q1) as seen today in Europe, the Europeans have de facto reduced their diversifiation of supply and enhanced their import dependency. This approach has already backfied as it gives more market power to state-owned oil and gas companies that will benefit from increased market share globally… And behind Gazprom there is the Russian Federation with a clear agenda to weaken the EU and to punish Ukraine. Russian gas might well be the EU’s Achilles’ heel,” the authors explain. They recommend that the Council of the European Union ask Vladimir Putin to stop manipulating the price of gas in Europe, replace the Nord Stream 2 bilateral negotiations with the participation of Germany and Russia with multilateral ones, led by the European Commission, and introduce mandatory gas reserves throughout Europe along the lines of the solutions from France and Poland. They also recommend investing in energy storage to move away from fossil fuels more quickly. The alternative, but less fashionable in Europe, is a return to the atom, especially in the face of the development of new technologies that can accelerate the development of new reactors. For this reason, nuclear energy should be included in the taxonomy in addition to gas, but the admission of this second source should be supplemented by strengthened regulations on security of supply, which will protect against excessive dependence on one supplier, in order to reduce the importance of Gazprom in the gas market, and in the future of various Russian companies in the hydrogen market, which are already creating their own pockets in East Germany. Even if the hydrogen revolution doesn’t work, good old gas will stay, and Putin’s trap will snap shut.