There are two resolutions about the installation port. Neither is in force 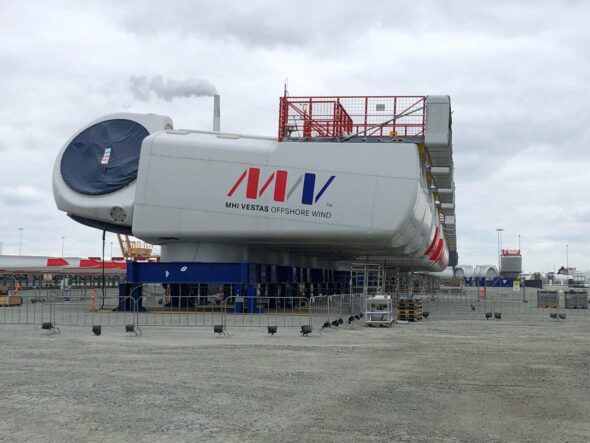 The Polish Wind Energy Association, the Polish Offshore Wind Energy Society and the Jagiellonian Institute have prepared analyses and scenarios on offshore wind farm development, where they brought focus into the domestic supply chain. The report has revealed that currently Polish companies are able to participate in it at 20-25 percent. By the end of the decade that figure may reach even 50 percent. What should we do to achieve that level? Whatever the expectations, building an installation port should be the first step. Yet, even though a resolution drafted by the Climate Ministry has been waiting for the government to adopt it, the Ministry of Infrastructure prepared its own version. We have two drafts, but neither is in force – Bartłomiej Sawicki, editor at BiznesAlert.pl, writes.

The report “Optimizing the Domestic Supply Chain for Offshore Wind Energy in Poland” shows that the demand for power, and the amount of power that is generated today suggest that there is room for about 4-8 GW of offshore installed capacity in Poland by 2030. The total capacity of the projects in the first phase of the development of offshore wind will be close to 6 GW. According to the report, the demand for power will grow during that time by 2.7 percent. However, it should be borne in mind that this assumption is based on a period that does not include the pandemic, during which the demand dropped, nor does it take into consideration the FitFor55 package, which assumes that power consumption will drop thanks to the energy efficiency strategy, according to which every EU member state has to limit power consumption. When it comes to the funding, the construction of offshore wind farms may cost PLN 51-100 billion by 2030. Such a surge in installed capacity in such a short time on a market where there not a single project of this kind exists yet, begs questions about the risk of accumulation of construction works and the demand for credits for the projects.

The probability that the supply chain may come under too much strain, can be minimized by developing a Polish installation fleet, harbor infrastructure and raw materials supply chain. The developers themselves gauge the participation of the so-called local content on the basis of the entire cost of a given project and information contributed by providers. The calculations also encompass qualified costs and the assessment of the local value input for every element of the construction of the farm. The authors of the report estimate that in the first round of the projects, the participation of Polish providers throughout the entire life cycle of the offshore wind farms could reach 20-25 percent, only to climb up to 45-50 percent after 5-7 years. According to the research, there are about 400 companies that are both active players in the global supply chain, as well as players that could enter it thanks to their experience in related sectors. One of the conclusions reached by the authors is that it is necessary to formulate a clear cut strategy for developing the most promising areas of offshore wind farms, supporting Polish local content and promoting providers on the international scale. This recommendation should be gradually introduced, as the offshore supply chain will develop.

So what can be done to maintain the local content at 20-25 percent? This level of engagement means there won’t be further investments and support. The estimates are based on turbines with a capacity of 10 MW and higher. However, to get to the achievable local content level – 50 percent – in the next 5-7 years, it will be necessary to provide regulatory support, engage market participants, and encourage substantial investments that need to be made by local and international players. International and domestic providers, as well as joint ventures with local suppliers will need to spend money on investments in new production assets, e.g. a blade factory. It will also be crucial that the so-called sectoral contract will be signed between the industry and the public administration. It will pave the way to a voluntary agreement on measuring and tracking local content in line with the adopted methodology. The Ministry of Climate and Environment has announced that such a contract would be signed by the end of August.

In which segments can the local content contribution be the highest?

At every stage of the project, the potential providers will participate at a different level. The biggest participation, 52 percent, will be at the stage of preparing and managing the project, whereas installation and commissioning will see the contribution at 11 percent. Operating, upkeep and maintenance will involve the local participation at 26 percent. When it comes to designing and producing complementary components, in 5-7 years the participation may reach about 40 percent, and for the offshore sub-station and cables even over 50 percent. At the installation and commissioning stage, the domestic engagement may be low, especially when it comes to turbines and foundations (5 percent). For cables it may climb to 20 percent.

The numbers on turbine design and production look interesting. There is no wind turbine factory in Poland, but it is difficult to expect such an investment will be made in our country in the coming years. Either way, we do have the potential, but only with regard to selected components: blades – up to 60 percent, parts of the nacelle (generator, base) – up to 30-40 percent. Indicators pertaining to the maintenance of the turbines look even better, as the participation of domestic suppliers may reach as much as 60 percent in this sector. Domestic suppliers will participate at 40 percent in the complementary components area, and at 70-90 percent in the harbor and logistics sector.

In the long-term 28 GW in offshore capacity could be developed in Poland by 2050. Thanks to that, the potential for upping the domestic supply chain participation could exceed 60 percent after 2040. A bigger increase could be a challenge, which seems natural considering the fact that for offshore wind farms in the EU to reach 300 GW by 2050, as the EU offshore strategy stipulates, they will have to be planned in a way that will allow them to operate across borders. The examples include joint offshore wind farm projects with Denmark near Bornholm, Germany near Rugen and Świnoujście, or Lithuania thanks to the experience gained by PKN Orlen and the permanent presence of Orlen Lietuva on that market.

A resolution will give the green light. But which one?

However, for the participation of the domestic providers to materialize it is necessary to – in every scenario – build an installation port. This might be the biggest problem. The construction of offshore wind farms is to start in 2024, and according to the National Recovery Plan that’s when the installation terminal is to be ready. The Plan has been already sent to Brussels and is waiting for the European Commission’s approval. An installation terminal is to be set up in Gdynia, and maintenance ports are to be built in Ustka and Łeba. The projects will cost EUR 437 million. Since March the sector has been waiting for the government to adopt a resolution that will launch the entire process of issuing permits and decisions and awarding financial support. During a press conference organized by the Polish Wind Energy Association (PSEW) and the Jagiellonian Institute, Kamila Tarnacka, Vice President of the PSEW, explained how complicated and time-consuming this process was. On the day of the conference, the government announced online it would adopt a resolution on the issue. The draft resolution of the Council of Ministers on the installation terminal for offshore wind farms says that in order to ensure that offshore wind develops successfully on the Baltic in Poland’s Exclusive Economic Zone and achieves the targets set in the Polish Energy Policy by 2040, proper harbor facilities to provide services to offshore wind farms, including an installation terminal for offshore wind, need to be built. The goal is to improve the state’s energy security and stimulate the development of the domestic economy.

The Ministry of Infrastructure, which wrote the resolution has admitted that today the infrastructure at Polish ports is insufficient to provide installation and maintenance services. This means it is impossible to achieve the targets and results detailed above. In order to solve this problem the government will have to adopt a resolution on building an installation terminal for offshore wind farms. The document will include a decision on preparing the Gdynia Harbor to become a facility that is ready to provide services to Poland’s offshore sector. The document is also to reveal how the costs will be covered.

The draft provides for building the required port facilities to service offshore wind farms (an installation terminal for offshore farms). The Ministry of Infrastructure has decided the port in Gdynia was the optimal choice. The government’s resolution is to be adopted in the third quarter of the year, but the reality is that the future of this project lies in the hands of the EC that needs to accept the National Recovery Plan, which may happen in August or September. The Commission may have many objections, which will postpone the start of the investments. However, the involved companies are hoping the whole thing will commence this year.

The Infrastructure Ministry’s resolution would not be strange if it wasn’t for the fact that back in March a similar draft resolution had been submitted, authored by the Ministry of Climate and Environment. The justification for that resolution said that the installation port has to be ready in time for the construction of offshore wind farms in the Baltic in 2024. According to the earlier draft of the resolution, the cost of the installation terminal was supposed to have been covered with EUR 437 million from the EU Recovery and Resilience Facility or other public sources, and money from the entity that will build the terminal. Which resolution will be adopted? The column “Information on the project being abandoned” is empty, so one could expect that formally it is still waiting to be adopted or rejected by the Council of Ministers. The resolution prepared by the Ministry of Climate and Environment was supposed to have been adopted in the first quarter of the year.

Polish Briefing: Tauron’s investments in energy system integration | Equinor will […]
Energy
What goes on in Poland on the 27th of May. Related posts: Coal capacity green-lighted by the government Dybowski: Orlen wants to choose an offshore […]
More