US State Department: nuclear power and gas from America will improve Poland’s and Europe’s security 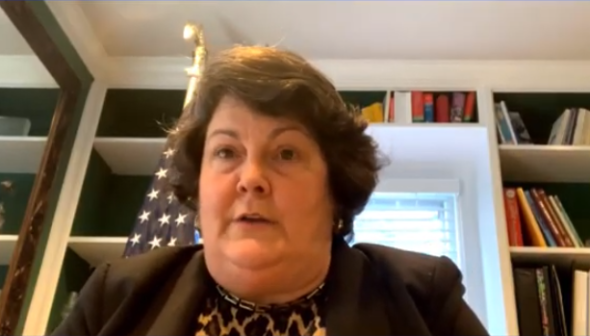 H.E. Ambassador Virginia E. Palmer Principal Deputy Assistant Secretary for the Bureau of Energy Resources at the U.S. State Department took part in a webinar organized by the Warsaw Institute. She talked about the importance of diversification projects pursued by Poland and the U.S to improve Europe’s security.

Palmer, who is also a former U.S. Ambassador to Malawi, believes that during the COVID-19 pandemic, America’s abundant resources can contribute to strengthening relations with states that need them. She also pointed out that when the oil prices went down last April due to the pandemic, the West, including the USA, limited oil supply to find a market-based answer to the challenges posed by the coronavirus. “More than a third of stimulus dollars in Europe are directed at the clean energy transition and the European Green Deal,” she stated. In her opinion, ensuring the security of supply chains is another important challenge.

“The United States and Europe are working more closely than ever on the supply chain issue (…). We believe Europe is more energy secure now than it was ten years ago, or even five years ago, because of the diversification of energy types, sources and routes. You can’t diversify only one of those things, having all three and diversity across all of those, gives you real choice, real optionality, and then real leverage over price which is very important,” she pointed out. In this context she mentioned new gas pipelines, LNG and oil terminals, as well as nuclear power plants, adding that the LNG terminal in Świnoujście and the Baltic Pipe will improve the diversification of supply, bringing in LNG from the U.S. “We don’t see the Baltic Pipe as a new project. We’ve been supportive of the project for many years, and I think it’s also evidence of the fact that it’s not that we care about these issues simply as a means to sell U.S. gas to Europe. The Baltic Pipe ensures that Norwegian gas can reach Poland via Denmark, or maybe Poland and beyond (…) our support for the Baltic Pipe is one of the many examples of, again, our support for European energy diversification,” Ambassador Palmer ensured.

America is doing its best to make sure its resources are as available on the global market as possible, also by offering new financial tools. When asked whether America will continue to support diversification projects and the Three Seas Initiative in view of the fact that Donald Trump lost the election she said: “The answer to that is a resounding yes”. She also confirmed America would keep its promise to support the Three Seas Initiative, a project launched by Poland and Croatia, with a billion dollars. In her opinion, American presence in Poland and other states in Central and Eastern Europe is also about “breaking unfairly subsidized monopolies by making significant progress on nuclear energy and fuel supply projects”. “The development finance corporation which is still a new tool in our policy arsenal has just been given permission essentially by our Congress to finance nuclear projects (…). The United States would like to regain its lead in the export of nuclear technology (…) We want to make sure that our our friends have options that are not associated with malign actors. (…) Poland, of course, Romania, Bulgaria, Slovenia and Ukraine are examples of clear bilateral nuclear energy cooperation (…) The United States government doesn’t operate in the same way that the Chinese government (…), but we hope we have some new tools to help our companies,” she clarified.
“The Nord Stream 2 project was designed to undermine, not strengthen Europe’s energy security (…) European over-reliance on Russian energy monopolies under the control of the Kremlin creates serious strategic vulnerabilities and here Poland was an early recognizer of this fact. Russia uses its strong market position to exert political and economic leverage on European governments (…) The Nord Stream 2 and the second line of Turk Stream are Russian export pipeline projects being built for the explicit purpose of allowing Russia to cut off, or significantly reduce Russian gas transit through Ukraine and destabilize Ukraine,” the former Ambassador summarized Russia’s motives for building the two gas pipelines. In her opinion Nord Stream 2 is a political project, not a business one. “We’d like to see Russian producers abide by the same rules as other open market players and we’re working to create the conditions where Russia no longer uses its energy resources as a political weapon or engages in other malign behavior,” she summed up.

According to Palmer, America’s resistance against Nord Stream 2 and the Turkish Stream gas pipeline results from the priorities of the country’s foreign policy, not a business plan, which is why the new administration in Washington will not change that approach. She also added that the U.S. was reaching out “to companies to warn them of the sanctions risk” if they continued to engage in the Nord Stream 2 project. She also commented on the misinformation according to which America is against Nord Stream 2 because it wants to sell LNG in Europe. “Our opposition to those pipelines is much more long-standing than our export of resources,” she stated plainly. “U.S. gas is at least as clean as Russian gas. We have data from lots of different international organizations that confirm that our emissions are lower and flaring is less intense in the production of U.S. gas than for Russian gas. The United States agrees with the world that we must significantly reduce methane emissions in the natural gas life cycle. U.S. firms are industry leaders in doing just that and that’s why, despite the fact that the U.S. natural gas production grew over 60 percent from 2000 to 2018, methane emissions from the energy sector declined more than 20 percent. We’re being very attentive to that,” she ensured. She also added that gas was a transition fuel during energy transition. “There’s some misinformation (…) I think it’s propagated by Europe’s leading supplier of gas to assert that U.S. natural gas is not as clean as others, and we’ve been working with the EU (…) to see if we can arrive at a common standard for the measurement of methane emissions,” she revealed. The Ambassador claimed that methane emissions per a cubic meter were a lot lower in the U.S. than in Russia. “U.S. gas is actually cleaner than many of Europe’s primary suppliers including Russia, whose methane intensity is 53 and 23 percent greater (…) than gas produced in the United States,” she explained.

When commenting on the European Green Deal, the former Ambassador stated that the U.S. was “engaging with the EU to see how American companies can participate in that and how American energy can help supply that transition. We hope that all forms of energy will be considered (…) The United States and U.S. firms are ready, willing and able to support European efforts to shift from coal to natural gas and other technologies.”