Vitrenko: Hydrogen diplomacy is a long-term solution. We need to avoid an invasion now (INTERVIEW) 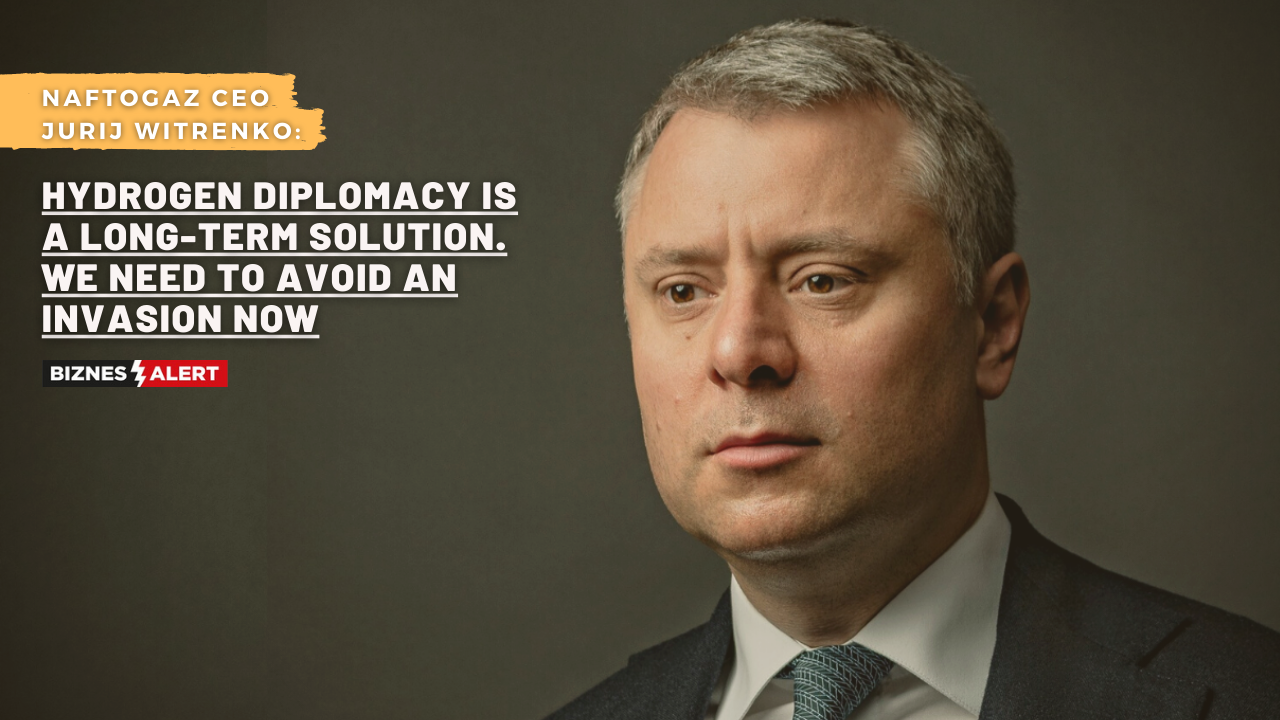 Hydrogen diplomacy is a long-term solution, for the next 5-15 years. We need a solution to avoid an invasion now – states Yuriy Virenko, Naftogaz CEO, in an interview for BiznesAlert.com.

BiznesAlert.pl: What brings you to Poland, sir?

Yuriy Vitrenko: We have meetings with PGNiG, PKN Orlen and Gaz-System. We consider Poland a strategic partner because of business and geopolitical reasons. It is in our interest to develop these relations. We have been discussing some practical partnership opportunities. Our talks are advanced. We have been in talks about those partnerships for a while, and finally there is a prospect of conclusion.

Do you want to sign a long-term gas deal with PGNiG?

No. We are discussing some production projects together to produce natural gas in Western Ukraine. We are talking about sustainable energy projects like biomethane, bio ethylene, biodiesel. Supply is discussed with Gaz-System, especially when it comes to infrastructure.

We hear that the Yamal-Europe pipeline supplies gas to the east. Is it an opportunity for you to import some natural gas through this trunkline?

We have not discussed this yet. I understand that Poland is interested in buying less natural gas from Russia, and will not extend its long-term deal with Gazprom. Russia is not a reliable partner, so we are not discussing any reverse flows of Russian gas through Poland.

We are in the midst of a tense international situation that may result in a possible Russian provocation against Ukraine. How likely is it that gas will be cut off?

In case of a full scale invasion, the risk of a gas cut off is really high. We hope there will be no invasion. To deter Russia sanctions and a stronger stance from the West are needed. We cooperate with Poland in this matter. Nord Stream 2 sanctions would be logical before the invasion. Germany and the U.S. have already said this summer that if Russia uses gas as a weapon, Germany will use its power to impose sanctions. We see that Russia is using gas as a weapon. Instead of imposing sanctions on Russia, now Germans are saying that if there is a full-scale invasion there would be some sanctions. They forgot about what they were saying. Those threats are empty. Russia may think that there would be no consequences for misbehavior, even if there is a new invasion on Ukraine. If they invade Ukraine, they could even take cities or citizens as hostages. Then Germany could say that if they do something more there will be sanctions. It is important to keep promises. The U.S. and Germany promised that there would be sanctions for using natural gas as a weapon, now is the time to impose those sanctions. They should hit not only Nord Stream 2 but also Nord Stream 1, the existing pipeline.

Is it even possible when Germany doesn’t have gas in storage? Are Europeans able to quit Russian gas as a part of sanctions?

Germans like to compare the present situation to the Cold War. They state that even during the Cold War natural gas was flowing from the Soviet Union. But back then Gazprom had no storage capacity in Europe, and was not allowed to own companies in Europe to sell gas inside Europe. Russians were selling natural gas on the border and German companies were using it. In our part of the world, we are already back to Cold War times, so we should ensure that Russians are not operating inside the European Union. Even without an invasion we should seriously consider going back to the times when Russians were selling natural gas on the border and then it went on to Europeans. European companies distributing natural gas in Europe are subject to European law, because of formal rules, but also because they adhere to European rules and governments have some supervision over them. This is exactly the problem with Nord Stream 2. Gazprom subsidizes Nord Stream 2 through its daughter company. It owns storage capacities in Western Europe. It has an impact on the European gas market through wholesale companies. That should not be allowed.

Is there room for another antimonopoly investigation against Russia’s Gazprom?

We are partnering with Poland on that. We have filed our own complaint with DG COMP about Gazprom abusing the market . We are saying that Gazprom is abusing its dominant position and it should be punished for that. There should also be some requirements imposed on importers of Russian gas to Europe. There should be some requirements to keep strategic gas reserves in storage, so in any given winter Europeans have enough gas in storage if Russians limit the supply. It would be possible to store this gas somewhere, for example as part of the Energy Community in Ukraine. This summer such importers should pump a lot of natural gas in storage, because Europe needs to understand that it cannot rely on gas supply from Russia next winter. The Chinese are already buying LNG from around the world to be safe in case of limits to Russian gas supplies. If someone wants to import Russian natural gas, it should be bought on the borders of Russia, so that Gazprom cannot operate inside the EU, and then leave some reserves, so Europe is less dependent.

What are the short-term solutions in face of the fact that we are out of gas in storage this winter?

There isn’t enough gas because Germany is closing nuclear power plants and cutting coal consumption. In the short term one should probably  refrain from closing nuclear and coal power plants in the middle of the crisis. Especially when German coal power plants are more environmentally friendly and if you close them, you make others, like Ukraine, increase coal usage. That is not helping on a global scale. The effort should be coordinated globally. When Germans are closing nuclear power plants, they are not abetting the energy crisis. Again, the Nord Stream 2 sanctions are a short term solution for Russia using gas as a weapon. This pipeline should work in line with EU rules. We are ready for competition with Nord Stream 2, but it is not compliant with EU rules. Gas reserves are also a short-term solution. We need specific rules this summer to store enough reserves for the winter.

How do you perceive the hydrogen diplomacy initiative?

It is a long-term solution, for the next 5-15 years. We need a solution to avoid an invasion now. Germans are talking about this hydrogen diplomacy, but nothing is happening. No investment, no clarity about taxonomy about what can be done and how, no information about hydrogen supply. There is some talk, but it’s not leading to anything practical. At the same time they are calling for developing hydrogen cooperation with Russia. It is disturbing. You want to replace natural gas dependency with hydrogen dependency on Russia. We should encourage good behavior. We should not reward Russian aggression and usage of gas as a weapon. Next time Russians want something, they will know that they need to misbehave, and they will be rewarded.

What about the positive side of this discussion: cooperation between Poland, Ukraine, U.S., Norway, and others on gas supplies?

There are some prospects for cooperation in the midterm perspective. Poland and Ukraine can produce more natural gas and biogas. We can work together to replace gas imports by producing more ourselves. It is also interesting to invest in photovoltaics and wind power. That was discussed with Polish companies. We have a big pipeline system with huge storage, Poland has gas transmission infrastructure and the LNG terminal in Świnoujście, another one is considered in Gdańsk, and the Baltic Pipe is coming online soon. We should work together to better use our infrastructure. Maybe we should invest to remove bottlenecks on the Polish side. There is a bottleneck close to the Ukrainian border. The network was designed to deliver Russian gas through Ukraine to Poland. If you want to transport natural gas from the Baltic Pipe or the LNG terminal, those bottlenecks will prevent usage of firm capacities when the gas flows from the direction of Ukraine. Poland was ready to get some EU funding to modernize its own infrastructure. It is a shame that such a big country and leader has such bottlenecks. It also means that parts of Poland still depend on gas supply from Ukraine and maybe Poland would like to remove this dependence. There is a reason to consider an investment that would ensure firm capacities from LNG and the Baltic Pipe to Ukraine. From there it could go even to Slovakia, Hungary or Romania. It is a great opportunity to decrease dependence of Poland on Russian gas.

Gaz-System says it needs a contract for such an investment to happen.

It is always the chicken or the egg dilemma. It is great to have a long-term contract, but in real life it is not like that. When you build a road, you would be happy to have a contract securing that there will be cars driving. In fact, you can invest in a road because you see that there will be a market developing and people will use your roads. Poland is strong enough economically and has a leadership position implying that it could act as a leader, not only following the demand, but creating opportunities.

In Poland we are in the middle of a big discussion on a long-term gas deal with Russia. Some say that because of the energy crunch we should stick with a long-term contract with Gazprom because it is currently cheaper. What is the lesson coming from Ukraine and Poland historically?

It is a big delusion that a long-term contract means cheaper gas. The majority of Gazprom’s long-term contracts are hub-indexed. The price is a hub price already. They are structured with a delay of 6-9 months. They use an average price, so the prices are not changing so quickly. On average it is a similar price to the hub-indexed, but it has smaller volatility. The problem of the current market is not volatility, but generally high prices. Long term contracts will not solve this problem, what will is producing more natural gas, biogas and addressing demand deficiencies, for example by limiting natural gas use in the power sector in Germany when it can be generated from nuclear or coal power. Energy efficiency is the best solution. Ukraine’s energy sector is 2.5 times less efficient. It should be doing much more and discuss very profitable investments in our energy sector with Polish businesses. We are meeting with PKN Orlen and PGNiG, and we are also discussing such cooperation.