What does the billion-złoty penalty imposed by UOKiK mean for the Nord Stream 2 project? 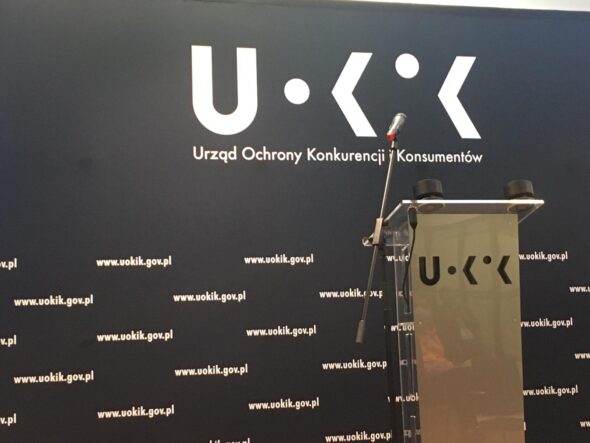 On the 6th of October, the Office of Competition and Consumer Protection (UOKiK) informed the companies engaged in financing the Nord Stream 2 project, about its decision to impose penalties for an illegal concentration scheme to build a gas pipeline under the Baltic. What does the penalty mean for the companies that are bankrolling this controversial investment? – Mariusz Marszałkowski, editor at BiznesAlert.pl, writes.

The two dimensions of the UOKiK penalty

The penalty imposed by the Polish anti-monopoly authority has two aspects. The first one is financial, the other one is legal and forces the companies that signed agreements to finance Nord Stream 2 to break off any cooperation with regard to bankrolling the project.

The first element of the sanctions imposed by UOKiK is related to money. All companies that are taking part in the illegal concentration were penalized, while Russia’s Gazprom received the biggest fine.

The penalties are equal to 10 percent of the annual turnover of the companies that are registered in Holland – Uniper, OMV, Shell and Wintershall, and in Switzerland – Gazprom and Engie Energy.

It is worth noticing that all penalties that have been so far imposed on all of the six companies, including the earlier fines on Engie Energy and Gazprom for not cooperating with UOKiK during its anti-trust investigation, total at over PLN 29 694 (EUR 6.7 bn), which just a little less than the initial planned cost of the entire Nord Stream 2 project at EUR 8.8 bn. However, it should be added that that cost had been calculated in 2018, before it turned out the project would face issues, first with the environmental permit from Denmark, then with the risk of U.S. sanctions, which in the end forced the main contractor – Allseas – to abandon the construction site.

The injunction to sever the agreements with Gazprom

The more difficult to bear part of UOKiK’s decision is the injunction to pull out of the credit agreements signed in 2017 between Gazprom and five European energy companies, on financing the Nord Stream 2 project, within 30 days from the date the decision was announced.

Interestingly, in result of UOKiK’s investigation we found out that the contracts included a stipulation about converting Gazprom’s possible credit into shares in Nord Stream 2 AG. This means that if Gazprom failed to pay off its EUR 950 m debt acquired from each of those companies (EUR 4.75 bn) its creditors would become shareholders in the Nord Stream 2 project. Thus, they would bypass the objections made by UOKiK in 2016.
According to some, such a solution would make it possible to adapt the investment to the Third Energy Package, especially in the form of participation of external partners in the shareholding of the company responsible for gas transition.

In UOKiK’s opinion this is against Poland’s and the EU anti-trust law, because of the country’s membership in the bloc. The Office also pointed out how the project was bankrolled. UOKiK believes that if the Nord Stream 2 project was a business venture, it would have been bankrolled either by the Russian government or financial institutions.

However, this did not happen. Western energy companies that usually do not provide financial services, decided to grant Gazprom a credit to finance the investment. This is an interesting fact if we consider that both Gazprom and Engie (both registered outside of the EU), were resistant to provide the Office with information during the investigation. The other companies had to most probably reply to the Office’s questions, because they were registered in the EU. Therefore, one could ask whether UOKiK was able to unearth the contracts “hidden” in Switzerland.

A question that is often asked in the context of UOKiK’s penalty is whether Gazprom will actually pay it, and what tool to execute that decision UOKiK has. First of all, Gazprom and the other companies can appeal the decision at the Court of Competition and Consumer Protection (SOKiK). Next, the parties may go to the Court of Appeal and in the end they may file another appeal to the Supreme Court. After exhausting all of the appeals in the country, the next step may be to file a complaint with the European Court of Human Rights (ECHR).

Since the appeal path is so extensive, it may take a few years for the UOKiK decision to actually enter into force. When reviewing the history of decisions issued by UOKiK in the past several years with regard to significantly smaller business entities, one could infer that the court proceedings that end up in the Supreme Court take five years on average. In case of Gazprom and the other companies, it will not take any shorter, and considering the sheer number of documents and the number of parties, as well as the historically high penalty in the anti-trust investigation, the court battle over maintaining it may be historically long.
Tomasz Chróstny, President of UOKiK, told BiznesAlert.pl that both Gazprom as well as Engie appealed to SOKiK over the previous penalties imposed for the lack of cooperation in the anti-trust investigation. Engie’s appeal has already reached the 1st Regional Court in Warsaw (SOKiK), whereas UOKiK is in the process of providing the relevant documents on Gazprom to the court. The Office has three months to do this from the moment the appeal is submitted.

One of the arguments UOKiK can use is that in 2015 Gazprom and the other companies informed the Office that they wanted to establish a joint consortium Nord Stream 2 AG. However, due to the objections and questions posed by the Polish anti-trust authority, the companies withdrew their application, which is synonymous with the Office not agreeing to concentration. Despite that, a year later the companies signed contracts to finance the project, which was against the EU anti-trust law (if the anti-trust authority does not issue a permit, the concentration as part of one company is forbidden).

The stipulations on the possible conversion of the debt into shares in the company, make the features of the illegal steps made by the investors complete.

However, if the decision is upheld by all Polish courts and the ECHR, Gazprom will be forced to pay the penalty plus the interest; which, considering the size of the fine and the perspective of few years, may increase it by a few billion Zloty. However, if the Russian company resists paying the fine, UOKiK may start recovery proceedings against the assets of Gazprom (and not only) that are on the territory of the European Union. It is worth mentioning that in case of Poland, Gazprom has 48 percent shares in EuRoPolGAZ, which owns the Yamal pipeline.

PGNiG’s victory in the arbitration proceedings at the Arbitration Court in Stockholm, as well as Ukraine’s victory at the same institution and the fact that Gazprom actually paid the imposed fines, show that when pushed into a corner, the company meets its debt obligations. This may also happen in case of the penalty related to the Nord Stream 2 pipeline. However, the effects of the mentioned actions will be visible several years after the physical launch of the pipeline, over which the entire battle is taking place.