Who will be the leader of hydrogen transmission in the Central and Eastern Europe region? 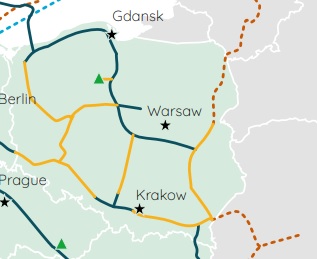 The prospect of a hydrogen economy is encouraging more and more companies in the European Union, including those in Central and Eastern Europe. Ambitious plans are being put forward by the gas industry which wants to be responsible for the large-scale hydrogen transmission and storage. GAZ-SYSTEM has for the first time announced its plans which envisage both the adaptation of the existing infrastructure and the construction of dedicated connections for hydrogen transmission to be completed by 2040. Thus, the Polish company, together with its Hungarian and Slovak counterpart, has joined the group of transmission operators who want to profit from hydrogen economy. The question arises as to who will dominate the transmission in the future in the CEE region – writes Łukasz Antas, Managing partner at Esperis Consulting, board member of Emerging Futures Institute.

The concept of adapting the gas infrastructure for hydrogen transmission was presented by a group of 11 transmission system operators (TSOs) in 2020 as the European Hydrogen Backbone. At that time, the plan presented a schedule for upgrading old and building new hydrogen pipelines for several Western European countries, but also the Czech Republic. Hydrogen transmission is considered to be an optimal way to transfer energy from large-scale RES installations over long distances, e.g. wind farms in the Baltic Sea, photovoltaics from North Africa or installations in Ukraine. The energy will be converted into hydrogen in electrolyzers which can then be mixed with natural gas (blending) or, after 2030, already sent through dedicated pipelines.

In the next iteration of the European Hydrogen Backbone strategy, presented on April 13, 2021, additional TSOs joined the previous participants, so that the plans now cover almost the entire EU. A very ambitious plan for hydrogen has operators from Sweden and Finland, who want to build pipelines dedicated to transporting clean hydrogen by 2030, which seems very difficult to achieve. In Central and Eastern Europe, Hungarians currently strive to be the most active state. In 2030, they should be ready to convert gas pipelines supplying large industrial plants and help them in their energy transition with hydrogen imported from Ukraine.  A Slovak operator is also positioning himself to transport hydrogen from Ukraine, although with its main destination in Germany and Austria, as the anticipated reduction in Russian gas transit via Ukraine forces Slovakia to look for new sources of revenue. This route is expected to be opened by 2035.

GAZ-SYSTEM’s plans to prepare the system for hydrogen transmission are more spread out over time. The first existing pipeline adapted to hydrogen transmission would be operational before 2035 and would be used to transmit hydrogen produced from energy obtained from wind farms in the Baltic Sea to central Poland, to the largest consumers such as Orlen and Anwil. In 2040, a network of hydrogen-ready pipelines is to cover most of the country and enable transmission of hydrogen from Norway, Ukraine, and the Baltic Sea to Polish consumers, German industry or further south. Hydrogen will be transmitted through Baltic Pipe (after termination of the PGNiG contract), through the Poland-Lithuania gas pipeline (both ways) and through connections with Ukraine, Germany, and Slovakia.

Poland still should be by 2040 one of the main consumers of low-carbon hydrogen in the CEE region due to its extensive chemical, petrochemical, and steel industries, even if other sectors (e.g. transport) do not switch to hydrogen. With strong domestic demand, Poland stands a better chance of becoming a leader in hydrogen transportation in the long term, as the profitability of pipelines supplying Polish, Lithuanian, and German entrepreneurs simultaneously may be higher than in the case of competing solutions.

Will all these visions be fulfilled? It is not obvious. On one hand, hydrogen has a lot of competition, because instead of this fuel, consumers (including industrial ones) can choose, i.a. electrification (e.g. transport or in industry), biogas/biomethane or industrial heat pumps. They can also use locally produced hydrogen which will never be sent through national grids.

The hydrogen strategy of operators needs to address many risks. There is a need to combine hydrogen concepts with a strategy of using biomethane, which is also strongly promoted by the EU. In agricultural countries such as Poland, Hungary or Ukraine, biomethane production seems to be an attractive solution, at least in some areas, but it may also require transmission.

On the other hand, no operator of the transmission system, such as GAZ-SYSTEM, but also of the distribution system, such as PSG, is waiting with folded hands because it is known that the new EU regulations will indirectly affect the natural gas industry. Despite the forecasts of the increasing consumption of this fuel in Poland, the operators are preparing themselves for new challenges – and other operators in the region will do the same. Especially that it is in the interest of the local economies. A number of large companies in the CEE region undertake actions to reduce their emissions. They also base their investment decisions on accessibility to alternative fuels, such as hydrogen. If politicians in the CEE region want to keep current industrial plants open and attract new ones to be placed in their country, modernization of the energy sector is needed, including facilitating access to hydrogen.

Taking care of hydrogen infrastructure, despite many risks and uncertainties, seems necessary. Decisions about the direction of business model change in terms of energy transition are necessary but also very difficult, because it is challenging to predict the direction of change. It is worthwhile for operators in the gas sector to intensify the dialogue with domestic customers, i.e. entrepreneurs, metropolitan areas, and potential foreign customers. Then it will be easier to choose the direction of action.

Bielawski: The first practical project in the hydrogen energy sector of Ukraine (ANALYSIS)
Energy GAS Renewables
The uniqueness of the Ukraine’s RGC Hydrogen Project is that the experiments started with almost pure hydrogen – 99% – and are moving on, […]
More

A hydrogen ready Poland, or how to pursue a strategy without a strategy
Energy GAS
The Polish hydrogen strategy and Poland’s 2040 Energy Policy are being drafted by the Ministry of Climate. The second document will determine […]
More