Will the Suez Canal blockade impact oil and gas prices in Poland? (ANALYSIS) 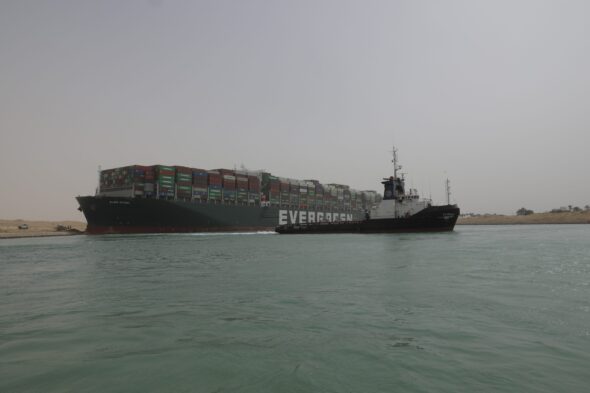 The Suez Canal has been clogged since the 23rd of March. Will the blockade cause issues with the delivery of energy resources, and thus undermine Polish home budgets? Only if it lasts for a long time, which seems unlikely – writes Wojciech Jakóbik, editor in chief at BiznesAlert.pl.

The Suez Canal is an artificial waterway opened in Egypt in 1869 that connects the Mediterranean and the Red Sea, shortening the time of travel from the Persian Gulf to Europe by about nine thousand kilometers, which is up to ten days at sea. The reasons behind the recent incident are unknown. However, we do know that on the 23rd of March a cargo ship Ever Given run aground on the canal’s bank blocking the passage. According to the canal authority, this happened either due to a sand storm or human error. It locked over 300 ships in an almost 100-km long queue, causing delays in delivering many goods, including oil. However, it’s been since announced Ever Given would be freed at the beginning of the last week of March 2021. On the 28th of March, new tugs were arriving to help free the ship, dig it out of the sand and lower its tonnage.

Oil barrels and gas from the Middle East that were travelling to the Old Continent still constitute an important share of deliveries to Europe. In 2020 the European Union imported 6.3 percent of natural gas from Qatar. To compare, it imported 44.7 percent of gas from Russia. Last year the EU imported 8.5 percent of oil from Iraq and 7.1 percent from Saudi Arabia. To compare, it got 28 percent of oil from Russia. Therefore, it is worth to first investigate whether the blocked Suez Canal impacted the prices of energy sources such as oil and gas.

In the first week, the accident did not impact the oil price, which… went down due to the grim economic data, which indicated the economic slowdown would continue due to the coronavirus pandemic, and despite the ongoing vaccination efforts across the world. The International Energy Agency announced the demand for oil would go back to the level from before the pandemic as late as in 2023. On the day of this announcement Brent lost over 8 percent and the US blend WTI – about 10 percent. It was the biggest slump since the second wave of the coronavirus that had occurred around October of 2020. It’s also a signal that the third wave continues to impact the market in line with the forecast of BiznesAlert.pl, a development which shatters the optimism of investors. The wave is responsible for the sliding of Brent since 18 March, and its impact was exacerbated by new lockdowns imposed during the Easter holidays in the West. Brent that up until the first week of March had been priced at over USD 70 per barrel dipped to USD 62 in the third week of that month. Another drop, to about USD 60, was caused by the news about new lockdowns in EU states introduced due to the increasing numbers of COVID cases.

Impact of the blockade on the oil and gas market

On the news of the blockade, the Brent price rose to nearly USD 64 on the 25th of March, but it dipped on the same day to almost USD 61. This is how the uncertainty about this incident shared by investors was reflected in the price. If the issue had been quickly dealt with, its impact on the oil market would have disappeared quickly, and the oil price would have gone back to normal. However, when it turned out it would be impossible to refloat the ship quickly, the Brent started to go up again on the 26th of March. Investors started to worry that the Ever Given incident would have a long-term impact on oil prices, which they reflected in the barrel price that went up on the 29 March to over USD 64, only to experience a slight dip after the recent news on unclogging the canal. The fate of the barrel will depend on how quickly the passage via the Suez Canal will be made possible. However, there are other factors at play as well, which contribute to the price dropping, such as the coronavirus pandemic’s impact on economic activity. It is worth stressing that the OPEC+ states have the necessary tools to halt the dropping prices, for instance, they may decide to limit oil output again as of April 2021.

The spot price of liquefied gas on the London exchange hovered around GBP 46 after it had plummeted from over GBP 75 for one thermal unit, which was caused by the cold spell in February 2021. The blockade of the Suez Canal forced some LNG tankers to retreat, but the market reacted moderately and priced the gas at GBP 48. It has been suggested that Europe’s dependence on gas from Qatar will cause the prolonging blockade to halt even a million tons of LNG in the Red Sea. However, it is worth reminding, that European customers still have significant gas supply from the US and South Africa at their disposal. They also have long-term contracts with Qatar, according to which the Qatari are responsible for the cargo, removing any delays and paying penalties for not supplying the gas. This is why the diplomatic crisis between Qatar and a coalition led by the Saudi Arabia in 2017 and the resulting blockade of Qatar’s shipping routes did not cause issues on the LNG market.

Poland doesn’t have to be concerned

To sum up, the blockade of the Suez Canal has a limited impact on the price of energy resources – LNG and oil. If it is removed quickly, it should not affect the finances of the Polish people, just like it was in the case of other past crises in the Middle East. It is also worth reminding that the importance of the canal for oil trade is dropping systematically, even though in the 1950s about 1.2 million barrels a day were transported across the channel. Today only a few percent of Europe’s oil imports goes through that passage. In 2019 it was 333.618 million barrels from Iraq and 287.829 million from Saudi Arabia. The array of choice is growing with the traditional supplier – the Russian Federation – leading the way and the emergence of the new tycoon – United States. Poland receives deliveries of the Saudi Light blend via the canal from Saudi Aramco and LNG from Qatar on the basis of a long-term contract between PGNiG and Qatargas. So far there haven’t been any issues with those deliveries. The oil and LNG trade is becoming more global, which means the contracted suppliers can offer an alternative, and if not, clients can find one. So the supply of hydrocarbons to Poland is not at risk because of the blockade of the Suez Canal. This means, Poles will probably not notice whether the Suez events had any impact on the prices at gas stations.

Either way the issue may cease to have any impact on the prices very soon. Inchcape Shipping Services, which is working on freeing the Ever Given has announced it managed to refloat the ship. Soon it will report on the progress on dealing with the traffic jam that formed at the passage. The oil prices started to drop. On the morning of the 29th of March the barrel cost around USD 63.48 after dropping from USD 65 a day earlier.

Polskie LNG offers capacity for the LNG terminal after expansion
GAS LNG
Polskie LNG S.A., the owner and the operator of the President Lech Kaczyński LNG Terminal has launched the 2020 Open Season Procedure for market […]
More