Winter is coming, or how Gazprom is getting ready for Russian frosts 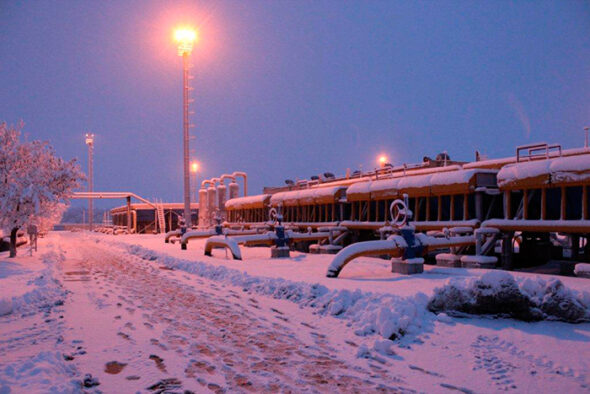 Russia has some of the world’s largest gas storage facilities. Every year Gazprom carries out an intensive process of pumping gas into its underground storage facilities. Even though it is not pumping gas into its European storage, which some claim is caused by the high gas prices on the market, the process is in full swing in Russia, and the goal is to beat last year’s record – writes Mariusz Marszałkowski, editor at BiznesAlert.pl.

Gas, unlike coal or even oil, is not easy to store. Its state of matter, as well as its high explosiveness, require extraordinary storage methods. While coal can be stored in heaps and oil in tanks, car or railway tanks, gas must be pumped into special, underground geological formations.

The most common way of storing gas is to push it into depleted hydrocarbon deposits. It is in such locations that more than 80 percent of the world’s natural gas is stored. However, the process of putting gas into such formations is time- and energy-consuming. Moreover, during one season it is usually possible to carry out only one cycle of pumping the gas our of the storage. Therefore, this type of a warehouse is used to stabilize the gas system, and supports consumption together with the regular supply.

The second most common way of storing gas in the world (accounting for 13 percent of the world’s storage area) is to keep it in aquifers. Storage facilities of this type require higher investment (research, preparation of infrastructure), and operational costs (greater power of gas compressors), but such infrastructure also offers a significant advantage – its efficiency of gas release is much higher than it is in the case of depleted hydrocarbon deposits.

The final out of the most popular ways of storing gas is to keep it in salt caverns, formed as a result of the leaching of salt deposits, which creates room. Compressed gas is pumped into those spaces. Salt caverns are one of the most efficient ways of storing gas. Due to their specificity, it is possible to conduct as many as several collection cycles during one season. Such warehouses, although by volume they are not leaders, are extremely useful in emergency situations, or in case of sudden increases in gas consumption. However, their construction of all types of warehouses is the most expensive, which makes it less popular. In addition, due to the convergence effect, i.e. the movement of tectonic plates, they cannot be exhausted “to zero”, because their storage area would be reduced.

Russia has an extensive system of underground gas storage. This is obvious given the role of this fuel in the country’s energy system, but also because of the surface and climatic conditions of its territory. The specifics of their exploitation when it comes to various users of the underground storage differ. While in Europe gas storage is mainly used to secure the supply of gas to customers during the winter season, in Russia its main role is to stabilise the transmission and production system during the winter. This role is important, because gas deposits do not operate all the time with the same extraction efficiency, and the system operator cannot allow a shortage of gas on the domestic market (annual gas consumption in Russia exceeds 480 billion cubic meters) or disruptions in gas supplies to foreign markets. Underground gas storage is an integral part of the Unified Gas Supply System (UGSS), the world’s longest gas pipeline network, which transmits gas to customers in a large area of Russia.

This year the Russians started the gas pumping season strong. In Russia, of course. Due to the cold winter in the 2020/21 season, almost 61 bcm of Russia’s stored gas were used up, which now need to be replenished. This year, the goal is to pump in 72,638 bcm of gas by 1 of November. In September, 330 million cubic meters of gas on average were pumped into storage on a daily basis. This accounted for about a quarter of Gazprom’s daily gas production (about 1.4 billion cubic meters daily). To compare, at the same time, an average volume of 288 million cubic meters of gas were delivered to gas storage facilities in all of Europe.

Gazprom, unlike European gas storage operators, does not inform daily about its storage levels. In the last report of June 30, the company revealed that the 25.3 bcm of gas were stored. This firm is preparing for the coming winter, which according to weather reports may be comparable in its severity to last year’s season. This action also undermines the claim, made by some, that Gazprom is not filling up its European storage facilities, because of the high market price. If this were indeed the case, and filling gas depots in a situation of such high gas prices would not be beneficial, Gazprom would transmit the entire available volume abroad for sale. However, this did not happen, Gazprom is consistently filling up its warehouses in Russia, while at the same time drying up warehouses in Europe.

Vitrenko: Gazprom is the last barrier for changes in Ukraine
GAS
The chief commercial director of the Ukrainian Naftogaz Yuri Vitrenko describes the process of making his country independent from gas supplies from […]
More