Wiśniewski: Electric cars will dominate the future. Hydrogen will be a supplement (INTERVIEW) 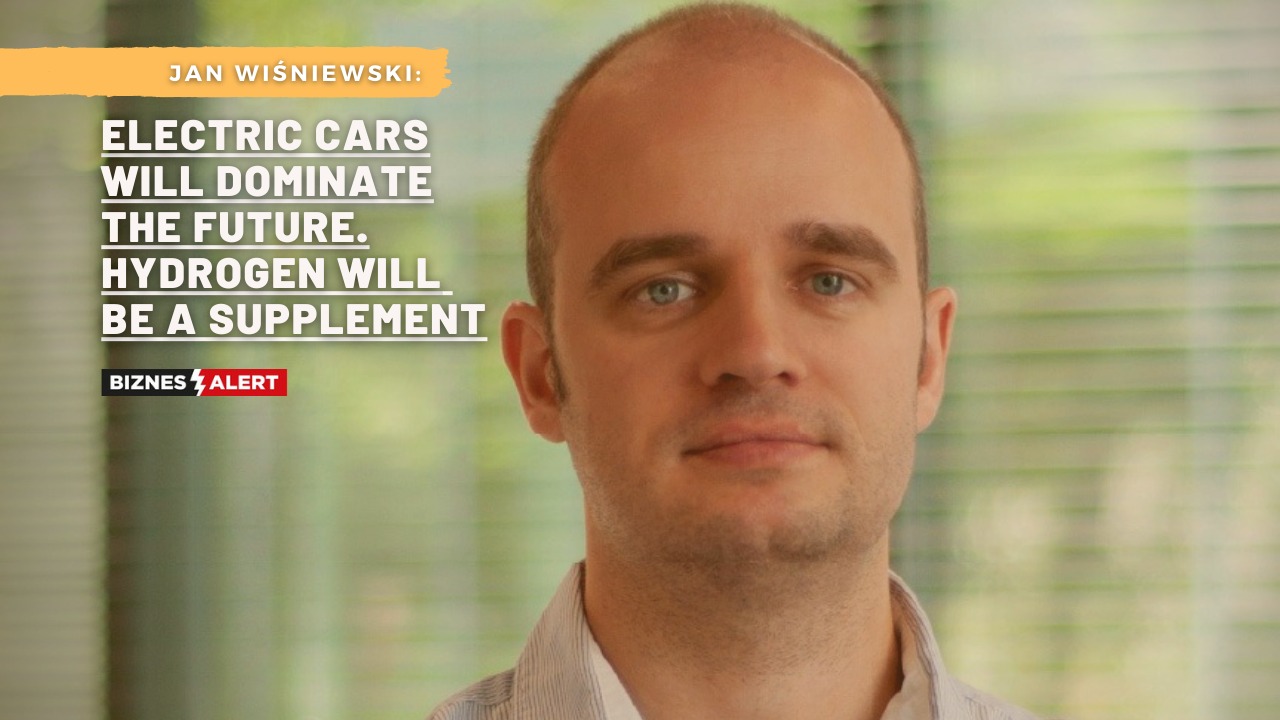 In the coming years, fully electric cars will dominate the passenger car market, whereas vehicles that run on hydrogen fuel cells may complete the picture especially in the road transport sector – Jan Wiśniewski, expert at the Polish Alternative Fuels Association, says in an interview with BiznesAlert.pl.

BiznesAlert.pl: Will the electric and hydrogen drive complement each other on the market, or will they compete?

Jan Wiśniewski: We should start with the basic issue: both electric cars (BEV) and hydrogen cars (FCEV) run on electric engines and are part of the e-mobility system. However, the difference between them is the source of power – the former runs on lithium-ion batteries, whereas the latter on fuel cells. To be precise, hydrogen cars are also often equipped with batteries where excess energy can be stored. In the coming years, fully electric cars will dominate the passenger car market, whereas vehicles that run on hydrogen fuel cells may complete the picture, especially in the road transport sector.

How do e-cars compare to hydrogen cars with regard to the amount of emissions they generate both during production as well as exploitation?

Cars that run on fuel cells are still a market niche, which is why the amount of emissions they generate throughout their entire life cycle has not been investigated as much as it has been in the case of e-cars. When it comes to BEVs, such tests have been conducted by both non-governmental organizations (including the ICCT and Transport & Environment), as well as motor companies themselves. Internal-combustion-engine vehicles were used as the benchmark. The research has clearly confirmed the ecological advantage of electric cars. For instance, according to the latest report by the ICCT, when all stages are taken into consideration – acquisition of the raw materials, production, exploitation, recycling – e-cars make it possible to lower GHG emissions by 66-69 percent in Europe and by 19-34 percent in India. Of course, during usage the rate of the carbon footprint generated by BEVs and FCEVs heavily depends on the way the electricity and hydrogen are procured. If they are generated from renewable energy sources the indirect CO2 emissions drop to zero during exploitation in both cases.

While, especially in western Europe, the e-car charging stations network is growing rapidly, the hydrogen network is still in its infancy. What would have to happen to speed up its growth?

How will e-cars prices compare to hydrogen vehicles in a similar class in the future?

Currently the only hydrogen model available on our market costs at least PLN 300 thousand. For this price the car offers a range of about 650 km, 180 horsepower and acceleration from 0 to 100 km/h in about 9 seconds. At the same time, for PLN 250 thousand we can purchase a BEV with a 610 range, 294 horsepower and acceleration from 0 to 100 km/h within 6.2 seconds. We will pay PLN 180 thousand for a model with a 550-km range, and a 0-100 time of 7.9 seconds, and horsepower of 204. On the whole, e-cars are the cheaper option on the market and will maintain their price advantage at least until 2025.

What is the biggest advantage and disadvantage of hydrogen cars in comparison to e-cars?

FCEV’s biggest advantage is that it takes less time to refuel them. Fuelling a hydrogen car may take up to a few minutes, whereas charging an electric car, with a similar range via a rapid DC charger, up to 80 percent of the battery’s capacity, will take about half an hour. However, one needs to bear in mind that the charging time for BEVs has been systematically dropping as the car generations change. The range is also increasing, the truth is that for the price of a hydrogen car we can buy e-models that will cover a similar distance after one charging. Advantages of e-cars also include a lot bigger array of choice when it comes to models, lower prices, infrastructure that is exponentially wider, the possibility to charge them at home, a less complicated construction and a lot better efficiency of the drivetrain.

Nowakowski: Poland may be a battery powerhouse (INTERVIEW)
Energy Infrastructure / Innovations
There are already three electric car battery factories in Poland, and it looks like another one will find its way here as well: one of the six that […]
More

Between electromobility and oil sales
Infrastructure / Innovations
On August 9, the consolidated financial results of the Lotos Capital Group were presented in Warsaw. You can say that it is good and it will be even […]
More

Šefčovič: Electromobility is a return to our roots. Poland can be its leader
Infrastructure / Innovations
The PKEE E-mobility Summer Day is on in Brussels. The event is to promote Poland’s power sector in the European Union. This year’s theme is the […]
More

PSPA: Bus Revolution
Infrastructure / Innovations
3,5 thousand new buses for alternative fuels are to go to the streets of Polish cities in the next 10 years. Currently, there are about 90 electric […]
More