Without funding, the energy transition will be just a buzzword (REPORT) 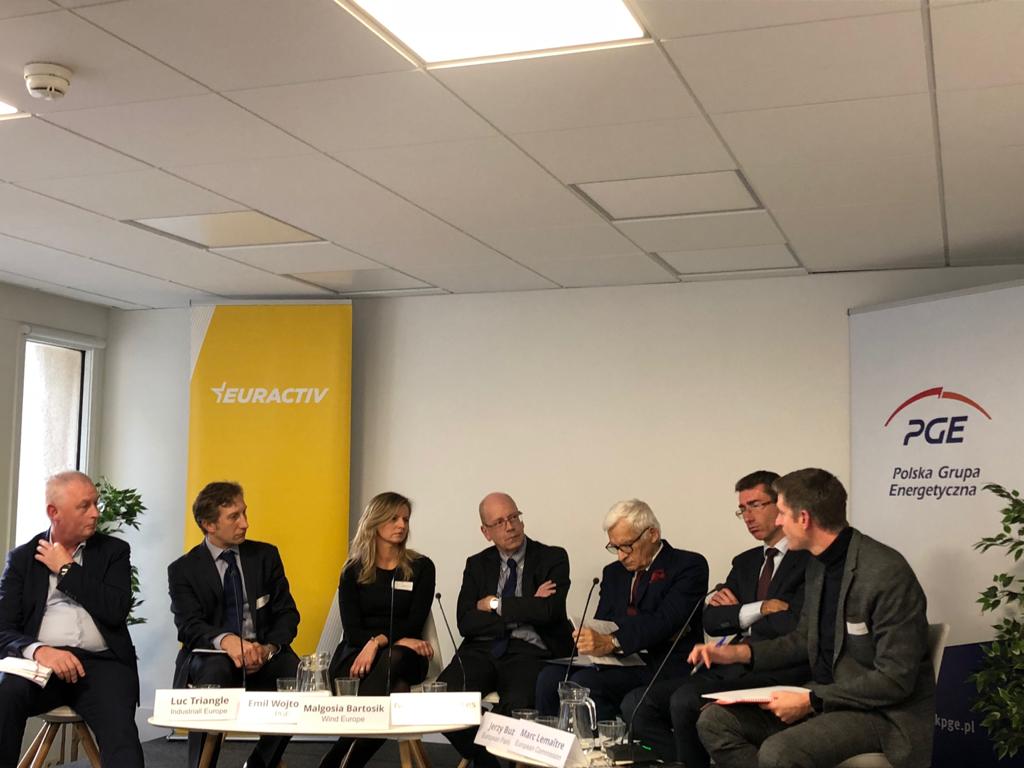 “Financing the energy transition” was the topic of another debate organised in Brussels by PGE Polska Grupa Energetyczna. The panel guests have agreed that one of the tools for supporting the decarbonisation, the Just Transition Fund (JTF), should be significantly boosted if it is not to remain just a buzzword. The example of transition in Poland was PGE Polska Grupa Energetyczna.

Several dozens of representatives of the European Commission, the European Parliament, business and nongovernmental organisations held a discussion at a key moment just before the next week’s announcement by the EC of the “European Green Deal” and the summit of the European Council to discuss the European Union’s 2050 climate goals. Brussels estimates that just reaching these goals for 2030 will require annual investments amounting to around EUR 180 billion in the whole of EU.

The new President of the European Commission, Ursula von der Leyen said that she intends to make climate and the environment top priorities in all EU policy areas. She has also has pledged to strengthen the EU’s short-term goal concerning greenhouse-gas emissions reduction. Initially, the reduction was to be 40 percent by 2030. This goal was increased to 50 percent reduction of CO2 emissions relative to 1990 levels. Her commitment is to make Europe the first climate-neutral continent in the world. Von der Leyen has pledged to unlock EUR 1 trillion for climate investment over the next decade and to turn parts of the European Investment Bank into a dedicated climate bank, which would channel private investment to climate and clean-energy projects “in every corner of the EU”. In addition, the European Commission’s proposed Multiannual Financial Framework for 2021–2027, would raise funding for climate change efforts to 25 percent of the total budget, from 20 percent over 2014-2020.

PGE on the road to change

Emil Wojtowicz, Vice-President of PGE Polska Grupa Energetyczna for Finance has stressed that the PGE, the biggest Polish power utility, follows the energy transition road. “We are developing offshore wind farms. By 2030 we want to have ca. 2,5 GW. We are also developing photovoltaics,” he pointed out. He has stressed that a dedicated Just Transition Fund should recognise the different starting points of the energy transition and be a separate financial instrument. It should be independent of the Cohesion Fund. “At least 80 percent of resources from this fund should be directed to the mining regions that have to face the biggest challenges of the transition. An example here is the Bełchatów power plant with an installed capacity of 5.1 GW. In future, it is to be the site of development of photovoltaics, with this stage commencing with an investment in 60 MW. The installation is to be commissioned in 2022,” he said. He added that the photovoltaics may be supported with the wind in nearby wind power plants, such as the Kamieńsk Mountain and in the future the Szczerców Mountain with an additional 70 MW capacity. He stressed that the goal of the climate neutrality is zero-emissions, but preserving the system security of supply may not be overlooked.

Emil Wojtowicz was stressing that we have to ensure adequate financial support to achieve the transition to a climate-neutral economy. “This is particularly visible in the case of highly coal-reliant Member States,” he stressed. In this context the Just Transition Fund established in the new multiannual EU budget is – in his opinion – a step in the right direction. “However, the money available to the Fund must be significantly bigger than the EUR 5 billion in new funds for the entire EU, as proposed recently. This amount is marginal compared to the financial needs of the energy transition,” pointed out Emil Wojtowicz.

By 2030, the PGE will earmark EUR 13 billion for decarbonisation

Experts estimate that just for the Polish energy sector alone the required spend is even up to EUR 210 billion by 2050.

The representative of the PGE has stressed at the conference that “new financial resources” are required for a just energy transition. “These may not come from a reallocation of resources from other EU funds, such as the European Regional Development Fund or the Cohesion Fund, as this would mean a reduction in these funds available to the Member States. In addition, the Just Transition Found resources should be earmarked for specific projects of transforming coal-fired power plants towards the RES, for instance at the Bełchatów power plant,” stressed Emil Wojtowicz.

The Vice-President of the PGE has reminded that by 2030 his company wishes to commission its first offshore wind farms, significantly grow the photovoltaics programme and build new gas-fired generating units at the Dolna Odra power plant. Only these three projects that explicitly support the Union’s decarbonisation goal will cost us around EUR 13 billion,” continued Emil Wojtowicz.

A Just Transition Fund – but for whom?

Marc Lemaitre of the European Commission’s Directorate-General for Regional and Urban Policy has stressed that the new Commission has no detailed information yet about the European Green Deal policy. “However, the Commission does not want to waste any time and already next week will present more details concerning the EU climate policy,” he said. The private sector has a lot to do concerning energy financing, also with preferential loans. “In the 2021-2027 perspective, we want to centralise the cohesion policies. We already have the tools available, such as the Modernisation Fund and the Innovation Fund that will help to implement the energy transition. Regardless of the magnitude of funds, we have to concentrate them where they are really needed. This will require determining the regions that really need support,” he stressed.

The project should be addressed to these populations that will lose the most with the transformation, such as jobs, a coal extracting region or west regions in Greece. The government in Athens wants to close down mines and coal-fired power stations by 2030. We have to consider how to help them out. New jobs are needed. We can assist the employees in retraining and support new energy generation in these regions.

During the debate, Małgorzata Bartosik, Vice-President of WindEurope, has presented a joint document with three other European associations: Eurelectric, EuropeOn, and Avere, which calls on the European Commission to increase the Just Transition Fund. The publication stresses that only such a financial decision may have a true impact on the energy transition. The European organisations have also pointed to the fact that the JTF priority direction should be the transition of coal regions towards the growth of the RES.

According to Małgorzata Bartosik, it is the wind that steps forward to the energy transition, as the jobs disappearing due to coal discontinuation may be recreated in new areas of the energy sector, such as wind power. “We are appealing for the increase in the resources needed for the Just Transition Fund. We are also appealing for a transition in spending to make sure that funds are actually going where they are needed. We believe that it is possible to combine the mining regions with the new technologies,” she noted. “Poland sees the need for the transition as is demonstrated by one of the biggest RES auctions that will be held already this year,” she added.

Norbert Schultes of the Permanent Representation of Germany to the EU, Head of the Economic Affairs and Energy Department, said that Germany has a plan to close down the mining regions. “Already now we have 40 percent of energy from the RES. We are operating under the Just Transition Fund. We want to discontinue [coal] in the coming 20 years. We have a plan and a roadmap to reach this goal, also thanks to this Fund,” he said.

Five billion euro is a drop in the ocean

Professor Jerzy Buzek of ITRE Committee said that during his work during the previous term of the European Parliament, a fund for mining regions was developed. “We have created the platform but not provided funds for its realisation. Ultimately five billion euro was arranged for this fund. Now, however, we are talking with the new Commission and these five billion is next to nothing. We have 14 regions in need of support from the EU. The decision by EIB to discontinue financing gas investments horrified me. I was not in support of establishing a Green Bank based on the EIB but a Transition Bank. We must remember what happened in France. The Yellow Vests’ protests or protests against energy price increases in Bulgaria,” he warned.

Luc Triangle, General Secretary, Industraill Europe, underlined that a conviction is necessary that the energy transition is not just a catchphrase but a real measure. “Some jobs are disappearing, some are created, and some are changing. We have to be sure, however, that discontinuation of coal will be compensated with additional funds for the protection of jobs in these regions but also in other industries. Five billion euro is a drop in the ocean. We need much more funds targeted at the correct targets. Ambitions without funds will continue to be just a buzzword,” he concluded.

Jakóbik: A turning point for Poland’s energy policy? A message from Krynica
Energy
At the Economic Forum in Krynica representatives of the government and state-owned companies are implying they are ready to adopt an energy policy […]
More