Zielińska: the government knows how the EU ETS works, but does nothing to reduce emissions (INTERVIEW) 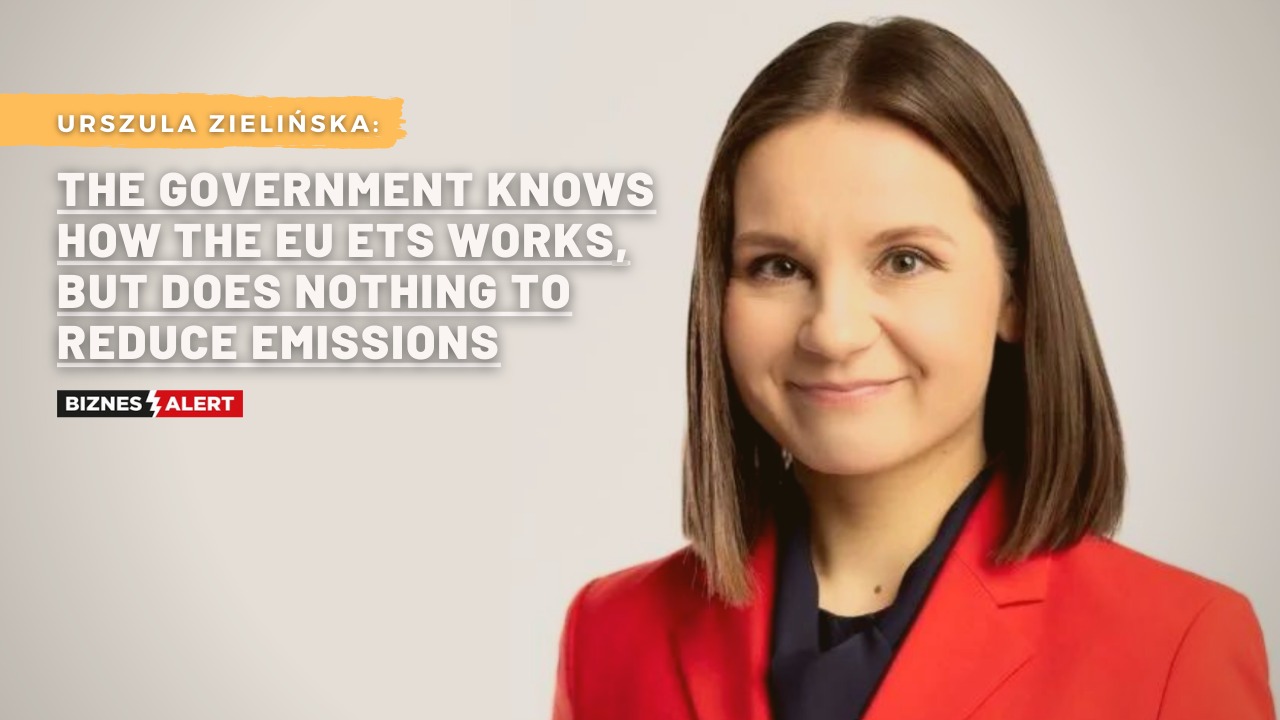 The government, knowing how the EU ETS works, hasn’t done anything to reduce emissions. And when today, mainly because of dependence on fossil fuels, we are faced with rising energy prices, the government says that the climate policy is to blame. It should be made clear that the growing energy prices are caused by the absence of climate policy – says the leader of the Green Party, which is part of the Civic Coalition, Urszula Zielińska in an interview with BiznesAlert.pl.

BiznesAlert.pl: Nuclear energy and gas are likely to be included in the EU taxonomy. What is the Green Party’s position on this?

Urszula Zielińska: We do not support this taxonomy, as Polish and European Greens we believe that this is a road to nowhere, especially in the context of our dependence on gas imports. We cannot depend on Russia, which is putting entire Europe under pressure through gas prices. We should move away from fossil fuels as soon as possible towards renewable energy, new, innovative technologies – instead of the ever more expensive gas, and nuclear energy, which takes a lot of time to build, and is expensive and dangerous. Not this way, not today.

We as the Greens have a clear and certainly more stringent position on this issue than, for example, the Civic Platform. We do not have a common position on this as a the Civic Coalition. However, we agreed that the law aimed at speeding up, contrary to legal rules and in spite of citizens, the process of issuing permits for nuclear power in Poland, is the wrong path. The Civic Coalition voted against this bill in the Sejm.

What do you think the government should do to mitigate the impact of the energy crisis on end users?

I think short term solutions like the VAT reduction may work to an extent. It was also recommended by the European Commissioner for Energy, Kadri Simson late last year. However, in the medium and long term, we need other ideas. We need to implement the climate policy, so that heat and energy bills can be lower. The lowest costs are generated by renewable sources-wind, sun, heat pumps. However, not everyone can afford the initial expense associated with the purchase of, for example, a heat pump, and here the state must act. We should also be much more active in helping to replace pollution-generating furnaces, moving away from gas boilers, refunding and pre-financing photovoltaics, and reversing the recent changes to the PV billing system that will put the brakes on its growth. The state should participate more actively in the costs of thermal modernization for vulnerable consumers, in fact, it should pre–finance the costs of insulating homes. There is a huge need for such measures. All this should be taken care of by the government, but the clean air program until recently subsidised the purchase of coal furnaces, and still subsidises the purchase of furnaces that run on either solid or gas fuels. Instead, it should focus on the cleanest and cheapest technologies available.

In the context of the rising energy prices, the government proposes to reform the EU ETS, and says it is a speculative mechanism. Do you agree with that?

I absolutely disagree. This mechanism has been developed for several decades, it is the only effective mechanism for reducing CO2 emissions in Europe, which is necessary to stop the climate catastrophe. Since its inception, the EU ETS has helped to reduce CO2 emissions in the European Union by 24 percent. Among other things, it has enabled Europe to meet its 2020 CO2 reduction target. Prime Minister Mateusz Morawiecki, back in November at COP26 in Glasgow boasted about the achievements of the European Union’s climate policy, which he does not support at home. Today, the prime minister blames the climate policy for the growing energy prices, it is a lie and manipulation. At the same time, this government, knowing how the EU ETS works – that the price of emissions will rise and the number of free allowances will fall, because the point is to motivate change – has done nothing to reduce emissions. And when today, for many reasons, but primarily because of dependence on fossil fuels, we are faced with a spiral of rising energy prices, the government says that the climate policy is to blame. It must be made clear that the rise in energy prices is the result of the absence of climate policy. It’s the government’s fault. Just as the government is to blame for not investing the proceeds from the EU ETS in the energy transition. And these revenues are considerable: PLN 50 billion since the system has gone online, and at least another 100 billion by 2030 for Poland. Most of this money is spent today to cover the losses of high-carbon companies. It’s like the government’s burning this money in a furnace.

As Greens, last Saturday we presented a green plan for rebuilding Poland after the pandemic, which responds to the current problems we are talking about. We have a clear recommendation on the energy path that Poland should follow. An energy mix based on renewables and energy efficiency is real. This is a solution to the problem of energy prices in the short and long term. This is the Green Party’s proposal in the ongoing public debate.