Zielińska: Why invest in gas if we can transition straight to renewables? (INTERVIEW) 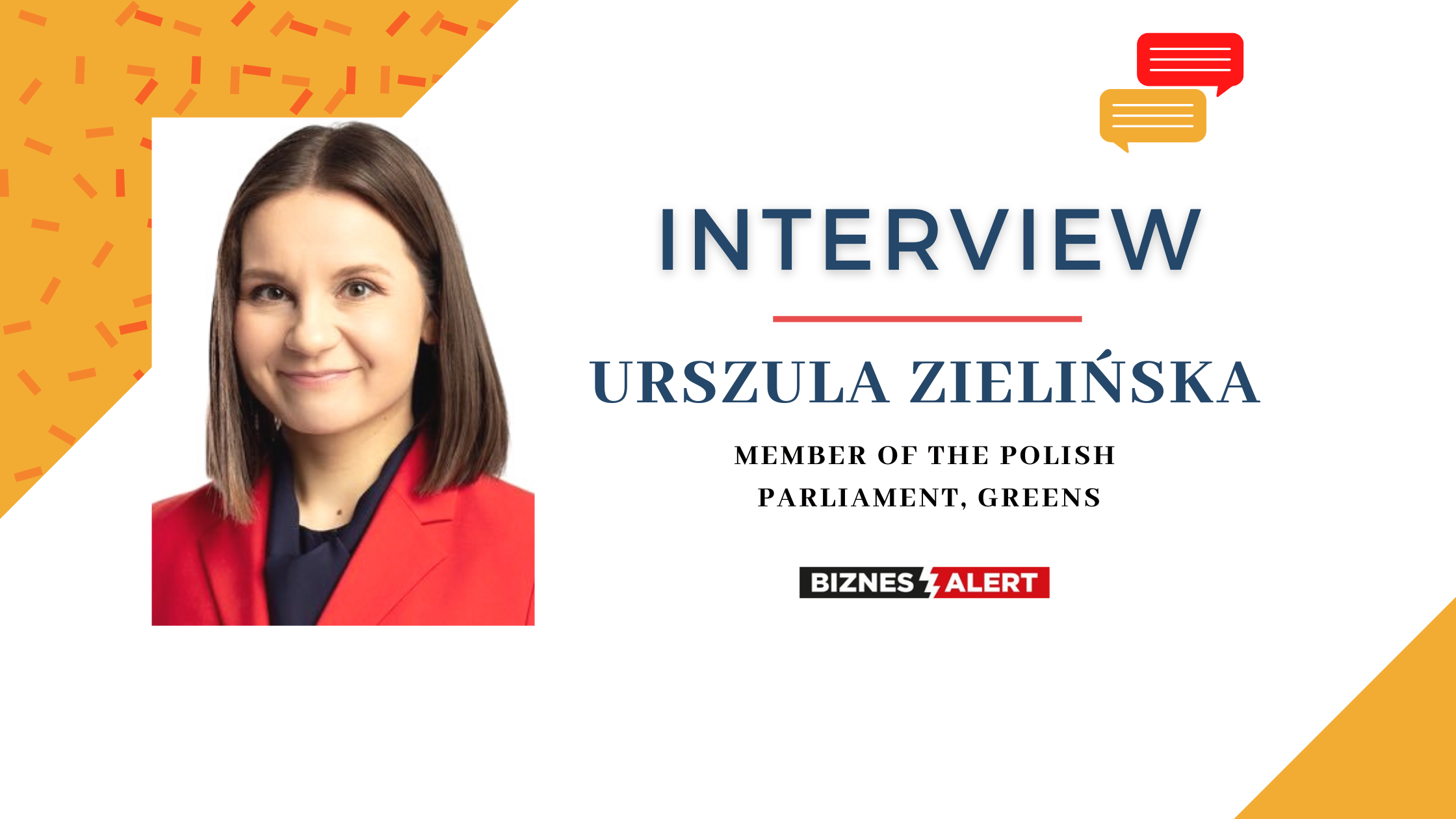 “We are critical of investments in gas. They freeze money that we really need to phase out fossil fuels. The European Union sees this as well and has announced it would stop subsidizing fossil fuels as of 2025. Why then invest in declining technologies and ‘freeze’ our human and financial resources?,” Urszula Zielińska MP from the Green Party asks in an interview with BiznesAlert.pl.

BiznesAlert.pl The European Union announced a specific 55 percent reduction target of GHGs emissions in comparison to 1990 by the end of 2030. In what way is this an opportunity to Poland?

Urszula Zielińska: This is a unique opportunity for our country. We can jump onto a completely new civilizational level. This allows us to use huge funds, which Europe is ready to spend on countries that are behind when it comes to the energy sector. We can modernize our economy, ensure economic growth and development after the pandemic and thoroughly reform our energy market.

Recently during a conference the representatives of the Green Party talked about the ways to limit CO2 emissions by, among others, electrifying transport and changing lighting. Have Poland and the European Union prepared enough money to make these changes possible?

The money Poland will receive, will cover a large majority of the country’s demand for investments related to phasing out coal. Of course, a lot depends on the government’s final plan. Will it decide to invest in renewable energy sources (RES)? Or in nuclear power? Or in gas? That decision will determine whether the money will be enough. We, as the Greens, base our plan for the energy sector on renewables, and we believe that we should not invest in declining technologies, such as nuclear power, fossil fuels, gas.

The estimated costs of the energy transition differ depending on the source, but roughly they are averaged at between EUR 240 bn (the EC’s estimates) and EUR 380 bn (McKinsey’s 2020 report). Whereas, the total amount that the EU will give to Poland as part of the upcoming financial perspective and the Recovery Package is EUR 175 bn in total. This is a huge influx of money for the next 7 years, which may cover a huge majority of our needs.

So, to give a short answer to your question – yes, a significant portion of our needs related to the energy transition will be covered by the EU subsidies. This is a huge opportunity.

We should also not forget about the fact that the Polish economy and private users are already transforming their “own energy sources”. Increasing numbers of companies are announcing their own 2050 emission targets, which means they are much quicker than the government. The citizens are installing PV panels on roofs, isolating buildings and replacing old heat sources with modern ones despite very small subsidies. In the coming decade the market will start departing from coal on its own, and will cover some of the financial demand. So, it is not true that the state and the European Union will have to cover 100 percent of the costs of the coal phase out. However, both the EU and the government will have to make sure that the money goes first and foremost to mining regions and households at risk of poverty, those that cannot afford to insulate their houses or replace the old pollution-generating furnaces today.

Poland wants the European Commission to recognize gas as a transition fuel, whereas Poland’s 2040 Energy Strategy says nuclear power will be used to stabilize the power system. The Greens in Germany are completely opposed to nuclear energy. What is the position of the Green Party on the those two energy sources?

Looking at the different models of phasing out coal, we can see that technology is at such a stage of development that we do not have to get bogged down for the next 3-4 decades in fossil fuels such as gas, or high-cost and high-risk technologies such as nuclear power. As the Polish Greens, we maintain our position that the 2050 plan should be based on renewable energy sources. This is in line with the stance of many Polish scientists, professionals in the energy sector and specialists who are pointing to a number of stable models based on renewables, which do not have any mix of gas or nuclear power at all. They confirm that we do not need any transition models.

Since you are against recognizing gas as a transition fuel, what is your position on investments such as the expansion of the LNG terminal in Świnoujście or the Baltic Pipe?

We are critical of those investments and of Nord Stream 2 as well. They freeze money that we really need to phase out fossil fuels. The European Union sees this as well and has announced it would stop subsidizing fossil fuels as of 2025. Why then invest in declining technologies and ‘freeze’ our human and financial resources?,” They are still very limited, so we need to invest wisely. We will either invest in gas, which the EU will stop subsidizing, or we will invest in nuclear power, which is extremely expensive to build and use, or we will invest in renewable sources. We cannot afford to invest in nuclear power, new LNG terminals, wind power and PV panels all at the same time. We won’t be able to do all of that simultaneously. This is why we should bankroll a technology with the most promising future, which is low-emission, eco-friendly and cheap and that is renewable energy.

Let me give you an example. Within a few years in Poland we installed 3 GW of solar power with about PLN 1 bn subsidies from the state-run program “Mój prąd” (My electricity), and the rest are private investments with a return rate of about 6 years. Whereas the British nuclear power plant Hinkley Point C with a similar installed capacity (3.2 GW) has been in construction for 15 years, and the estimated cost, which needs to be guaranteed by the state, is over PLN 110 bn. The Hinkley Point C’s final product – nuclear power – will be twice as expensive as solar or wind power from Great Britain. This shows the extent of costs of nuclear power and how competitive renewable energy is today. This example alone shows that the plan to invest in declining technologies is very bad economically. Not to mention its impact on the environment.

Do you have ideas on how to develop hydrogen technologies in Poland?

We are for developing green hydrogen in line with the European climate policy. This is a different approach than then one proposed by the Polish government, which wants to develop “grey” hydrogen, which is based on coal. We support hydrogen technologies that are based on clean, green and low-emission energy sources. All the more that those are the technologies, which will receive EU support, not the “grey” ones.

How do you want to communicate your platform to the public? During the last campaign in the United States, the problem of climate change ranked 11th on the list of priorities for US voters (despite the fires in California). How does the Green Party want to convince voters?

An example? It is said that the coal phase-out will wipe out 70 thousand jobs in the coal sector. That is true, but for every coal-related job there are between 4 and 7 jobs in the green industry and services – in insulation, transport, digitization, etc. Already today, there are companies on the Polish market, which are developing green technologies and are offering salaries at twice the level of the national average, but cannot find employees. So, first the transition is an opportunity to develop new job markets and stimulate growth after the pandemic. Second, it’s also about clean air we have been dreaming about for decades, and about 50 thousand people who will not die prematurely. Third, the transition will reduce heating costs and alleviate poverty thanks to building insulation and heating source replacement. Fourth, we will have better agricultural crops, because climate policy will also deal with droughts and the loss of biodiversity. Fifth, the level of energy security will improve, because we will no longer depend on cheap coal from Russia, or imported gas. We will produce power from Polish sun, wind and biogas. There are many benefits and there is enough money. So now, we only have to connect these plans and go through with everything we should have been doing in the past decades, but which never happened. This is what we want to talk about and what we want to inspire.