Baby steps, or how Germany is arming Ukraine 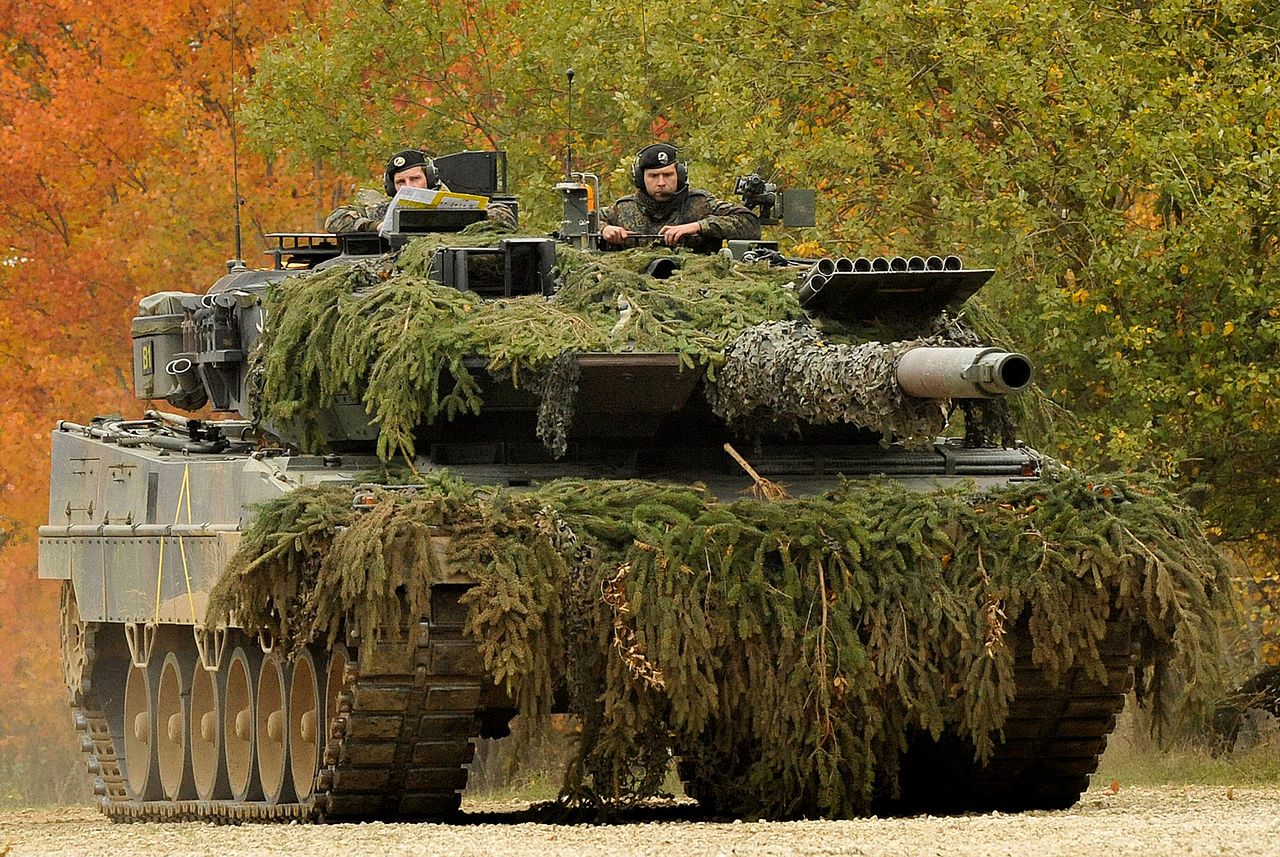 When it comes the German military assistance to Kyiv in the face of the Russian invasion, the infamous five thousand helmets have been engraved in public memory. Berlin’s resistance to sending more weapons to Ukraine caused considerable controversy among other NATO members, and the arguments of Olaf Scholz’s cabinet have been met with criticism even from his own coalition partners. However, it seems that long-term pressure has had an effect – writes Michał Perzyński, editor at BiznesAlert.pl.

From the first days of the Russian invasion of Ukraine, Germany has been accused of delaying the supply of weapons to Kyiv. Initially, when Russian troops were gathering on the borders of Ukraine, Berlin argued that due to the experience of both world wars and the policy of not engaging in armed conflicts, it would not send military equipment to Ukraine. In addition, Germany’s Social Democrats have for decades pursued a lenient policy towards Russia, a radical example of which is the former chancellor Gerhard Schröder. Of course, Olaf Scholz is far from it, but he did not break from the tradition of seeking ties with Moscow instead of adopting a more assertive attitude. His government has made various arguments for resisting pressure to increase arms supplies to Ukraine, including the claim that such actions could lead to world war III and that Ukrainian troops would need training to operate modern weapons. Commentators, however, often pointed out a certain hypocrisy; the Germans initially claimed that they could not send any of their Marder infantry fighting vehicles, but later made a deal to send them to Slovenia so that the country could send its own Soviet-era tanks to Ukraine. Berlin has struck a similar deal with Poland and the Czech Republic as part of an exchange scheme aimed at delivering tanks to Ukrainian forces more quickly, but these efforts have largely stalled.

This delay significantly cooled German-Ukrainian relations, the most striking example of which was the German President Frank-Walter Steinmeier not receiving an invite to Kyiv. Representatives of the Ukrainian government continue to publicly call for Germany to take swifter action. “The Germans must understand that the timetable for the end of the war depends on their attitude. The sooner we get these or other weapons from Germany, the sooner Germany finally breaks this sense of closeness with Russia, the sooner the war will end, ” Mykhailo Podolak, a top adviser to Ukrainian President Volodymyr Zelensky, said in an interview with The Washington Post. He stressed that Ukraine, asks mostly for armored vehicles and tanks that will accelerate the counteroffensive and ultimately tilt the scales of victory to its side. However, back in September, Germany refused to comply with this request, stressing that it was coordinating its response to this appeal with its allies. “So far no country has supplied armored vehicles for the infantry built in the West or its own tanks. We have agreed with our partners that Germany will not take such actions unilaterally,” the German Defense minister Christine Lambrecht said.

At this point, it is worth recalling once again that Poland and the Czech Republic sent several hundred Soviet-era T-72 tanks to Ukraine, and Germany promised to replenish their stocks with their own machines. There is now no doubt that Ukraine could use more modern equipment, even if it required further training. Back in April, Berlin announced that it had agreed to send its self-propelled anti-aircraft guns to Ukraine, so far 24 have been delivered. However, Berlin still doesn’t want to give Ukraine the made in Germany Leopard 2 tanks.

The attitude of the federal government under the leadership of the Social Democrats may have seemed unyielding, but it turned out that baby steps and constant pressure from outside are having an impact, especially since they are accompanied by pressure on the domestic political scene – the Greens, the Liberals from the FDP and the Christian democat from the CDU/CSU openly demand an increase in the supply of weapons. “Everyone in the government knows that it would be possible to send more weapons to Ukraine,” said prominent Green politician Omid Nouripour, stressing that Germany must help Ukraine “liberate as much of its own country as possible before winter comes”, and advocated for more supplies from the Bundeswehr and industry. Defense Minister Christine Lambrecht of the SPD rejected these arguments, citing the weakness and underfunding of the Bundeswehr. “I have a lot of equipment on paper, but when I look at operational readiness, it looks very different,” she told Politico. Kevin Kühnert, SPD’s general secretary, echoed her claims. “We support the exchange of equipment with our partners from Central and Eastern Europe. Germany also does not want to encourage Russia to act completely irrationally and attack other countries. This is an important aspect of the dispute that must always be taken into account,” he said on RTL television.

However, it seems that it is the Liberals who are in favor of the most decisive actions when it comes to sending military equipment to Ukraine: “I would like the chancellor to change his line. I would like the minister of defence to change her line,” said FDP politician Marie-Agnes Strack-Zimmermann. She stressed that it was necessary to supply infantry fighting vehicles Marder and Leopard 2 tanks. “This is extremely important and should happen immediately,” Strack-Zimmermann said. She appealed to all “who still do not understand that in such a war situation, Ukraine’s successes can be supported only if they now have the weapons they need.” FDP’s expert on defense Marcus Faber made a similar statement earlier and called for the direct delivery of Marders. “Thanks to our tanks, the liberation would have progressed faster and fewer Ukrainians would have had to die,” he told the Bild newspaper. However, most of all, it was the Chairman of the FDP and Finance Minister Christian Lindner who sought additional support for Ukraine from Germany. “We need to see every day if we can do more to help them in this war,” Lindner tweeted. The social democrats who remain in opposition are also chipping in to force the social dems to speed up arms delivery to Ukraine. “The current development of the situation in Ukraine shows that the Russian invasion can be effectively repelled. Berlin must finally give up its grudges and provide more weapons,” said the groupor’s spokesman for defence policy Florian Hahn (CSU). This opinion is shared by CDU politician Norbert Röttgen, also known in Poland for his opposition to the Nord Stream 2 gas pipeline. In an interview with the Bild, he said that Germany should hand over to the Ukrainians tanks from the reserves of the Bundeswehr as soon as possible. “Nowhere else are they currently needed to restore peace,” he said.

Interestingly, the Russian ambassador to Berlin, Sergei Nechayev, also joined the debate, criticizing the previous deliveries of weapons to Ukraine, and setting “red lines” that Berlin should not cross. “The mere delivery of lethal weapons to the Ukrainian regime, which are used not only against Russian soldiers but also against the civilian population in Donbas, is a red line that the German government should not have crossed,” he said, reminding about “Germany’s moral and historical responsibility for the crimes of nazism during World War II.”

But what do the Germans think?

What does the German society think about this problem? A Civey poll conducted in September for T-Online shows that only a small majority of Germans are for the Federal Government supporting Ukraine with tanks in the fight against Russia. Fifty-two percent of respondents answered positively to this question, of which 39 percent answered “completely agree” and 13 percent “somewhat agree.” On the other hand, 40 percent of respondents were against it: 33 percent answered “completely disagree”, and 7 percent “somewhat disagree”. 8% of respondents were undecided. The largest support for sending equipment to Ukrainians was shown by the youngest Germans-62 percent were in favor, 31 percent against, similar results were in the age group of 30-39 years. The least support was among the elderly, but even here supporters of sending weapons to Ukraine had an advantage over opponents by 49 to 43 percent.

It is also interesting to see the distribution of supporters and opponents of sending weapons to the front among the voters of individual parties, and here the greatest enthusiasts of such a policy are the voters of the Greens, of which as many as 80 percent want Germany to send more weapons. Next are the voters of the FDP (59 percent), CDU/CSU (56 percent). Strongly divided on this issue is the electorate of the Social Democrats, but even in this case, supporters have an advantage over opponents 45 to 41 percent. As one can easily guess, voters of traditionally pro-Russian parties in Germany are the most skeptical about such a policy, and 75 percent of supporters of the radical left Die Linke do not wish to send more weapons, while in the case of the radical right – AfD, the figure shoots up to 89 percent. Therefore, it seems that when it comes to sending arms supplies to Ukraine, all political parties in Germany are listening closely to the voice of their supporters.

Pagung: Talks with Putin are a strategy. Scholz is afraid of Russia’s loss (INTERVIEW)
SECURITY
Scholz fears that if Russia loses too harshly this increases the likelihood of nuclear attack by Russia on Ukraine. Putin threatened to do this […]
More

Shagina/Westphal: Gazprom is using geo-economics against Europe. Poland and Ukraine are […]
GAS Nord Stream 2 SECURITY
The situation around Nord Stream 2 is toxic. We are downward spiraling into a security dilemma – states Kirsten Westphal. – Gazprom is […]
More