Guła: Coal is increasingly more expensive and less accessible, so Poles will turn away from it (INTERVIEW) 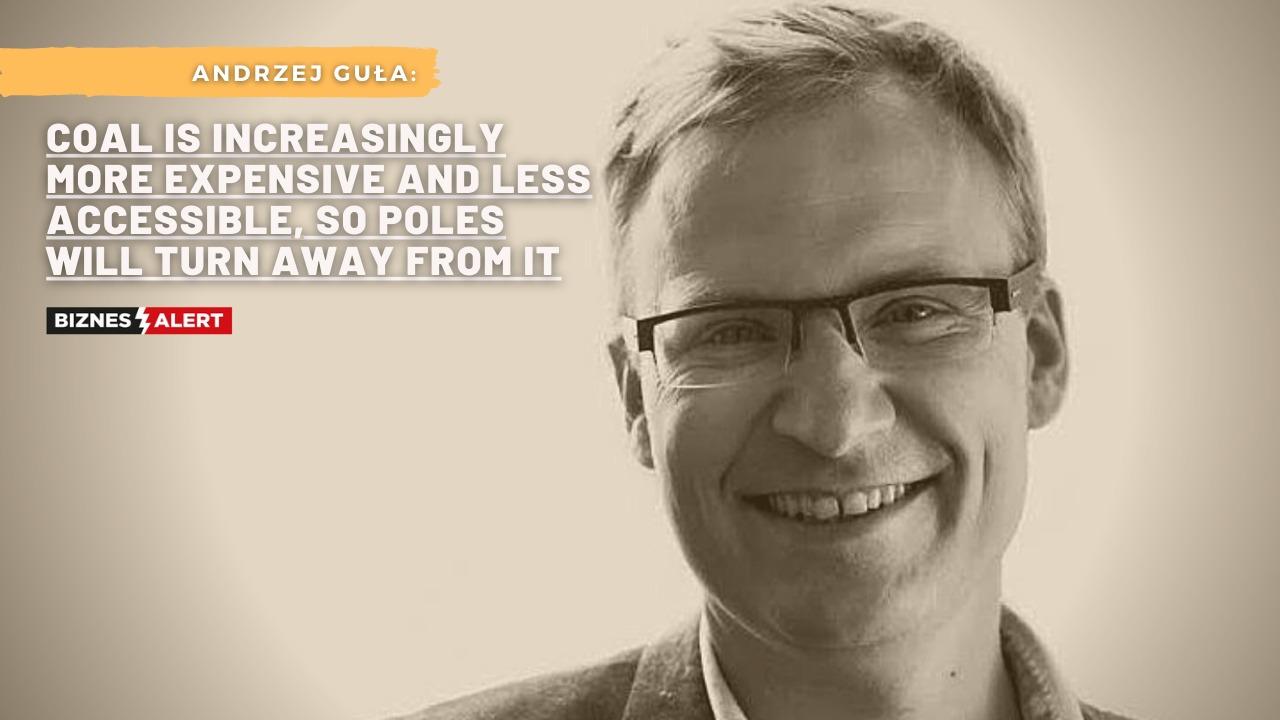 In the Lesser Poland Voivodship an anti-smog resolution will enter into force on the 1st of January 2023. It will make it illegal to use heaters running on solid fuels that do not meet emission requirements. Heating with coal is becoming less available, because the coal that meets the requirements of the so-called “ekoprojekt” is scarce on the Polish market. In the coming years Polish households will be abandoning coal heating in droves – Andrzej Guła, co-founder and leader of the Polish Smog Alert, said in an interview with BiznesAlert.pl.

BiznesAlert.pl: As of the 1st of January 2023 it will not be allowed to heat houses with devices that do not meet emission norms in the Lesser Poland Voivodship. In practice this means it will be necessary to replace the majority of heaters that currently run on solid fuels. Does this mean people will no longer burn coal in the entire Lesser Poland region?

Andrzej Guła: Lesser Poland is not the only region where such regulations have been introduced. Anti-smog resolutions have been already enforced in fourteen voivodships. Such a resolution will enter into force in Silesia on the 1st of January 2022, which is a year before Lesser Poland. These regulations do not ban coal burning, but force the owners to use stoves that meet specific emission standards. However, in the coming years we will be witnessing the phase out of coal from households. This goes along with the recently adopted state energy policy, according to which coal heating will be phased out in municipal areas by 2030 and by 2040 in the countryside.

Will the Clean Air program and emission norms force people to stop heating their homes with coal for economic reasons?

People will stop using coal to heat their houses for various reasons, one being the convenience of not having to maintain a dirty heating room at home, and investing a lot of time to operate the stove. Another issue is that in reality Polish coal mines simply do not have the so-called “ekogroszek” coal, which is used in modern stoves, which means it needs to be imported. The emission norms for heating devices have definitely made using poor quality fuel in a poor quality stoves unacceptable. The process of departing from coal is clearly reflected in our surveys of single house residences – the percentage of houses heated with coal went down from 69 percent in 2014 to 51 percent in 2020.

The Minister of Climate and the Environment Michał Kurtyka announced that as of the 1st of January 2022 the Clean Air program would not subsidize the purchase of coal stoves. Today it is still possible to receive a grant to buy a coal stove, but only in the fifth grade and under certain conditions – if the installation of other sources would be difficult. About 15 percent of the beneficiaries of the program have used this opportunity. What should coal be replaced with?

The decision to stop bankrolling coal with public money was right. The Polish Smog Alert has been calling for this for years. The beneficiaries will have a few options to choose from when deciding on what to replace coal with. The options include gas stoves, which 45 percent of the Clean Air program participants choose, timber biomass stoves (18 percent) and heating pumps (19 percent). This last technology is developing especially rapidly as year on year it grows by 100 percent. Considering the popularity of household PV installations, it may turn out that the heating pumps will soon rank as the most popular option in the Clean Air program.

In the recent weeks the number of applications for replacing stoves and insulating homes has been growing. Every week it hovers above 3300 beneficiaries. However, when we consider cities that have the biggest issues with air quality, e.g. in Silesia, the number of those applications is relatively lower. Why?

The number of applications is increasing systematically and there is a chance that this year it will be over 180 thousand. The target is 300 thousand a year. However, there are clear differences between communes, as in places where the local government supports Clean Air, helps the beneficiaries and advertises anti-smog resolutions, the under-class stoves are replaced quicker. Unfortunately, many communes still do not support Clean Air and create their own “cannibalizing” programs, which cause confusion and disorientation among residents. Still, I will agree with the proposition that the situation in Silesia is the worst. In April 20 percent of all applications as part of the Clean Air program was submitted in the Silesian Voivodship. In that region the number of applications was twice as much as in, e.g. the Mazowieckie and Lesser Poland voivodships. However, it should be also noticed that there are big differences between various communes in Silesia when it comes to the number of applications. To recapitulate – in areas where local authorities are active, the effects are visible.

The Polish Smog Alert, Kraków and 14 adjacent communes joined the 600 Days for Clean Air campaign. What is the campaign about?

It is a joint initiative of the Polish Smog Alert, governments of 14 communes adjacent to Kraków and the city itself with the goal to inform people who have not replaced their under-class stoves yet, that they have less than 600 days to do it. As part of this initiative, once in a quarter, we will inform the public opinion about the progress in getting rid of pollution-generating stoves in and around Kraków. As many as 23 thousand still need to be replaced.

Moreover, together with the Dziennik Polski daily we have launched the so-called Anti-Smog Lesser Poland Voivodship League as part of which we will be monitoring how the fight against smog is going in individual communes.