Lasota: We are facing a crisis and our politicians are running away (INTERVIEW) 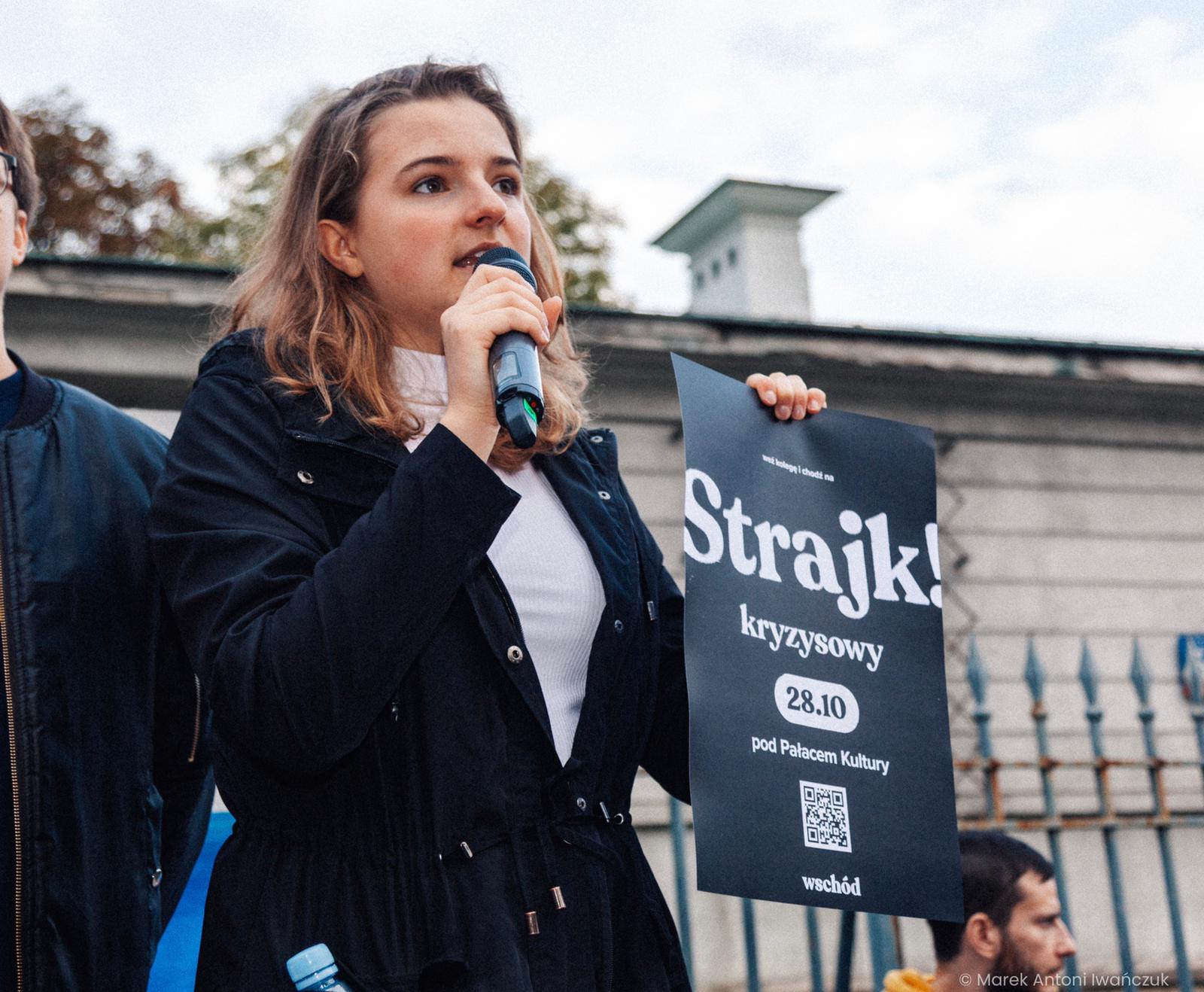 “We are facing a real crisis, and our politicians are running away. Taking to the streets is our only choice. We appealed, we called for unblocking the renewable energy laws, for investing in winterizing houses, for taking the crisis seriously. It’s not working. Hence the need for an emergency strike,” said member of Fridays for Future Dominika Lasota in an interview with BiznesAlert.pl.

BiznesAlert.pl: You are organizing an emergency strike on 28 October. Why are you taking to the streets?

Dominika Lasota: The emergency strike is a new opening for us. We are doing this as the “East” initiative, a new voice on the scene, not only for climate, but also for social movements in Poland. We are organizing this strike because we see that the situation is critical. Despite months of waiting for concrete political measures that would save people from the energy crisis, we see that the government has spent the last few months not taking the crisis seriously and pushing responsibility for the de facto years of energy neglect onto various actors. We hear that people don’t have money, can’t buy fuel for the winter and that the prices are exorbitant. At the same time, the prices have been persistently high, which, to a large extent, stems from dependence on fossil fuels and their high prices on the market. We are facing the reality of the crisis and our politicians are running away. Taking to the streets is our only choice. We appealed, we called for unblocking the renewable energy laws, for investing in winterizing houses, for taking the crisis seriously. It’s not working. Hence the need for an emergency strike.

What would be the right “recipe” for the climate crisis?

I don’t have a plan for a just transition for Poland, and I don’t think anyone has such a plan. But there are some basic steps, some foundations of this transformation, which, unfortunately, the Polish government is not investing in. It is illogical and absurd for me that despite months of war and signals of Putin’s energy blackmail against the whole of Europe, the government continues to block the RES sector. The fact that the 10H law has been put on hold by Elżbieta Witek, the Sejm Speaker, is absurd. We need all kinds of energy right now, and blocking a sector that’s ready to work is ridiculous.

It is paramount to finally implement the law, and then, at least, enforce acts on prosumers, or those on developing the PV sector. There are a number of laws that could realistically accelerate a just transition in our country, but they are not being processed. Potentially the biggest weapon we have against Putin and other dictators is to increase the extraction of power from clean energy. In the European Union, there is an idea called “solar rooftop initiative”, which proposes solar panels on all public buildings. Of course, this will not happen in a week, it will be a process and this step alone will not be enough – but it would be a good start. The direction of the government must finally change – from blocking RES to developing them.

On the other hand, we need to hold accountable the energy companies that have pushed us into these crises and continue to do so. Under no circumstances should the energy companies be allowed to make a fortune from the crisis, and this is happening at this moment with the consent of the government. One of the solutions would be to introduce a windfall tax, i.e. a tax on additional profits of energy companies, but in Poland there is a dispute over this, because the Minister of State Assets does not want to tax companies where his political friends are. However, one of the energy companies has admitted publicly that the current situation is profitable.

Why is this happening?

I am asking myself this question almost every day. There is no longer any doubt that Europe’s dependence – including Poland’s – on fossil fuels is financing the Russian invasion of Ukraine, which is destabilizing life not only in Ukraine but across the continent. At the same time, it is also our dependence on fossil fuels and our national addiction to coal that has made the current energy crisis so severe. It would seem reasonable that politicians should do everything to move away from the fossil fuel industry. But looking at the Polish government, I get the impression that we are dealing with politicians from the stone age. This approach is extremely dangerous and runs counter to what is needed to keep people safe. I think what we consider radical takes on a new meaning. From my perspective, following the words of the UN Secretary General, it is radical to invest in gas or stick to coal. And it continues to happen, because the government benefits politically and personally. It is no coincidence that in many countries – including Poland – the fossil fuel industry and governments are friendly with each other. This is visible in the history of the “club of millionaires”, which the Polish government created with fossil fuels companies. This sector is a source of huge influence, so it seems that the government wants to protect its interests, doing it at the expense of our wallets, the heat in winter, and at the expense of the citizens of Ukraine.

An IBRIS poll shows that 60 percent of Poles want renewables to be developed urgently, while the government is planning a long-term nuclear project. Is nuclear energy necessary for successful and efficient diversification?

We are one of those economies in the global north that needs a lot of energy. It seems that the atom can partially respond to this demand, but the obstacle is that it is not a solution that responds to the urgency of the crisis in which we find ourselves. A solution that we can implement in 10 years is not the answer. The energy crisis, the climate crisis and the current war require solutions here and now. I see solutions in clean energy, which is available here and now. It could save us, literally, in months. The atom may help us, but only if it is actually built and if we have money to pay for it. For now, however, it is a tale of the future, because we are talking about a perspective of 10 or 15 years. I do not know if we will live to see these 15 years, because there is a war going on abroad, which if not stopped, if we do not cut off funding for Putin, then who knows how it will progress. The current crisis requires extraordinary measures and urgent action. I see solutions in renewable energy, which is the cheapest energy on the market, but also the energy of people. In the Kuyavia region, where I come from, despite government blockades, people are finding all kinds of ways to build solar power plants – from parishes, schools, to soldiers. It is these solutions that should be supported as much as possible at this time.

What solution, in such a situation, could bring us real benefits?

If people, for example, winterize their homes, the benefits will be visible immediately. A just transition can bring a lot of good in a short time – but the issue is scale. There is a boom on heat pumps in Poland. People see that they can do it on their own and within their own backyard, free themselves from dictatorships and crises, ensuring their security. Not without reason, the Minister of Climate and Environment boasted in July about photovoltaic panels and a heat pump, because she herself sees that it brings benefits. The question is how many people in Poland will have access to these benefits. So far, it is a small percentage of our society that has access to this alternative. If the government unblocks funding from the European Union and additionally unblocks the RES laws, the benefits could reach even more citizens. Therein lies the current challenge. The question is whether we will take this mission, or whether we will be blocked and pushed into new crises. That’s the question.

Do you have a comment on the permission to use lignite in stoves across Poland?

The president of Law and Justice (PiS) Jarosław Kaczyński recently said that in order for Poles to be warm enough, they may burn anything but tires and allowed the burning of lignite. It’s probably the most toxic fuel we can use in our country. Except maybe burning tires. Lignite has harmful substances in it. The Polish Smog Alarm is horrified, because years of fighting for clean air and people’s health in the country were buried by the president of PiS in one press conference. If there is a green light from the very top to burn such poisonous fuels, then people feel that they can and will do it, poison others, because they are in a situation where our government does not offer them any other safe and clean alternatives. The Minister of Climate and Environment does not give people any alternatives and does not fight to unlock important RES laws. I would like to see what actions the Ministry of Climate and Environment is taking towards a real phase-out of extraction and burning of lignite, because so far, it seems that such actions do not take place. This whole situation shows that the government has caused complete chaos in the energy sector and is not interested in real solutions, changes.

So what if it’s not popular? People will use anything. I read an article about the fact that the inhabitants of Rybnik had the opportunity to draw coal on the lottery, maybe the minister Anna Moskwa should also read it.

Another protest of the Youth Climate Strike in Warsaw
Climate Policy Environment
On Friday, May 24, the Warsaw youth will leave the school for the third time in order to fight the passivity of politicians on the progress of […]
More